Here I am in language boot camp: a week focused 24/7 on immersion in a foreign tongue. I had the easier role, however, here in the outback of Poland. We 20 Anglophones from the U.S., Britain, Ireland, Scotland, Canada, and Australia, helped 20 Poles (professionals with a textbook grasp of the English language) to gain fluency and confidence in conversational English, interacting with accents of every stripe. (I, too, had trouble wading through the Irish lilt and Scottish burr.) The age gamut ran from a sweet Polish lass of 20 to a 70-something British gent.

After meeting up in Warsaw, we drove through corn and cabbage fields to a resort in a hamlet of two dozen houses centered around a beribboned Jesus on the roundabout and a convenience store the size of a closet. Lodging was free (free!) for us Anglos, as were meals, six to a table, three of each tongue. Polish beer cost $2, vodka was $1 a shot, so the evening’s bar bills didn’t pinch. 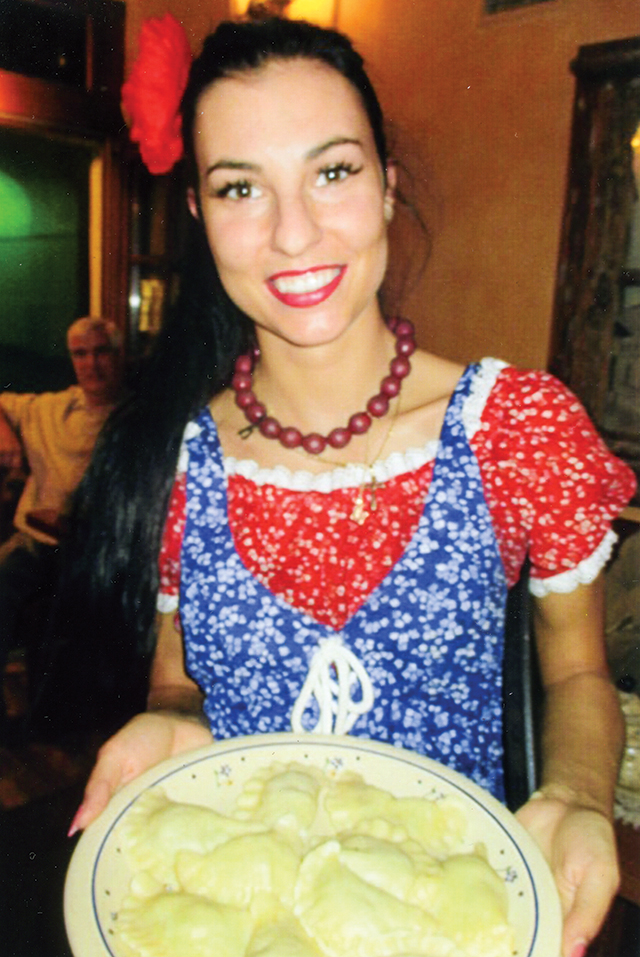 After a breakfast of cheese, sausage, pâté, yogurt, cereal, cukes and tomatoes, eggs, and the occasional (yea!) donut, we launched into a series of one-on-ones: free-ranging, hour-long conversations with a rotation of participants. The “How many children?” blah-blah soon gave way to more intense personal and cultural exchanges, like the Poles’ high cost of leaving home (at age 35); differing views on Syrian refugees; one exec’s frustration with the Catholic church, another’s with a job search, and frank reminiscences about growing up under Soviet rule: “All black and gray — no color. Day-long queues when something was delivered to a store before we even knew what the ‘something’ was. Worst of all, no free talk: anyone could be an informer.” In other words, no topics barred, and lasting friendships formed.

Chats were punctuated with activities in groups of six, which were presented with a scenario to work on: maybe, a failing restaurant had to reinvent itself, but how? Staff cuts? New menu? Publicity campaign? Each team presented its solutions to the rest of the group. Another day’s exercise asked teams to choose the six most valuable people who ever lived to repopulate a destroyed planet (Einstein vs. Mother Teresa or Oprah, for instance).

Each Pole needed to prepare an individual presentation on the topic of his choice for the final day with the help of an Anglo mentor. Oksanna taught us about Ukrainian cooking; health-care professional Monika gave a power-point talk on the substandard ultrasound equipment used in Polish hospitals; Marta explained the challenges of mountain climbing; and Sojia prepared a mock job interview. We Anglos helped with nuances, correcting “I am exciting to meet you,” “I come from a short family” (i.e., “small”), and “roads like Switzerland cheese.”

After lunch, 90 minutes of free time to nap, read, or roam the countryside. And after dinner, game time. We formed teams for Trivial Pursuit and Pictionary or nutty skits. Then, the studious (or exhausted) headed for bed and the rest of us bellied up at the bar.

Was the experience challenging? You bet. Was it worth it? You bet, again. How else can someone like me venture to Poland and talk to anyone beyond waiters and taxi drivers — really get to know individuals on the other side of the globe? Maybe we’ll meet up again someday (lots of invitations). For now, Facebook friends forever. For info, visit www.angloville.com. 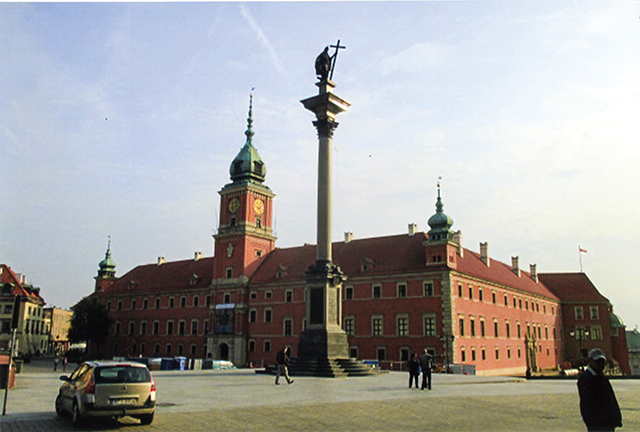 Warsaw was savagely flattened by the Nazis in reprisal for the courageous but doomed Uprising of 1944, today relived in the Warsaw Uprising Museum’s reenactment of that heroic 63-day struggle and life under the Nazi regime.

Facades of the charismatic Old Town have been rebuilt exactly as they stood in the 18th century; the main square vibrates with a lively mélange of outdoor cafés centering streets that meander to the castle, the cathedral, and homey restaurants celebrating the trinity of Polish cooking: pierogi, borscht, and roast duck with red cabbage. From Sigismund’s Column, honoring the king as he reigned in 1644, a lovely avenue nicknamed Beautiful Street gleams with Baroque facades such as the face of a church that harbors the heart of Poland’s favorite son, composer Chopin. (Benches along the avenue play his melodies, as does the airport named in his honor.) Pick up a brochure or check www.freewalkingtour.com for a guided introduction to the Old Town and beyond.

We also joined a free tour of Jewish Warsaw, once second only to New York in Jewish residents — 400,000 before mass murders; 3,500 today. Our guide, Agata, led us to the Monument to the Ghetto Heroes, rising from the site of a former synagogue, then on to Umschlagplatz, aka Transport Square (next stop: Auschwitz) and the engaging new Polin Museum, which interactively recounts 1,000 years of Polish Jewish history. Nearby stands a memorial statue to a spunky kid named Raymond Liebling, part of the Jewish Resistance. You might know him by his adopted name, Roman Polanski, who recreated the times in his film The Piano.

In a tour of communist Warsaw, our guide, Agnes, recounted her parents’ dealings in black market dollars and hours spent in shops’ queues as we walked by bleak Soviet Realism buildings to the former censor’s office, then to the (unwanted) gift from Papa Stalin, the Palace of Culture and Science. We lunched at a milk bar (cheap, filling, and hostile, just as in Soviet times), then fled to the city’s art museum to view marvelous altarpieces redeemed from medieval Polish churches, then a decade-by-decade history of Polish modern art. 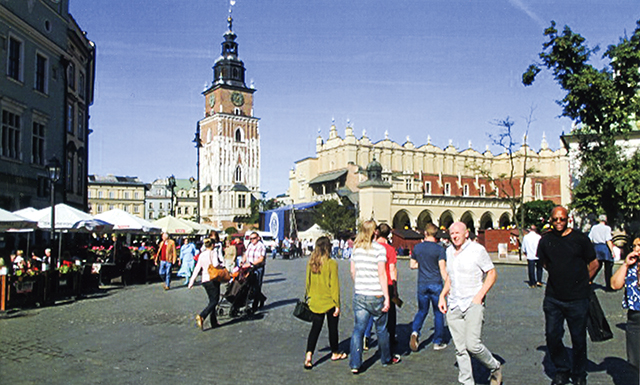 “There’s nothing to see in Krakow!” declared our guide in Warsaw. Wrong. But she’s right about the rivalry that sizzles between the former and present capital cities. Krakow’s Main Square was teeming on a sunny Sunday, crowded with food stalls selling kebabs, pierogi, and beer aside a stage where senior songsters in national costume performed while hepcats in the crowd pranced a lively polka. At the top of every hour, eyes turn to the square’s cathedral where, from a top spire, a trumpeter trills (yes, “The Trumpeter of Krakow” of storybook fame). Inside the church, majestic stained glass windows gleam in the sun.

This time it’s the real deal, not reconstructed, for the Nazis conquered the city six days after the start of the war and kept it intact, including the vast Wawel Castle dominating the hilltop like a red brick Polish Pentagon. Near it, our Old Town walking tour led to the university, founded in 1369, where Copernicus once taught. It’s close to the Franciscan church of Pope John Paul, whose stained glass windows are beauties of Art Nouveau.

The Jewish tour is one of the most popular, and moving, investigations of life before and during the war. Several synagogues remain, as does the medieval cemetery, and edifices that housed schools, hospitals, and social centers. Today the new Galicia Jewish Museum commemorates, in photographs, the Jewish synagogues, cemeteries, and other sites throughout the province destroyed by the Nazis, and the humiliations, and worse, these people endured.

Close to the major camp-transport site stands the Eagle Pharmacy, run by a Catholic pharmacist who saved many Jewish lives through his underground activity (firsthand accounts and photos from ghetto residents fill in the blanks), and, across the bridge, there’s the now-famous factory of Oskar Schindler, another savior, open to tour. Beside it stands MOCAK, the city’s museum of contemporary art.