Playing For The Other Team: Simon Dunn Isn’t Wasting Time

At 6’1” and 215lbs, not many would attempt to pick on Simon Dunn. A lifetime of rugby combined with intense training for the Australian Olympic bobsled team have given Dunn an imposing physique that would ward off most bullies. Nonetheless, three years ago, Simon woke up in a Sydney hospital emergency room with black eyes and chipped teeth, the victim of a brutal gay-bashing.

“It’s really soul-destroying to have someone bash you because of who you are.”

Who Simon is, what he stands for, and what he has overcome, are reasons why he’s coming to help celebrate the opening of Minneapolis’ new gay sports bar, Game, this month. Well, that and being voted #1 in Attitude Magazine’s Hot 100. 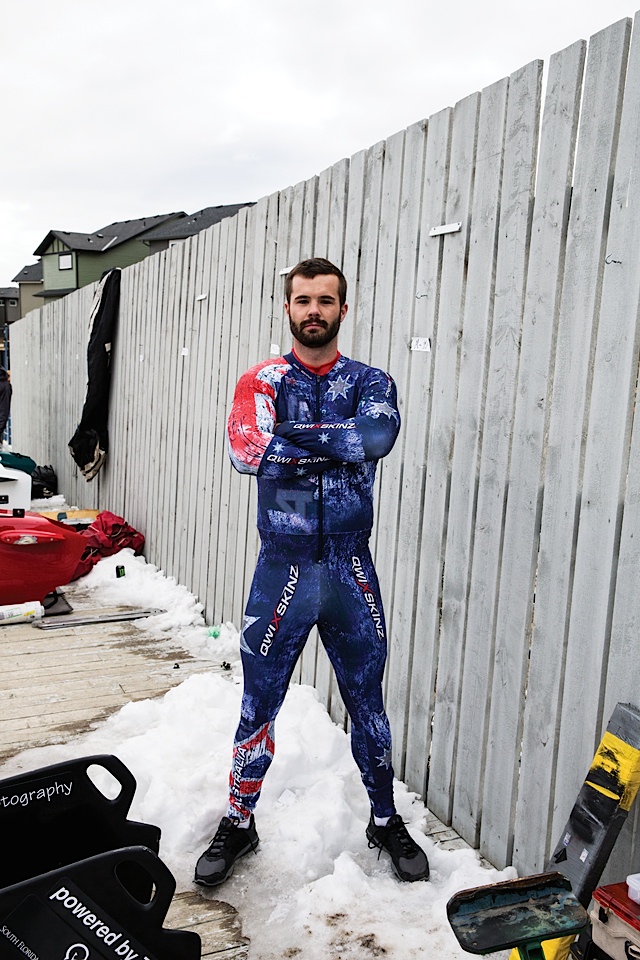 Growing up an hour south of Sydney, Simon did what all other boys in his hometown did: played rugby, which is as popular in Australia as is football in the States. Naturally drawn to sports, and hyper-masculine sports like rugby at that, Dunn soon came to realize he was also naturally drawn to men. “I was about 12 or 13 years old and I started to realize I wasn’t like the other kids.” As he struggled with these feelings, fear of rejection from friends and teammates kept Simon in the closet throughout his school years, until the burden became too great. “It kind of got to the point where it was hard lying to myself and everybody else about who I am.”

Revealing his secret didn’t make life any easier. Teammates and family both struggled with the shock of their newfound knowledge.

“It was definitely a surprise. No one ever expects a sports person to be gay. People, especially teenagers, they have such a general view of what gay men are.” And not a positive one, according to Simon, especially due to inaccurate and stereotypical media portrayals. Simon remembers his mother’s initial reaction as being tough to bear. “My mum, she had this idea of what my life would turn out to be, and when I told her — I had years myself to come to terms with it — and when I told her she only had a moment really. I understand where she was coming from, because when you come out it’s not always just about you; it’s about everybody around you.”

For a period of about six years, Dunn bought into the myth that gay men couldn’t, or shouldn’t, play sports. Shortly after coming out, when teammates expressed discomfort, he quit rugby and moved to Sydney in an attempt to find a fit. Self-acceptance of his sexuality was a struggle.

“I basically went to too many bars and too many clubs and tried to be a part of that scene. And the entire time you’re always unhappy. I never felt like I fit in. I was trying to find where I [did] and I didn’t think sport was it, because the institution of society tells you that gay men can’t play.” 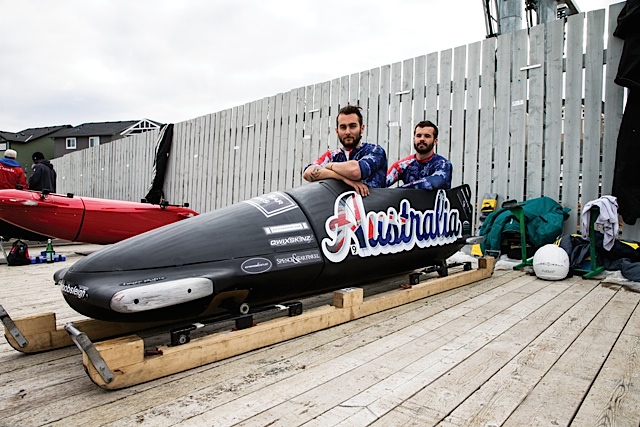 While living in Sydney, Simon became aware of the Sydney Convicts, a gay and inclusive rugby club. Buying into society’s views on the intentions and motivations about players on a gay team, he avoided trying out. “It just took me a long time to make that jump. You have this perception that maybe they’re not there for the sport. But then I joined up and rugby is why they’re there, no other reason. And I discovered that there were people like myself on the team who had grown up playing the sport, and my sexuality was welcome there. I felt comfortable. Playing with the Convicts made me realize that sport was where I belonged and that my sexuality shouldn’t mandate whether I should be able to play or not.”

It was while Dunn was playing with the Convicts, finally comfortable in his sexuality and place in life, when he and a (straight) teammate were surrounded one night.

“We went out after every game obviously to have drinks. We went to Oxford Street (home to Sydney’s main gay district) and went to leave, and we are just walking past this bar, and the last thing I remember is these guys yelling slurs at us, and I woke up in the hospital. I feel kind of sorry for [my teammate] because he was straight and got gay bashed. It went to the court system, and out of the six people they couldn’t prove who was the one that hit me, so no one got charged. It took a lot out of me mentally; I got beaten up on the corner of Oxford Street. That was like my own street. I’m six-foot-one and almost a hundred kilos. If that can happen to me, imagine someone smaller. It’s a horrible idea.”

Shortly after, Simon moved to Canada to continue his rugby career but instead quickly found himself being recruited to try out for the Australian Olympic bobsled team whose members also trained in Canada. Dunn made the team, and hopes to compete in the 2018 Winter Olympics, though first needs to maintain his spot at a second tryout in September.

Serving as the brakeman on the two-man sled team, and the second man on the four-man team, Dunn’s training focuses on speed and power. “In the four-man, the middle runners, we’re kind of the engine of the sleigh; we have to get it going. We push the sled over 60 meters to pick up speed before the pilot takes over and takes us to the bottom.” A combination of Olympic lifting and sprints make up the majority of his routine. “You need to be strong enough to move the sleigh, and it’s 200-plus kilos, but you also need to be fast enough.” 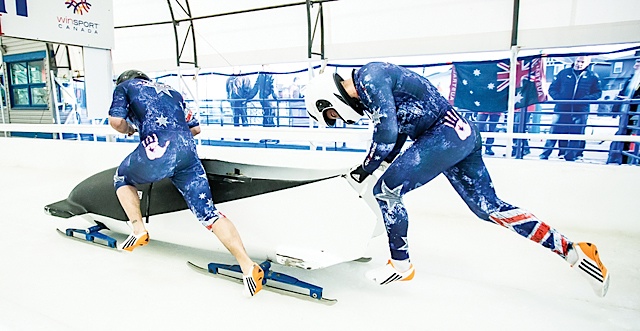 Dunn trains two to three hours per day, six days a week, in Calgary, Alberta, lifting for all six of those days and sprinting for three. “Wake up early, go train, work, go home, sleep, do it again. It’s kind of a boring lifestyle, but I’m here for a reason. Bobsledding has given me a platform. I don’t want to waste what I’ve been given.”

Lending his voice to gay advocacy as an out gay athlete, after all that he’s endured, is of primary importance to Simon, who didn’t have a similar idol to look up to during his own formative years. Even from Calgary, his eye is on his home country. “[Australia] still has a long way to go. We don’t have same-sex marriage yet, which is abhorring for a developed country. If I was to meet someone and wanted to get married, I’d like that to be [in Australia] because that is my home and it always will be.”

Simon has not yet been to Minneapolis, and the idea of a gay sports bar excites him. “In all my travels around the world, I’ve never seen one. It’s good that we’ve come that far; we have sports bars for the gay sports fans.” He has, however, heard of our own gay and inclusive rugby team, the Minneapolis Mayhem. Presented with the idea that perhaps he’ll find a date here, he laughs.

“I should have an excuse to come back.”

Simon was cheerfully game to answer our rapid-fire questions.

Do you have a celebrity crush?
Simon Dunn: I’ll say Steve Grand. He’s going to be at the opening [of Game Sports Bar in Minneapolis].

What’s your dream date?
SD: Going to the beach, going to watch rugby, and then grabbing beers afterward.

What is your favorite form of exercise?
SD: Olympic Lifting.

Are you single or in a relationship?
SD: I’m very much single. My dating life is pretty much non-existent.

Are you a clean or messy person?
SD: I’m very clean. Very tidy.

How would you describe your style?
SD: Sweatpants. I work and train in a gym.

What do you do if you have 30 minutes free time?
SD: Nap

What’s the best gift you’ve ever received?
SD: My sister making me the godfather of her two oldest kids. She has two sets of twins, so it’s the two oldest ones. Family is big to me.

What’s your favorite TV show?
SD: Wentworth. If you like Orange is the New Black, you’ll like this show.

What do you absolutely hate doing?
SD: Being Idle.

Anyone in particular you’re cheering for in the Summer Games?
SD: Not really, no. Because of where I train, I have a lot of Canadian friends competing for Canada. So, should I cheer for Australia or cheer for Canada? I think I’ll cheer for my friends.