Playing For The Other Team: Shelly Bean the Sports Queen 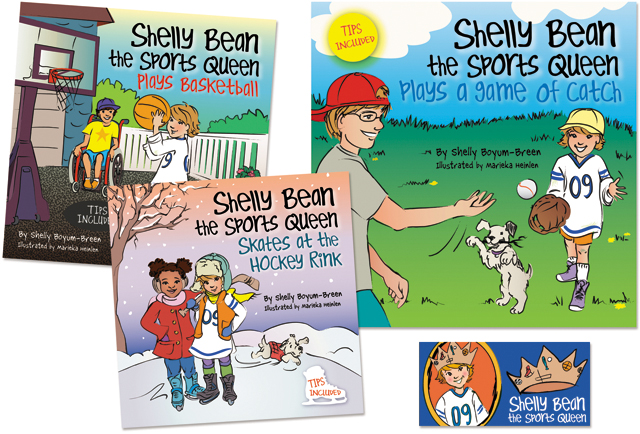 In 1993, Shelly Boyum-Breen was my role model. She was “Coach Shelly” to me then. Mom and Dad had sent me to St. Ben’s for Blazer Basketball Camp with a couple hundred other middle school girls, in my middle school memory at least, and I had never been more nervous. I was living away from home for a week. And each day was devoted to basketball, a sport I desperately wanted to be good at, but despite my tomboyish demeanor, I was just pathetically average. Still, I hung on every word the camp coaches and counselors said, none more so than Coach Shelly.

I was in awe the moment I saw her. Immediately, she was “who I wanted to be when I grew up.” Tall, short-spiky brown hair, cracking jokes, twinkle in the eye, big smile. From what I could tell, Shelly was a GREAT basketball player and all the other campers were just as enamored as I. The three pictures I still have from camp show: 1.) campers hanging all over Coach Shelly during “movie night;” 2.) Shelly grinning in the doorway of the dorm room I shared with three other over-eager middle school girls; and 3.) me, sweaty—horrible permed bowl cut and all—holding a certificate and smiling idiotically with a giant mouth-guard still in, standing next to another camp counselor.

I don’t remember much more about that basketball camp, but I always remembered Shelly. Which is why, two years ago, when I saw her walking down the streets of Minneapolis (both of us on our way to a Lynx game), I had a serious case of small-world syndrome and recognized her immediately, twenty years later. As is the norm when you run into old acquaintances, we became Facebook friends, and I noticed she was writing a children’s book series. And not just any book series, but that of a rough-and-tumble little girl who loves sports. After a successful Kickstarter campaign, the Shelly Bean the Sports Queen series (illustrated by Marieka Heinlen), which includes the titles Plays a Game of Catch, Hoops It Up, and Skates at the Rink, is now available for pre-order.

The “real” Shelly Bean humored me with a Q & A.

(From left) Coach Shelly in the dorm; Boyum-Breen in well-coordinated sport fashion; Nell Gelhaus (on right) with a perm and perma-grin.

Why write the Shelly Bean series?
Shelly Boyum-Breen: I vividly remember the Scholastic book order form from elementary school. As the only girl in my class that played sports, I, like the most of the boys, gravitated to books about football, hockey, and basketball.  But never in the choices listed was there one about girls playing sports, no one who looked like me.  The Shelly Bean series is me…age six. When I was that age, some traumatic things happened that altered my course in life. A neighbor molested me for a period of time, and I was hit by a car and had to sit out of Phy. Ed. & recess for a month. There is a very personal side to Shelly Bean. She is the girl who gets to grow up in a way that I couldn’t. She gets to make a fresh clean start at life, innocent and trying new things.

Did your parents encourage you to play sports, or did you have siblings that played?
SBB: My parents were awesome. They always encouraged me to play and came to every single game I had, even away games. And oh yes: four older brothers. I grew up going to the ball park, watching them play Little League. A few of them played golf and football in high school and the brother closest to me in age was a successful three-sport athlete in high school. I thought he was so cool.

What did you play?
SBB: Basketball, football, golf, volleyball, tennis, hockey, softball, etc….you name it, I tried it.

What were your feelings about sports as a kid?
SBB: I lived and breathed sports. I pitched against the side of the garage and dented it until my dad came home, played out football and basketball scenarios in the yard and driveway. You know: “3,2,1…Oh no! She was fouled!” My friends and I even built the most awesome dirt bike track in the woods behind the house and started our own karate club after Karate Kid came out.

Did you ever feel like you didn’t get the same opportunities as boys?
SBB: I didn’t know any better until 5th grade. There were only a few of us girls who went out for basketball and we played with the boys. Then, all my guy buddies got to go out for football—pads and everything—and I wasn’t allowed to do that or play hockey. I had a friend, Misty, who was the only girl in town who played hockey. We had no idea how rare that actually was.

In the series, what obstacles does Shelly Bean have to overcome?
SBB: Shelly is six, so she thinks big, but is innocent enough that she doesn’t know the basic steps. Remember being a kid and fantasizing about being “big time”? She watches an Olympic women’s hockey gold medal game and imagines being there. But wait: she doesn’t know how to skate yet. When my twin nephews were six and starting youth basketball, they showed up in the gym for their first practice and asked where the TV cameras were! They had seen so many Timberwolves games, Lynx games, and so on that they just put themselves there. I want readers to put themselves there.

Who is your ideal audience?
SBB: Parents and teachers and aunts and uncles who want to see their kids influenced by a strong girl. This isn’t a girls’ series. This is a series featuring a strong girl. I had involved parents, four brothers, and I have nine nephews and four nieces. Most of my best friends growing up were boys and they knew me for me. This series is for all kids.

How many Shelly Bean books do you have planned?
SBB: I’ve written the outlines to 22. Eight more have serious potential right now but I have to make sure people actually like them.

Any aspirations to expand the series?
SBB: I have a lot of plans: expanded series, middle reader books with deeper plot lines, but in the end, if there isn’t a following, we’ll wait. I can honestly say that making Shelly Bean come to life is my greatest accomplishment and gift to myself. I could walk away right now and be good. I have had the best time doing this and have had so many amazing conversations with people along the way about how important this would be to them. That makes my heart sing. And, I’m healed. Truly healed.

Last question: Do you think Title IX is still important?
SBB: Did you notice that Shelly Bean’s jersey number is 09? Can’t imagine a time that equality is ever not important, right?

Shelly Bean is, of course, drawn to resemble Shelly Boyum-Breen. But I look at her and I see me. And I bet that holds true for thousands of other young girls out there. I’ve already ordered copies for the library in the small Wisconsin town where I grew up, because I’m sure there’s a girl huddled in a corner there, like I was, reading all the old Matt Christopher books I dog-earred. She probably has a haircut she’ll regret and desperately wants to impress her friends in a town where succeeding in sports is the best way to do it. Maybe she’ll get lucky and be sent to a camp where she’ll meet a role model that she sees herself in, to give her hope and confidence. It’s 2014, I’m 34 years old, and, of course, now the six years age difference doesn’t seem as monumental as it did at 13, but one thing remains the same: Shelly Boyum-Breen is still who I want to be when I grow up.

How do I get my hands on Shelly Bean books? At www.shellybeanthesportsqueen.com, use code Bean14 for purchases over $30 to get 22% off.