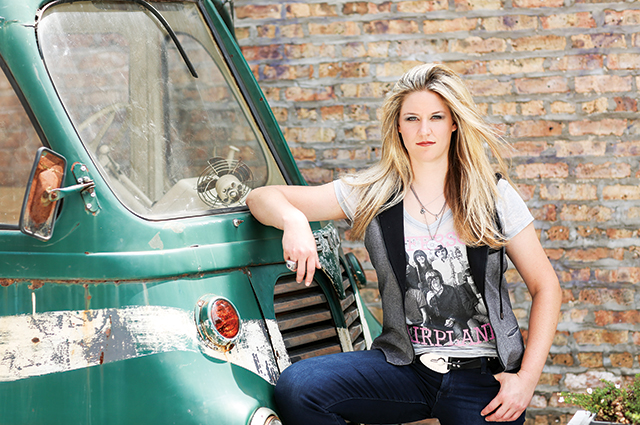 I remember my initial introduction to Sami Grisafe vividly, as one does most painful experiences. Flat on my back in the dirt and grass, I was staring up at a blue sky, breathing hard and trying to figure out how I got there. I slowly stumbled to my feet and turned in time to see the beast that had just flattened me charge down the field and pancake another of my teammates. And there was Sami: blonde ponytail underneath a black helmet, arm poised back to release a tight spiral into the outstretched arms of her receiver, who took off up the sideline. As a defensive end in this women’s semi-pro league, it was my job to prevent that exact scenario. I failed miserably. It was a (literally) breathtaking glimpse both at the world of women’s tackle football and at the throwing arm of a woman some have described as being the female Joe Montana.

Sharing this experience with Sami four years later, she laughs, “Yeah, my O-line doesn’t mess around. They are truly the reason I was able to do anything well as a quarterback.”

She did more than well during her time with the Chicago Force Women’s Tackle Football Team (and Team USA), and her long list of awards is a testament to her unique talent on the field. From 2007–2014 Sami herself was a force, winning Offensive Player of the Year twice, team MVP twice, and All-American honors in two different leagues each year of her career. She also led the U.S. women’s football team to gold medals at the IFAF Women’s World Championships in both 2010 (Sweden) and 2013 (Finland), winning the tournament MVP for the latter.

When she finally retired last year, the Windy City Times ranked the occasion as number one in the Top 10 Chicago LGBT Sports Moments of 2014.

“[Retiring was] definitely difficult, as is any major change in life. I was planning on retiring after we won the National Championship in 2013, but decided to come back for one more season. Then, my ACL was torn in a game and I took it as the universe telling me, ‘You should’ve retired last year. This is a sign.’ I exceeded my dreams with football; it’s time to give my other lifelong aspirations the time and energy they require.”

Now Grisafe (pronounced Gris-AH-fee), who has devoted much of her adult life to football, can focus on her rapidly rising music career. Growing up in Redlands, California, the daughter of parents who made up the country duo Two of Hearts, Sami picked up the guitar around the same time she picked up a football: at age 10. “I was too busy with sports to spend the time it required. I picked it up again at 18 and it stuck. I was given my first ukulele on my 20th birthday and have been playing both instruments ever since.” She spent her childhood tagging along as her parents performed at state fairs, parties, and weddings all over California. Her parents also encouraged her to give acting a try, which ultimately led her to the Chicago College of the Performing Arts at Roosevelt University on scholarship.

Sami, who is openly gay and currently single, says, “I knew I wanted to be on the stage since I was about four years old. I spent most of my early years trying to sound like a Disney Princess, trying to be more feminine. So, I guess you could say I’ve been acting for a long time. Pretending like I am someone else is familiar to me. It wasn’t until I came out in my twenties and was strong enough to admit who I was, that I was able to discover my own voice both musically and personally.”

That voice is equal parts Melissa Ethridge and Sheryl Crow, raw and powerful. It drew national attention during a ukulele-accompanied performance of the National Anthem prior to taking the field at the 2013 IFAF Women’s World Championship gold medal game. The Huffington Post called her performance “…one of the most inspiring versions of the ‘Star-Spangled Banner’ we’ve ever heard.” This year, she’s releasing her third album, her first solo project, Brand New Fairy Tale, in “chapters,” two singles at a time, in the style of a digital 45 with an A side and a B side. The first two singles, “Brand New Fairy Tale” and “Tiny Victories,” were released on Valentine’s Day, by indie record label Vicious Muse.

It’s worth mentioning that Grisafe is already an award winning singer-songwriter and well-known in the Chicago music scene. In 2012, she earned six Grammy pre-nominations for her album Atlantis, and in 2013 received the Chicago Music Award for Best Rock Entertainer. She performed at the RedGorilla Fest and OUTlander Fest during SXSW and in other venues such as Chicago’s Metro, Double Door, Cubby Bear, and City Winery.

The title track “Brand New Fairy Tale” has a folk-rock style, and features Eric Himan, inspired in part by the marriage equality movement. The lyrics reflect this, telling a story and delivering a powerful message.

“As of now, I have written all of the music and lyrics to the songs on my albums. I collaborate with fellow musicians…for the arrangement. I say ‘as of now’ because I really love collaborating and am not averse to writing with people whom I admire. I will always write about things that move me: moments from my life, social issues and stories I believe need to be heard. I think it’s important to connect personally to every song I write. Some songs are about experiences that happened to me firsthand. Some are about my beliefs, politics, or something that happened to someone close to me. Songwriting is my way of navigating life.” 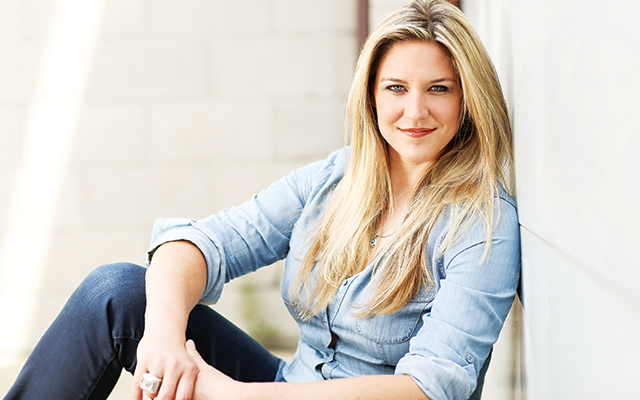 Grisafe’s musical influences are wide-ranging and rooted in the records her parents played when she was young: folk, pop, and rock from the ’70s. Janis Joplin was a particular favorite. “My mom would constantly tell me to ‘listen to the story’ and so lyrics became very important to me. I am still a big fan of Garth Brooks, Tim McGraw, and Reba. And I love ’90s rock! Gin Blossoms, Melissa Etheridge, Nirvana, Foo Fighters, No Doubt, Alanis, Matchbox 20, and my favorite, Counting Crows. In college I was all about Ani DiFranco and still am. I’ve seen her live so many times and every time she blows me away.”

The B side single, “Tiny Victories,” defies any particular musical genre with elements of blues, a little funk, and a little classic rock. With daring guitar riffs throughout, the tight harmonies and raw vocals are a bold statement, conveying a story every lesbian (or not) can relate to: that of a relationship gone bad.

Both singles were recorded at the Chicago Recording Company and feature of the some of the most talented musicians in Chicago including Matt Hines, John Blasucci, Ilaria Lantieri, Logan Penington, and Linsea Waugh. The tracks were produced by the go-to live mixing engineer for many major musical festivals across the U.S., Steve Weeder, and Adam Ayan who has mastered tracks for 20 Grammy winners. Collaboration is significant for Grisafe, something she wants to continue to explore. Having made her footprint in Chicago, she dreams of a national and international fan base, with aspirations that include acting, writing, and speaking. “I want to create experiences that move people to action. Our society does more talking than doing and I want to do my part to change that reality. My great grandmother would say, ‘The less you do, the less you want to do.’ So, I like to stay busy.”

Though she considers California home, Chicago will always be her home away from home. “I moved to Chicago when I was 18 and became a woman here, so it is very close to my heart as it is responsible for so many important memories and lessons. I wrote a song about my dual homes called ‘California’ which will be on Brand New Fairy Tale.”

While living in both cities, Sami supports numerous GLBT organizations and has performed for Human Rights Campaign events and at the marriage equality bill signing at the request of Illinois governor Pat Quinn. For her athletic, musical, and social-political accomplishments, she was named one of the 10 Chicago Lesbians to Look Out For in 2012 by the L Stop.

Minneapolis ranks high on the list of places she’d like to tour, which she will begin doing this fall. “I have wanted to play Minneapolis for some time now, so we will definitely make it a priority to put it on the list of cities for the next tour. I love how the people in the Twin Cities support local music and theater. I think it’s beautiful.”

Just as there was no slowing down Grisafe on the field, there seems to be no slowing her down in her music career either. The official music video for “Brand New Fairy Tale” is currently in post-production, being produced by Vicious Muse and Glam Tie Media and visualized by Ink Factory. She was featured on a March 22 broadcast of OUT Chicago, a local Chicago gay radio show, performed at House of Blues in the Voodoo Lounge in Los Angeles on March 26, and was a guest on LA-based Adam Carolla’s show on March 31. Her album is available on iTunes and her website, www.samigrisafe.com. Look for her soon in the Minneapolis area, and watch out for those offensive linewomen.