Playing for the Other Team: Q & A with Jaiyah Saelua, of “Next Goal Wins” 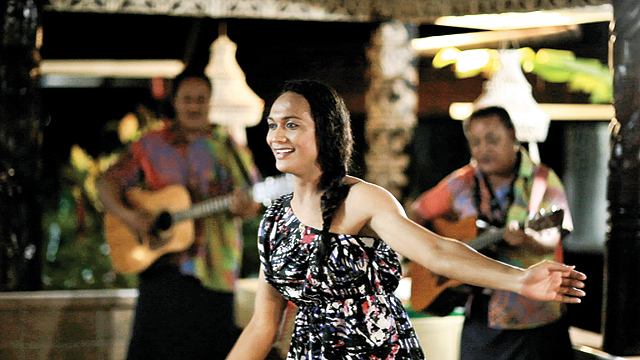 I’m a sucker for a good sports documentary, having spent many a late night glued to every “30 for 30” ESPN doc aired on Netflix.  This being the case, I leapt at the chance to preview Next Goal Wins, the inspiring true story of the American Samoan National Soccer Team and their quest to win a game.  Yep, you read that right.  To win a single game.  Talk about the ultimate underdog story.

In 2001, the tiny Pacific island of American Samoa (an unincorporated territory of the US) stomached a world record

31-0 defeat at the hands of Australia, and headlines across the world dubbed them the world’s worst soccer team.

The film begins ten years later, finding the team still smack at the bottom of FIFA’s World rankings, having scored only twice in seventeen years, and having lost every competitive game they’ve ever played.  Coaches and players have come and gone, and the future of the team appears futile until team administrators petition the U.S. Soccer Federation for help.  Enter maverick Dutch coach Thomas Rongen.  Coach Rongen has one month to make his presence felt and prepare the team for the World Cup Qualifiers.

The most fascinating character in Next Goal Wins might very well be Jaiyah Saelua, a member of Samoa’s recognized and accepted third gender, the fa’afafine.  Fa’afafine are born biologically male, and embody both masculine and feminine gender traits.  Jaiyah plays for the all-male team, though lives 24/7 as a woman when not on the field.  In the film, Coach Rongen crucially promotes her from the substitutes’ bench to his starting line-up for the team’s crunch game against rival Tonga, with awe-inspiring results.  When not playing soccer, Jaiyah studies the performing arts, with a dance focus at The University Hawaii – Hilo.

I had the opportunity to speak to Jaiyah about her experience and her hopes for the film.

Lavender Magazine:  How long have you played soccer, and specifically for the American Samoan National Team?

Jaiyah Saelua: I started playing soccer at the age of 11 while attending the South Pacific International Christian Center School when the association first opened an elementary private schools league. I’ve played off and on for the ASMNST for 11 years – I was drafted at the age of 14.

LM:  In the film, we see previous coaches try and fail to make an impact on the team.  What did Coach Rongen do that was different?  Why did he affect the team in a way no former coach had?

JS: Coach Thomas showed the team that his efforts to make us into better players was genuine by putting himself on our level off the field, and training us really tough while we were on the field. His lessons extended off the training pitch as well, and his willingness to personalize his relationship with each player became the fuel that motivated us to want to become better players individually, but also more importantly as a team. Previous coaches had come to American Samoa with attitudes showing us that they were there to get something done, but did it with no intentions to help us grow as players, having the mindset that we were a hopeless team.

LM: On the field, you’re a defender.   Off the field, every player has their own unique role – what do you feel yours is?  How would you describe your relationship with your teammates?

JS: My role as the fa’afafine is to make sure things stay clean. Not only the rooms and facilities, but more importantly the boys’ attitudes. Whenever I’d feel tension growing between players, I’d crack a few jokes or put on a show just to kill the negative vibes – tension off the field can mean tension on the field. My teammates see me as an equal to them on the pitch, but off the pitch, I become a “sister” figure in a pool of testosterone. Respect is key in making me feel comfortable in the camp – I shower separate from the rest of the team, they never ask to share any of my bedding or toiletries, they look out for me when we travel, making sure I’m never alone, and always defend me when others make a mockery of me.

LM: I saw you breaking the transgender stereotype throughout the film.  In the action sequences, during the game footage, I can only describe your play as “fearless.”  You would literally throw your body in the way of an oncoming attack.  It was inspiring to watch.  Where does this fearlessness come from?

JS: My fearlessness comes from feeling as if I owe it to my teammates to put my feminine ways aside and play as smart and as hard as I possibly can. I have a strong sense of competitiveness, and right before a tackle, I imagine the opposing player hurting one of my family members, and in that moment I need to defend them. Coach Thomas also motivated us in so many ways – by bringing up key phrases from our national anthem which helped us remember how proud we are to be American Samoan; reminding us of Tonga’s (rival team) attempt to overthrow the Samoan islands and how we fought back and regained our home.

LM: Can you provide more insight into about American Samoa’s cultural acceptance of the fa’afafine?  You mentioned in the film that fa’afafine are traditionally celebrated.  The fact that your gender was a non-issue throughout the film is intriguing, especially in light of the LGBT struggle for acceptance on the mainland USA.  Was there any issue at all with you playing for an all-male team?

JS: The #1 aspect of the Samoan culture is respect – respect for God, your family and everyone else, no matter what culture they come from. Respect for one another includes respecting the way someone who is a fa’afafine feels they want to live their life. It is our cultural duty as Samoans to respect the ways of the fa’afafine community, because it is more important to identify someone for who they are inside instead of what they have between their legs. This is why in American Samoa, a fa’afafine will never have an issue pursuing their dreams, just as I had none playing for an all-male team.

LM: Does fa’afafine only refer to M-F transgender, or can it also refer to female-male?

LM: Do/did you encounter discrimination at University of Hawaii?  If so, is it surprising, given your culture’s acceptance and how do you deal with it?

JS: I did encounter discrimination at the University of Hawaii at Hilo, once. When I went to try out for the men’s soccer team at 5am, in the middle of the warm up, the head coach pulled me to the side and said, “I’m sorry, but I cannot afford to put my boys in an uncomfortable playing situation”, and sent me home. I found myself walking home at 5:15am. I didn’t even get the chance to show them how capable I was of playing.  As soon as I got to my dorm, I sat outside the door and cried for a good 10 minutes, took a cold bath, and headed to my first class.

LM:  When and how did you find out you would be starting versus Tonga?  What was your reaction?  What were your teammates’ reactions?  Did you immediately realize the significance to the LGBT community of being the first transgender athlete to compete in a FIFA world cup qualifier, or were you in a live-in-the-moment mindset?

JS:  Coach Thomas pulled me aside the day before our game against Tonga and told me I was starting. My eyes widened and my jaw dropped. An overwhelming sense of nervousness pushed me to the brink of panic, and I calmly promised Coach Thomas I would do my best as I rushed off to seek advice from the boys. The boys were just as shocked, but immediately calmed themselves and drowned me with encouragement. I did not realize the significance to the LGBT community of me starting that match at that instant. It wasn’t until a freelance reporter told me that I realized I was the first ever. Even after he told me, it didn’t sink in until other press asked to do interviews later that day. I was more excited that we won our first game.

LM: At the end of the film, you were looking forward to choosing what to wear for the premiere. Any decisions?

JS:  I mentioned Gucci in the film, but that was a joke! There is no way I can afford that. I planned on wearing something culturally themed, but I don’t have time to fly home to have it made. I bought a few dresses from Bebe, but haven’t decided which one I am going to wear. One thing’s for sure – they all show off my legs!

LM: What are your hopes for “Next Goal Wins”?

JS:  My main hope for the film is that it reaches out to people or teams who feel restrained within their communities to break free and seek to reach their highest potential, not just in sports, but for anything they want to do in life. All I hope to gain personally from this film is the opportunity to advocate alongside other trans advocates such as Janet Mock and Carmen Carrera, but more so in the sports realm.

Next Goal Wins, directed by Mike Brett and Steve Jamison, will kick off the Tribeca Drive-In® series at the 2014 Tribeca Film Festival on April 19th and will open theatrically in select cities on April 25th.  You don’t need to be a sports fan to appreciate the themes of redemption, of acceptance, and of a strong desire to beat the odds.  Anyone in the LGBT community, and probably most beyond, can relate.