Playing for The Other Team: “Mac” is Back

At the Courts at Mayo Clinic Square, Janel McCarville is ready to sit down. Having just completed a three-hour practice, the Lynx finished their morning with a grueling conditioning session. McCarville paired up with Sylvia Fowles, pushing through a series of drills that included resistance bands and individual leg squats that looked exhausting even to watch.

After a season off from the WNBA, McCarville is making every practice count. She was allowed only two days to get up to speed upon returning from overseas, where she played in the Turkish women’s premier basketball league (KBSL) in Kayseri. There are new plays to learn and new teammates to get to know. 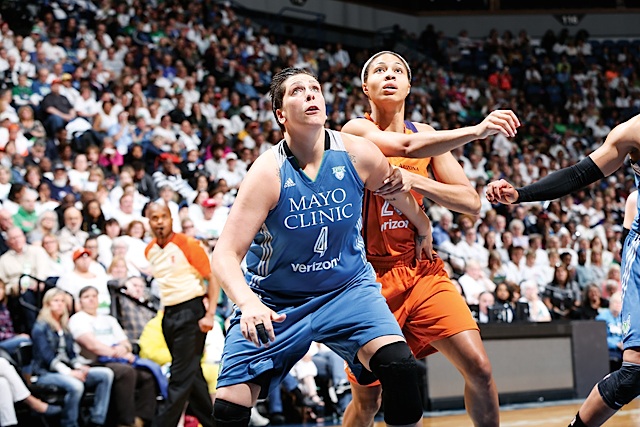 Questions swirled last summer when the Lynx announced McCarville wouldn’t be playing. Was she hurt? Or, like Diana Taurasi of the Phoenix Mercury, was she saving herself for a more lucrative overseas league? Seeing her sitting courtside at most Lynx home games last summer prompted excited chatter amongst the fans, who wondered about her presence in a chair and not on the court.

McCarville says the wear and tear of over 10 years of playing professional basketball finally caught up with her.

“After having played with the Lynx for two years and then oversees after both of those seasons [without a break] I was kind of worn down. My back had been giving me problems and my knee had been giving me problems and I was leaving practices in China in tears because it was to the point where I couldn’t even stand up straight. Obviously they want me on the court and they were pushing me to play. I mean, mind, body and soul, I was struggling. So I needed the time off.”

Staying healthy is McCarville’s biggest challenge at this point in her career, and requires continuous extra effort. Post-games, while everyone else enjoys celebratory beers or goes home to rest, she’s spending extra time working out her back and hamstrings. This may be part of the reason why she’s comfortable in her new role as support for starter Sylvia Fowles and Rebekkah Brunson. She’s prepared to step in when called upon.

“If Sylvia’s out to dominate, I’m not sitting on the bench pouting. I’m engaged and having fun. I want to sit on the bench and have her do well. And cheer and be a fan. I want to be able to step into my role and let her catch her breath and fix her head or whatever needs to happen to get back into the game and continue to dominate.”

After her summer sabbatical, McCarville made it clear that the Lynx were the only team she’d consider playing for. Not only did she have loyalty to the team with whom she’d won the 2013 WNBA Championship, but Minnesota is closest to her hometown of Stevens Point, WI. It’s obvious from the way she describes her connection to her family and the 160-acre hobby farm where she grew up, with cows, pigs, chickens, ducks, and pheasants, that “home” is a priority. In fact, she was disappointed that an upcoming game would cause her to miss cow vaccinations with her family.

“My father and family still come to the games. I have friends in the area. I have the ability to be home. I was home yesterday. I am missing vaccinations for the cows this weekend! I am pissed! I enjoy that stuff.”

Home is where she eventually plans on building a house, on the 20 acres she was given by her parents along with her other four siblings when they divided up the farm. Home is what made her who she is, both the basketball player and the person.

“I loved basketball from the start. I mean nobody in my family played it, my parents didn’t understand it. My father still has no idea what’s going on. I got a basketball for a present — Christmas, birthday, something — and I remember sleeping with that damn thing. My mom bought just a hoop at a rummage sale for a buck fifty, no backboard. I think we nailed it to the barn. You gotta make your own fun. I remember my father grabbing a chair, sitting outside 20 feet away from me, drinking beer, just watching me shoot. I was making some, missing some. But I was having fun and he was having fun. And that’s kinda how I grew up to like it.”

McCarville’s three older brothers would challenge her to games of H.O.R.S.E., until she began to win. “So that kind of got old for them, getting dominated by your younger sister.”

Everything she’s learned, even the exceptional passing she’s known for, was self-taught. Without the money for the basketball camps and private lessons so many other pro athletes grew up with, McCarville had to improvise.

“I’ve grown up playing on a slab that was probably 10 feet by 20 feet long and the concrete was all uneven, jagged. The ball was bouncing in different directions when it went down. I kind of got accustomed to handling shitty situations. With the barn on the one side of that concrete, I would throw behind-the-back passes off the barn, catch it and shoot it. I was like my own passer, rebounder, and assister all in one.”

The Lynx have started the season strong, and McCarville already has the start of a 2016 highlight reel, with a falling-to-the-ground, behind-the-back assist to Renee Montgomery making the rounds online. Google it. The play almost rivals the 2013 finals highlight of McCarville running out of bounds, and passing behind, no-look, between-the-legs to a teammate for an easy layup. Awareness is instinctual for her.

“I have great players around me. They know what they should do, so for me it’s just putting the ball in position for them to do something with it. I looked before at the three-point line and saw she was coming, so I knew she would continue to come. That was all. I would rather make someone look good than score two points.”

Though McCarville was a force to be reckoned with in high school, it wasn’t until her college career with the Gophers (with teammate Lindsay Whalen) that she realized she might be able to play professionally. For girls with similar dreams, she says, “If you want to play, play. Do what you can do. Practice. Don’t let anybody hold you back. You know I’m kind of the proof for that in the aspect that I come from a farm. I never went to camps. I didn’t have the money for it. I was wearing raggedy shoes. I liked it. I wanted to play. I didn’t let anybody stop me and when I got the chance I balled out. [That] carried over into my life as well.”

In addition to being a positive presence on the court, McCarville, who is gay, also has been a positive influence for the GLBT community just by her mere openness. She considers herself active in the GLBT community, though not an activist. GLBT Lynx fans have long cheered extra loud when she plays. McCarville herself is a little oblivious to the attention.

Her approachability has led to a healthy Twitter and Instagram following and she says she always attempts to respond. Certainly she’ll gain plenty of new followers this season, especially during Pride week. By the way, she’s single. Good luck, ladies. And you better like farm animals.