Playing For the Other Team: A Win for Transgender Rights, But Hurt Remains 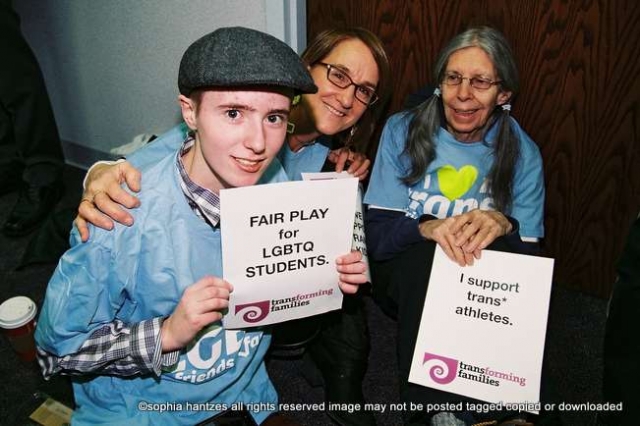 The bathroom. A place to pee, apply Chap Stick, kiss the cute girl from the bar…or, a place to be ID’ed, thrown-out, beaten, or tased. The latter is reality for our trans brothers and sisters and the setting of our community’s most recent battle.

“The thing that is hardest for me is…I pass very well, which is fine…but I know when I grab that handle to that bathroom or that locker room, I’m taking a deep breath, thinking, ‘is someone gonna out me?’ You’re always looking behind your shoulder. We’re not going in there to see your son or daughter naked. We are probably the most uncomfortable person in that entire room.”

AJ Fredrick and I are seated at a table in the quiet back room of The Town House bar. With us is Fredrick’s fellow trans activist, Lee Terrell. Both attended the Minnesota State High School League board meeting on December 4, where, in a monumental vote, the board overwhelmingly passed a trans-inclusive policy for high school sports teams. It was a win for the transgender community, though not without struggle.

Fredrick and Terrell are past their high school years, of course, but nevertheless, felt it imperative to attend the meeting in person. “I have a fourteen year old, and she’s one of my biggest supporters,” said Fredrick. “That pushed me to go to this, and to fight for kids. When everyone’s telling you you’re so wrong and you’re a freak, and you’re this predator that wants to see the opposite gender naked or steal scholarships….it’s infuriating to me. Because that could be my kid.”

Children are whom the policy is designed to protect. The purpose of the MSHSL’s policy was first and foremost to allow high school athletes to compete in a “safe, competitive and friendly environment, free of discrimination.” Undeniably, safety is one of the primary concerns of the GLBT community. It’s widely reported that people who identify as transgender are far more likely to experience physical violence than those who are cisgender (people who identify as the gender they were assigned at birth).

Ellen Krug is a lawyer, Executive Director of Call for Justice, LLC (as well as a Lavender columnist), and a trailblazing transgender advocate and educator. She addresses those troubling stats.

“Of all things, this is what I fear most. I can see how a mugging could turn into a hate crime directed to me given my voice. I think about that a great deal. I watch where I walk; I am always vigilant of who’s around me; I pay very close attention to the crime stats for my neighborhood, especially the street crimes/muggings.”

Besides safety, what does the policy actually mean for transgender students? It means they are able to participate in athletic activities in a manner consistent with their gender identity. It provides education for teachers, coaches, counselors, and administrators regarding transgender sensitivity, and ensures reasonable and appropriate restrooms and locker rooms are accessible. It prompts correct name and pronoun usage, and permits a student to dress according to their identity.

Terrell believes that even the fact the policy exists and has been made public creates a healthier atmosphere for students. “Growing up I thought, I’m the only one. I’m weird. I’m different. I didn’t want to be. I wanted to fit in somewhere.” He says the constant back-and-forth transgender youth feel about their place in society can be detrimental. “Being forced to step in and out of who you are—now you’re on a girls’ team, now you’re on a boys’. It starts to mess with your head.”

Krug, too, sees the adoption of the policy as a positive. “It’s all about allowing us to ‘show up’ as human. I do a great deal of speaking about the concept of ‘Gray Area Thinking’: that many people live in the gray but that society is geared around black and white—good vs. bad, right vs. wrong, boy vs. girl, success vs. failure. The reality is that no, much of everything in the world is shades of gray—thank god! Trans people are so gray; we’re the epitome of gray. Allowing us to show up in sports, five years from now won’t be a big deal.”

Getting the policy passed, though, was a big deal, and mired in controversy. The erroneously-named Minnesota Child Protection League purchased two full-page blatantly anti-trans “ads” in the Star Tribune in the past months. The first of these, published in September, read:

“A male wants to shower beside your 14-year-old daughter. Are YOU ok with that?”

The insinuation here, of course, is not a new one targeted at the GLBT community, painting us as sexual predators. The tactic is cheap, and viscerally offensive.

Ellen Krug shares her reaction:. “I was very upset….the ad just showed me that the one thing people can run to is fear. Fear is the thing that unites people; it’s something that’s happened for centuries. That’s what’s worked for tyrants near and far. The people who hate/are ignorant about trans people are united by fear—that somehow we will disrupt their way of life. I was saddened by it, but I also know that the tide of history is on the side of trans people. As they say, we shall overcome.”

Facing backlash, the Star Tribune’s VP of Marketing and Public Relations Steve Yaeger made a statement to the City Pages, saying, “The ad in question met all the requirements of our ad policy. Not much I can tell you about it beyond that.” Pressed to define the Strib’s requirements for refusing an ad, Yaeger declined further comment.

In addition to this startling lack of empathy, the Tribune ran a second ad in late November, which stated:

“The end of girls’ sports? Her dreams of a scholarship shattered, your 14-year-old daughter just lost her position on an all-girl team to a male … and now she may have to shower with him. Are you willing to let that happen?”

Truly, the deception within both ads not only trivializes the struggle of a young person identifying as transgender, but is also grossly ignorant and dangerous.

AJ Frederick’s response? “It’s like they’re trying to make up things to say. You know, first…you’re a pervert. Oh, well, that didn’t work, so, hey, let’s say they’re trying to take our daughter or son’s scholarship away. Obviously, none of these people know a trans person. If they did, they wouldn’t be saying that, because it IS a struggle, and you have to be really strong to survive the ridicule.”

Even Governor Dayton weighed in at the end of a press conference in early December.

“I think some of the hate-mongering that was going on was despicable. The idea that Clay Matthews is going to change gender status to go trample young girls on a basketball court, I mean, it’s just so… it’s ludicrous, but it’s not funny because it’s so hurtful.”

Despite the fact the trans-inclusive policy passed, the hurt lingers. One of the fundamental principles of ethical journalism is the obligation to seek the truth. With the freedom of speech or of the press comes a very real responsibility. In wrongfully characterizing bigoted misinformation as advertising, the Star Tribune has both failed to uphold those standards and failed our community. The Tribune must be held responsible for the pivotal role they played in spreading hate and discrimination. Indeed, our trans brothers and sisters deserve an apology.

To the Minnesota Child Protection League, I say shame on you. Yours is the story of the classic fool whose hatred is fueled by ignorance and fear. Hatred, which propels the precious souls of our trans community to self-injurious behaviors including suicide, and drug and alcohol abuse. You are not protecting children. You have forgotten those who need to be championed the most. I would demand an apology but I mostly desire a remedy for your ignorance. I challenge you to meet our transgender friends, learn their stories, look into their eyes and find your common humanity.

Krug says: “The key is getting to know us as humans. All we want is the same thing as anyone else: a place that’s safe, a decent job, our children to love us, and for them to succeed in the world. We want to love and be loved. We just take journeys that are very different and, all too often, far too public than most others.”

The past few years have been political and personal turmoil for GLB and especially T people, and the scars remain. The bathroom, the locker room, should be safe, and we can at least be thankful that the Minnesota State High School League board got it right.