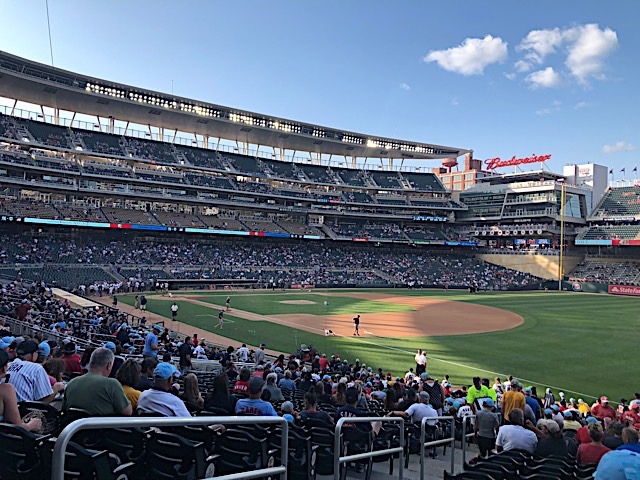 “The way a team plays as a whole determines its success. You may have the greatest bunch of individual stars in the world, but if they don’t play together, the club won’t be worth a dime.”  — Babe Ruth

When the topic is sports, teamwork between teammates is, well, pretty obvious—that’s what distinguishes a team from the cast of a Federico Fellini film.  And success?  That’s pretty obvious, too.  Success is winning games, especially games played in front of the local fans.  But the fans can become a kind of collective teammate themselves, helping the hometown heroes achieve that success.

Within certain limits, of course.

The fans can’t chuck a grounder to the second baseman who tags the bag and throws to first for a double play; the fans can’t perform a no-look pass that’s lobbed around the horn until the center dunks it for two; the fans can’t can’t pass the ball back and forth and back, only to bicycle kick it past the gloved goalie—at least not without getting thrown out by security…

…the fans-turned-teammate might foil an opposing team member’s free throw by turning the glass backboard into a boiling sea of not-see, of flapping ulnas and foam fingers and salty sneers; they might superstitiously spin towels over their heads, as if winding 18,000 jacks-in-the-box in an manic ploy to build morale; or they might confound the visitors’ defense with a ribald chant about the left wingback’s mother.

It makes sense for teams to honor their fandom, or segments thereof, such celebrations casting an appreciative limelight on demographics as various as members of the armed forces or pet adopters or fans of movies, colleges…or even the fans of other local sports teams.

In our capitalist economy, fans are, for or for worse, also paying customers, so that team-to-fans reward manifests in the most American way possible—merch!

PUT ME OUT, COACH

On Friday, July 15, the Minnesota Twins celebrate LGBTQ Pride by offering a “special ticket package” that includes a seat at the game—that’s kind of the way one attends a Major League Baseball games–and an “exclusive Minnesota Twins Pride Night tank top.”  Regardless of how the fans are shirted, the game itself will begin at 7:10 PM, with the hometown team opposing the White Sox, a perfect foil for the occasion since white is opposite of a rainbow.  Also, unless things have changed a lot in the last 103 years, somewhere between seven and nine of the visiting team’s members might be willing to throw the game for an ice cream cone and a new Model-T Ford.

Pride Night, presented by SeatGeek, will be celebrated by Minnesota United Football Club, informally known as the Loons (the birds, not the maniacs), on July 30, 2002, during a game that begins at 2:00 PM against the Portland Timbers (who have heard all the wood jokes to which you could possibly subject them, not that that should stop you).  The reason that it’s being held so late is that “the club does not host a home game during the month of June”…as if the limits of time and space were some sort of excuse.

The Minnesota Lynx are on record as being the first major American professional sports team to celebrate LGBTQ+ Pride.  That stands to reason, since Pride Night is something of a redundancy with the Minnesota Lynx:  if you’ve ever attended a game, you know that diversity is the name of the game, on the court and in the stands—in other words, with the Minnesota Lynx, every night is an unofficial pride night.  That said, on Sunday, June 12, they reaffirm their commitment to acceptance with 2022’s Pride Night.  Spandex headbands, “presented by Xcel Energy,” will be given away to fans, a potentially useful premium when the visiting team is the forehead-sweat-inducing Indiana Fever.  The game begins at 6:00 PM; COVID jokes are highly discouraged.

From the deepest recesses of the Credit Where Credit Is Due File (or for the benefit of any time travelers who might be reading), the Minnesota Wild celebrated its first-ever Pride Night on March 29 of this year.  The team seemed determined to make up for taking so long to do so: fans who bought the proper ticket package received an invitation to a pre-game party (because nothing goes together like adult beverages and slippery, hard surfaces) and an exclusive Pride Night T-shirt.  Once said fans claimed their paid-for seat, they took in the Wild’s on-ice warm up, wherein the up-warming players hit Pride pucks with sticks wrapped in Pride tape while wearing Pride jerseys—a veritable Pride hat trick.

Auctioned off to benefit the Wild Foundation (which, according to its website, “supports pediatric medical causes…and provides fund raising opportunities for youth hockey”) and Children Minnesota’s Gender Health Program (“comprehensive care for transgender and gender diverse kids”), the Pride warm-up jerseys were signed and donated…presumably after being removed by the players.  The pucks were similarly donated to Twin Cities Pride which had an information table at the main concourse.  [Spoiler alert for the time travelers:  the Wild won 4-1, and yes, the gays get all the credit.]

The Babe was right:  the way a team plays as a whole does indeed determine its success…on the field, rink, or court, that success is measured by winning games…but in other, less-spectacular arenas, such as the court room or the voting booth or the public square, where the team is the queer community and our allies, success is measured by winning rights:  the rights to love, to serve, to work, to marry, to adopt…perhaps even the right to play for a professional sports time.  Well, the right to try out for one, anyway.  These victories, these successes, as well as their athletic antecedents, should always serve as a source of Pride.