So, it’s Obama’s turn to host the G20 in September. How to impress the heck out of a bunch of genteel European heads of state? New York? LA? Vegas? Nah. You invite ’em to “American’s most livable city”: Pittsburgh. 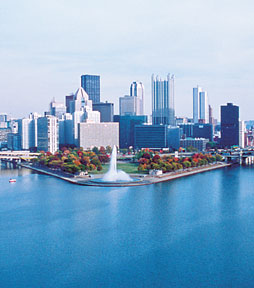 Pittsburgh—also voted a Top Pick for Culture Junkies (New York); One of the Top 5 Cities for Creative People (Kiplinger); and among the World’s Top Ten Cleanest/Greenest (Forbes).

Huh? The city whose coal-belching steel mills caused cars to need their headlights at high noon? Well, that was then—before the ’80s—and this is definitely now Obama chose Pittsburgh to demonstrate that turnaround. Come for the skein of walking trails along the downtown’s juncture of three rivers, spanned by 440 designer bridges. Come for the abundance of pocket parks. But especially, come for its diverse neighborhoods. Mr. Rogers’s was just one of 89, each with its own rich flavor.

And stay for the art: collected by steel mill baron Andrew Carnegie, and now on display in the splendid Carnegie Museum of Fine Arts (plus the adjoining Museum of Natural History, boasting his film set-worthy collection of dinosaur skeletons); Heinz Hall, home of the Pittsburgh Symphony, among 57 varieties of performers; the culture-nailing Pop Art in a museum dedicated to another homeboy, Andy Warhol, brimming with his androgynous portraits, and lifestyle; and the August Wilson Center for African American Culture, debuting in September to honor the works of the Pulitzer-winning playwright who captured the soul of his Hill District, where our own Penumbra is invited to perform.

Maybe the place to start is just where Pittsburgh began in 1765: Fort Pitt, built on the strategic point of land where the Allegheny and Monongahela Rivers joined the Ohio (also the start of the great Lewis & Clark Expedition). It livens the “who knew?” story of the uneasy shifting of power between Indian nations, the French, the Brits, and, eventually, the Colonists that continued to flare long after General George Washington settled things in the East.

The story unfolds further in the Heinz History Center that celebrates “How Pittsburgh Changed the World,” as in headquarters for Alcoa, Pittsburgh Glass, and Westinghouse; the first union organized to wrest justice from industry barons; and grocer Heinz himself, with the savvy marketing campaigns that gave the familiar ketchup label worldwide recognition. It celebrates the contributions of locals, from Doctors Salk (polio vaccine) and Spock (child rearing) to green guru Rachel Carson and her nemesis, the inventor of the Big Mac. 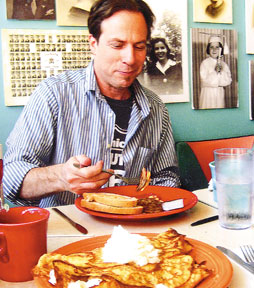 Plus, Mr. Rogers in his rumpled cardigan. Like few others, Pittsburgh remains a city of neighborhoods that retain distinct identity, and intrigue.

Downtown hosts the Cultural District (indoor performances, outdoor public art). Leaving downtown on the Hot Metal Bridge (named for its transport, back in the day), visit the Southside, once Polish red brick row houses and steel factories, now the common ground of blue hairs—Gen Y and the Great Generation, side by side. The Carnegie Library, where seniors congregate, contrasts with Rex, where hot bands blast. Tom’s Diner, where retirees anchor tables on the sidewalk, faces off against ubercool S-Bar across the street.

East Liberty is in the lively throes of the most recent turnaround, where gritty “not after dark” streets now host Whole Foods and designer pizzerias. Lawrenceville offers boho boutiques and cafés, plus an annual Art All Night happening, while Shadyside, with upscale shops, aligns both yups and boomers.

Gay boys are at home, and at ease, everywhere, but especially Lawrenceville, Shadyside, and Squirrel Hill (where the GLBT Community Center hosts OUTrageous Bingo parties). In Pittsburgh, being out is oh-so-in. Bars include the 941 Saloon, Images, Pegasus, House of Tilden, and There, lining the 900 block of Liberty Avenue downtown; Lawrenceville’s Blue Moon or Cattivo; and Shadyside’s Spin Bartini Ultra Lounge.

The Strip, a mile-long stretch, was once the wholesale produce district. Still is. Today, it’s also a stew of multiculti delis and dining ops, including Pamela’s, where Obama, in scouting the town, was so enamored of her pancakes that he invited her to cook them at the White House on Memorial Day. Stop in, and see why.

Don’t miss another Strip icon, Pramanti’s, a diner where sub sandwiches—the specialty—come built with fries and cole slaw heaped inside the buns. Don’t ask for them on the side. The answer is, “Nothing doing.” 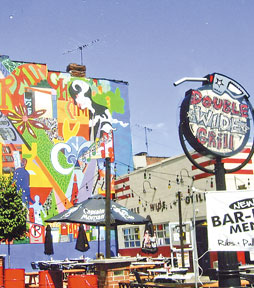 Explore solo, or, better yet, sign on for the walking tour Burgh Bits & Bites to discover food finds known only to the locals, including Mancini’s Bakery, famous for its pepperoni roll; Labad’s, launched by a Syrian family who know how to make hummus, all right; Parma Sausage, to sample homemade salami and prosciutto; and Penn Macaroni, the oldest business down here, hosting a heavenly cheese shop and deli. Interlaced are funky wonders like Big Mama’s House of Soul—Big Mama addresses her many barbecue fans as “baby”—alongside fashionable Lidia’s, an altarpiece of an Italian cucina, where unlimited pasta is heaped tableside from sauté pans by trios of smiling waiters.

A Catholic church-turned-brewery accommodatingly was christened Church Brew Works, where saints in stained glass windows stare down on an altar space filled with gleaming tanks. From those spout the likes of Pipe Organ Pale Ale, Celestial Gold, and Pious Monk Dunkel, to mix and match with the pierogi of the neighborhood’s Polish roots, in traditional plumpings of potatoes and cheese, or contra-trad, humming with jerk chicken.

Oh, yeah: Don’t forget to visit Oh Yeah, where ice cream is considered a breakfast staple, topping waffles filled with your choice of a hundred add-ins, ranging from mango, habaneros, and Lucky Charms to bacon, candied ginger, and peanut butter—and those are just the staid old numbers.

Here’s why Obama’s visitors will feel welcome: The city is not only clean and safe, but also super-friendly. I only had to unfold my map, and sidewalk traffic ground to a halt with offers of assistance. I think they would have carried me, too, had I asked.

See for yourself by contacting www.VisitPittsburgh.com.