Pirandello Classic Given An Inspired Makeover at Gremlin Theatre 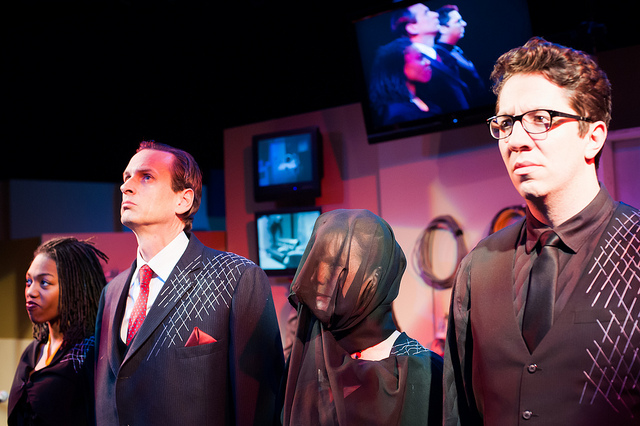 At St. Paul’s Gremlin Theatre, director/playwright ‘Alan Berks & Company’ have crafted an ingenious collaboration inspired by Luigi Pirandello’s 1921 classic Six Characters in Search of an Author. It considers what happens when Pirandello’s characters time-travel and end up on a current day reality tv show. It’s a kind of face-off between what are now dubbed as melodramatic characters from the turn of the 19th into the 20th century and narcissistic personalities of today. But Berks’s excellent group digs well beneath the surface of such descriptions. They achieve a remarkable feat in that to see this show is to palpably experience two totally different dimensions coming into contact with one another – and this is done by the actors. This beguiling Berks collaboration is a fitting final production for the Gremlin which has birthed a marvelous body of productions by classic playwrights over the years with Peter Hansen at the helm. 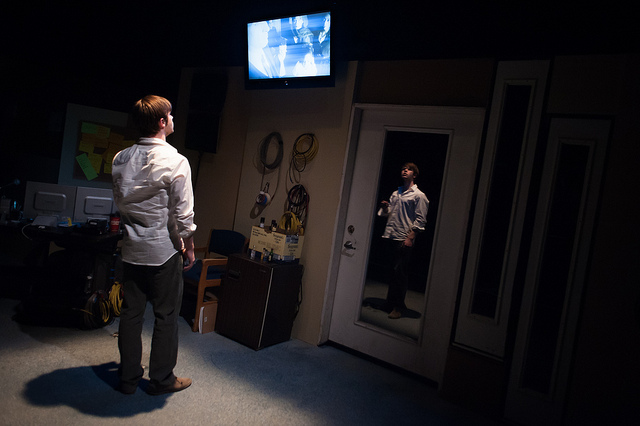 In Berks’s re-imagining, the Italians are steeped in European class structure and even though their callous patriarch is oppressive, even he (John Middleton), is the picture of unhappy male rigidity. Yes, he wields power but he’s paranoid, sexually tormented, sexually oblique, sexually abusive, always grasping and trying to control, and never satisfied. In stunning contrast, the reality show folks are self-indulgent, self-absorbed, crass, and defined not just by income but by use of slang that in a way defines, limits, and coarsens them. Sexual references, and if you’re attractive and forward enough, sex itself, come too easily. This is one of this production’s great insights. (And the collaboration is not antisex either.)

There’s the gay Italian son (Max Wojtanowicz) who necessarily sublimates his homoerotic/romantic feelings because of his homophobic cultural background, contrasted with today’s gay Michael (Michael Terrell Brown), who lets it all hang out and in so doing obliterates the mystery of sexuality and the wonder of another human being. Two extremes. Today’s tendency is to say ‘how far we’ve come’ but when contemporary crassness trumps delicacy, it often intimidates and shuts others down. (Another great insight of this production.) Just as too many glbt activists today think everyone has to be out. End of story. And those of us who are out should guilt trip those who are not and feel superior. 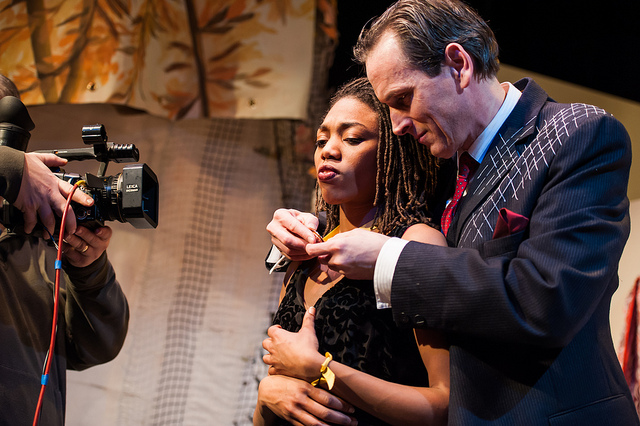 Again, the father/patriarch’s misogyny is obvious but his contemporary equivalent, the reality show producer Bryan (Bryan Porter), is light years more self-expressive but his compulsion for creativity and innovation -two terms seldom seriously questioned nowadays- has a reckless inanity about it. Innovation and creativity, but in the service of just what?

Ultimately, Berks exposes the shallow opportunism that drives pop culture. Then he contrasts that with the dreadful rigidity of a suffocating past. The puritanical vs. the no-strings-attached mentality of postmodern high-tech capitalism. What unfolds is a troubling comparison and contrast wherein neither side can be said to be virtuous. Hence, we are made to face the existential void. I suspect Pirandello would have appreciated that.