If you’re like me and have been to before, you will have already gotten a glimpse into the history of the storied town. There’s Independence Hall, the Liberty Bell, Elfreth’s Alley, Rittenhouse Square, and so many more historic locations that can be covered in a sort of survey tour of the city. Here’s where we go further into the arts and culture scene that has elevated Philly to the status of being informally referred to as the “sixth borough” of New York, as well as visit the history that goes into greater breadth and depth beyond the basics.

Recently, I had the opportunity to visit Philadelphia for a long weekend that coincided with OutFest, the fall GLBT festival which is the largest Coming Out Day street festival in the world, set in the Gayborhood. We had arts on the itinerary and fashion on the brain, getting an exclusive preview of the Patrick Kelly: Runway of Love exhibit that is currently showing at the Perelman Building of the Philadelphia Museum of Art. With fashion on my mind, I give you this short list of what to do and where to dine, with the theme of Fashionable Philly at the fore. 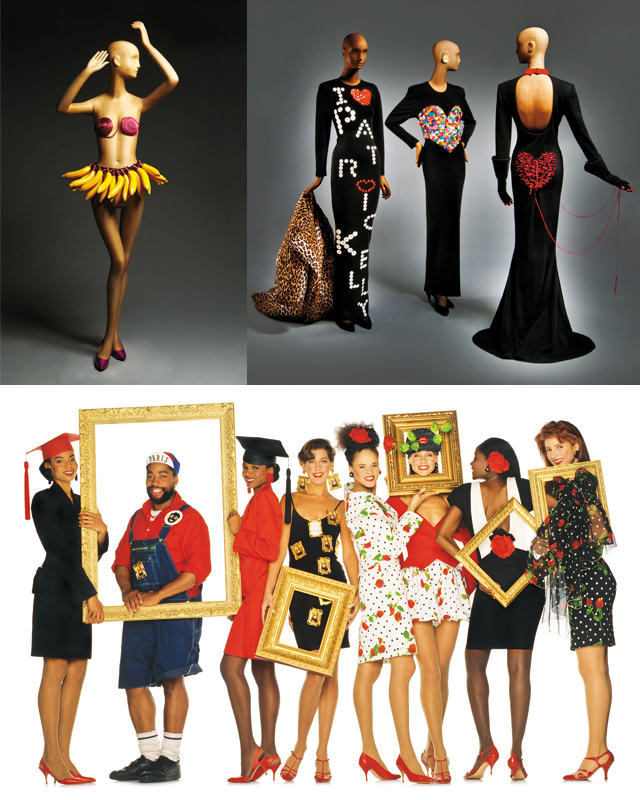 Artists push us forward, whether depicting the past, reflecting the present, or divining the future. Philadelphia’s museums showcase an impressive array of art and artists and, until November 30, you can find a stunning collection of fashions by Patrick Kelly at the Philadelphia Museum of Art’s Perelman Building. Patrick Kelly: Runway of Love is an expansive retrospective showcasing around 80 fashion ensembles that were recently presented to the Museum as a promised gift by Kelly’s business and life partner, Bjorn Guil Amelan, and Bill T. Jones. Kelly was an American-born designer living in Paris who created bright, bold, and joyful creations and, I’d say, gave inspiration to such present-day designers as Paul Frank. Kelly died of AIDS on January 1, 1990, after too short a time in both the fashion world and the larger global community.

Conveniently located near one another, the other museums provide an exquisite fix for the art aficionados. Of particular note are the Rodin Museum, the National Constitution Center (where I saw the most heart-wrenching touring exhibit, Capture the Moment: The Pulitzer Prize Photographs), and the Barnes Foundation (to make it even more interesting, be sure to watch The Art of the Steal beforehand).

When you want to grab some food to go or eat in the hubbub of organized chaos, head to the Reading Terminal Market. Nowadays, it’s packed with vendors and eaters alike, but it was established in 1893 and is the nation’s oldest continuously operating market and, I’ve been told, the model that Midtown Global Market in Minneapolis might have been based upon. Whether a quick stop or a long stay, you’ll find plenty of what you’re looking for at the market (and plenty of what you didn’t know you wanted).

Note: The steps of the Philadelphia Museum of Art were made especially famous when Sylvester Stallone climbed them to the triumphant tune of “Gonna Fly Now” in the movie “Rocky.” 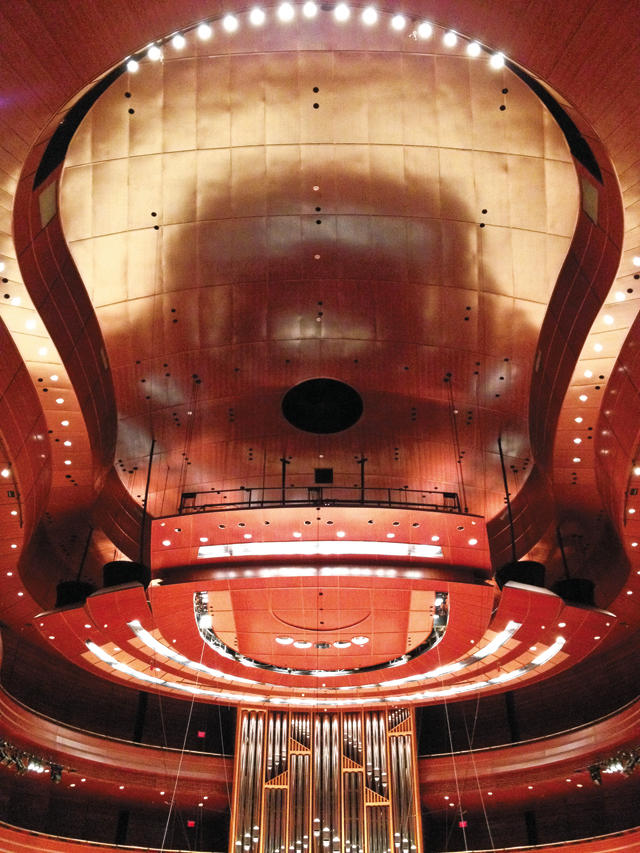 Instrumental design at the Kimmel Center. Photo by Andy Lien

Come Into Fashion: The Arts

Our hotel was a stylish haven in the middle of everything. The DoubleTree Hilton Philadelphia in the heart of Center City is on the Avenue of the Arts, what Broad Street has been dubbed. Adjacent to the Gayborhood, it is within walking distance to many clubs, restaurants, and a number of arts- and entertainment-centered venues. Across the street is The Academy of Music with its flickering gaslights of yore and the sleek and modern Kimmel Center for the Performing Arts that was fashioned to accommodate multiple performances in four unique spaces. From large touring Broadway shows to small performances like the preview of Lisa Lampinelli’s stupendous one woman-show that we saw as it was being workshopped for Broadway, the Kimmel Center’s events calendar is something you should check as you’re making your plans for your visit. Dine at IndeBlue Indian restaurant for pre-entertainment fare in luxe surroundings; I savored a sampling of different flavors of Roti as well as the spice of Bacon-Wrapped Bison Sheekh Kabobs before my pleasing entrée of Osso Bucco Pork Vindaloo.

Note: Be sure to look up while you’re in the Kimmel Center’s Verizon Hall, the first modern concert hall built in the 21st century, and note how it’s shaped and designed to look like a cello. So lovely. 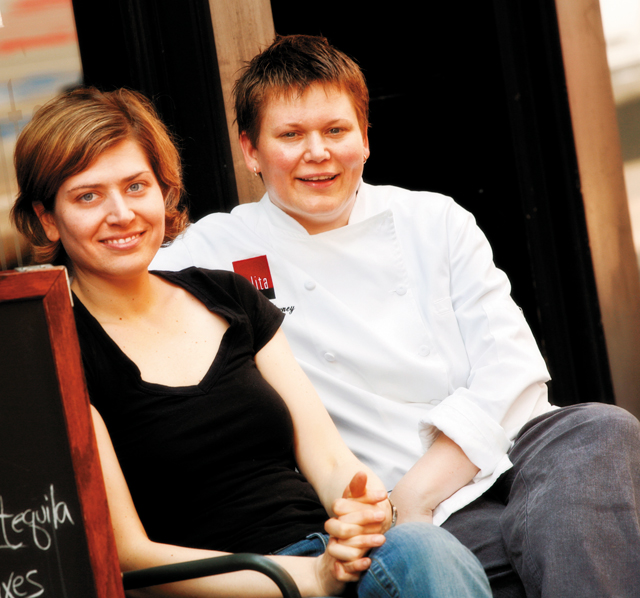 The team behind Little Nonna’s (and so much more) Valerie Safran (left) and Marcie Turney. Photo by G. Widman for Visit Philadelphia™

In a Timely Fashion: The Rights

“Get Your History Straight and Your Nightlife Gay” is the tagline for Philadelphia’s GLBT-oriented travel marketing campaign, which celebrated its 10-year anniversary in November of 2013. Now, as the state of Pennsylvania celebrates a brand-new uncontested overturn of a same-sex marriage ban, there’s new history being written. Coming from Minnesota and cities that are younger than Philadelphia, it is heartening to stand where our Constitution was written and realize that the rights for the GLBT community are finding a place there as well. Just across the street from Independence Hall is a sign that says GAY RIGHTS DEMONSTRATIONS July 4, 1965 – 1969 marking the protests that preceded even the Stonewall Riots in our nation’s history and helped begin the fight for civil rights. To stand there, between the Liberty Bell and Independence Hall, and realize the significance of events that happened there almost 50 years ago is a subtle, but worthwhile, experience. If you plan a trip to Philadelphia in 2015, check ahead of time for events commemorating this 50th anniversary.

The fact that the nine-block Gayborhood exists just four blocks away from City Hall makes it central and visible. Learning about the area from the locals, there is talk that it’s becoming less relevant as a geographical safe spot for the community due to social networking apps and the ability to be out anywhere, but there is still plenty of history to be found in the Gayborhood. Unfortunately, the groundbreaking GLBT bookstore, Giovanni’s Room, which was as much a social and activist organizing spot as a place to buy books, recently closed, ending an era. But, other locations of cultural and historical interest to the community are still open in the Gayborhood, such as the William Way LGBT Community Center which we toured when it was open during OutFest. 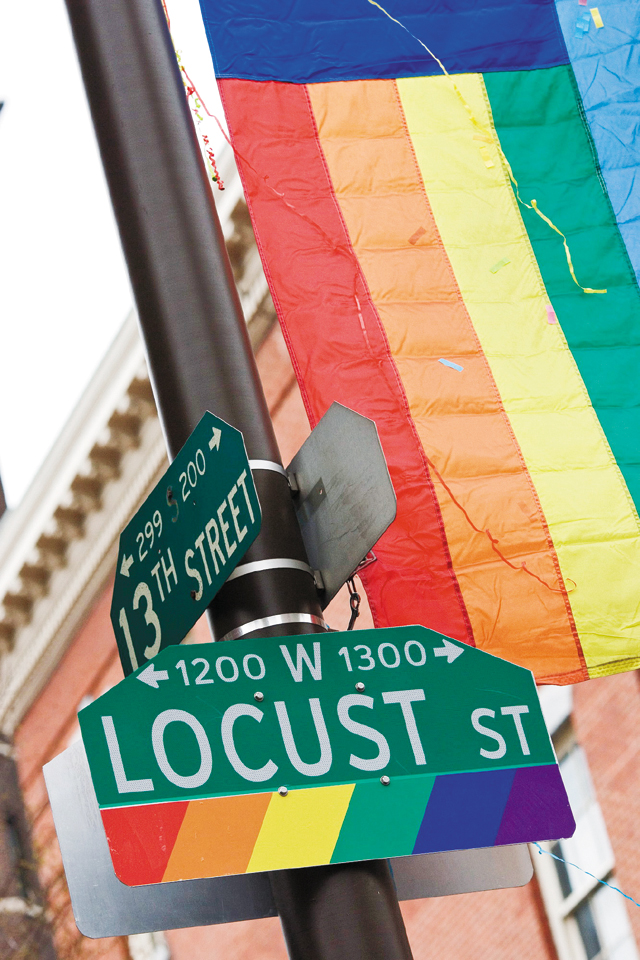 If you’re visiting on a weekend, start your day in the Gayborhood with brunch at Mixto. While sitting in the gently lit second story of the restaurant, I cradled a cup of strong coffee and my companions rallied with mimosas. Then, we proceeded to eat our way through Ecuador, Argentina, Colombia, Mexico, and Cuba (I had the Ecuadorian Breakfast of carne asada served with two eggs, sweet potato fries, white rice, and shredded lettuce topped with pico de gallo and tostones).

Or, for a fine dining experience at lunchtime (or any other time) in the Gayborhood, I highly recommend Little Nonna’s. Its owners, Valerie Safran and Marcie Turney, not only have a number of hotspots in the Gayborhood but were also 2014 James Beard Semifinalists for Outstanding Restaurateur. At this charming little gem of a restaurant, I enjoyed the Shaved Salad of fennel, celery root, radish, olive oil, lemon, parsley, and locatelli, and happily made way for the Spaghetti and Meatballs of beef, veal, and pork fontina-stuffed meatballs, with smoky meat marinara and parmesan. The ambiance is casual chic and even the washrooms delighted our lunch party. 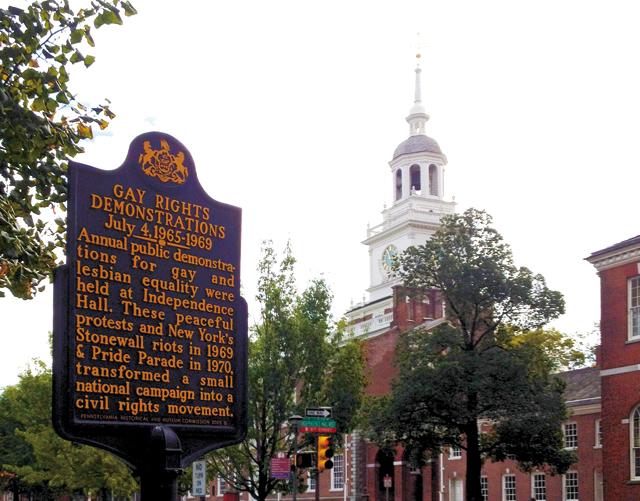 The presence of Gay Rights at Independence Hall. Photo by Andy Lien

Note: A handy map of the Gayborhood is available for download on www.visitphilly.com. Also on the website, you can study up on BYOB restaurants and find them using an interactive map…bring your own bottle and bring your own fun. 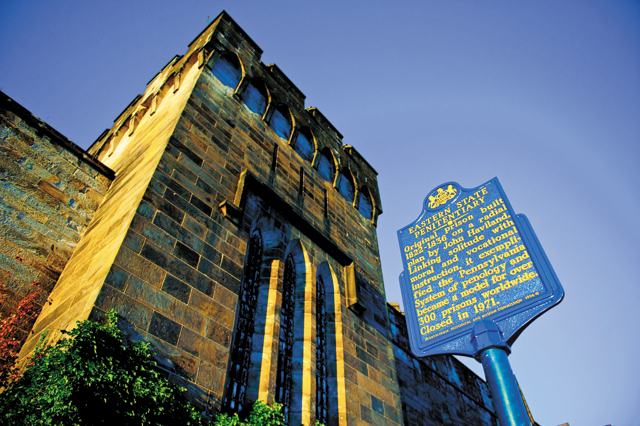 In Philadelphia, anywhere you go, you’re walking in history. The trick is to find what particularly strikes your fancy, and experience Philly’s fashion of the old-fashioned. For instance, if you are even marginally interested in the intersection of history and the paranormal,  you may have seen the SyFy Network’s show, Ghost Hunters, that takes investigators to different historical locations across United States and around the world that are believed to be haunted. One of my favorite locations that they investigated early in the series (season 1, episode 5) is Eastern State Penitentiary located in the heart of  Philadelphia. One of the most famous prisons in the world, the massive penitentiary is open year-round for tours. We were lucky enough to tour it at night, during the Halloween season, on the Terror Behind the Walls tour. Considering the fact that I had already seen much of the penitentiary on television, I knew some of what to expect. What I wasn’t prepared for was how I would feel knowing exactly what the investigators found when they stayed the night in that historic, creepy, national treasure. If I had, perhaps I wouldn’t have had such a large supper before our visit as my stomach was in my throat for the rest of the night.

Prior to our adventure at Eastern State Penitentiary, we fortified ourselves with plenty of food and drink at Jack’s Firehouse, just across the street from the entrance of the dark stone edifice. More people are hardier than I am when it comes to being scared out of my mind, so I still recommend dining before dashing around the haunted grounds. In fact, do like I did and start with the Cherry Wood Smoked Beef Brisket with Caramelized Onion Slaw and the Spinach Salad with Anjou Pears, Feta & Champagne Vinaigrette, followed by the Roasted Chicken Breast with Bacon Mac & Cheese and Mushroom Sauce. That smoky Mac & Cheese is what kept me going through the night, I’m convinced.

Note: If you time it particularly right and get to Eastern State Penitentiary during the Halloween season, be sure to take the Terror Behind the Walls tour. It’s a highly interactive performance-based haunted house experience in one of the seemingly most haunted places in United States. Of course, that part’s debatable; you tell me your verdict after you take the tour. 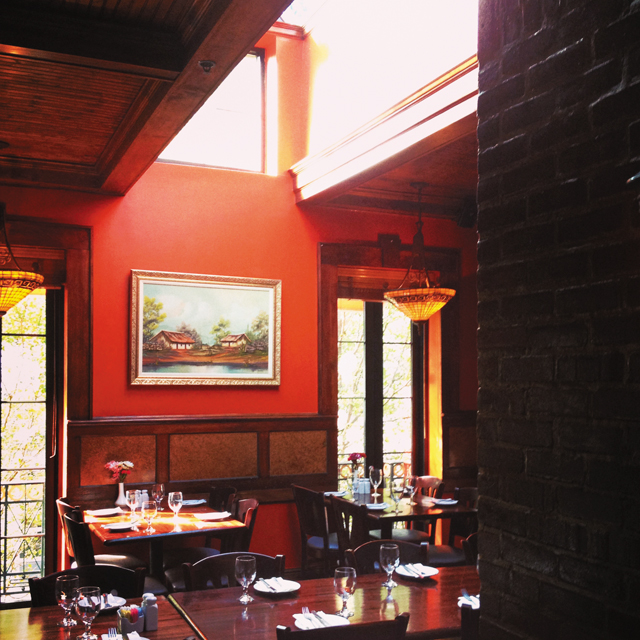 The Gayborhood makes planning your nightlife in Philly easy. After you’ve gotten in as much culture as you want to absorb in the evening, go out for a night at the bars. Easily within walking distance of each other, the only challenge is stumbling along the cobblestone sidewalks and streets…which is hard enough to do without imbibing (clearly I need to not use my smartphone while in historic cities with uneven walking surfaces). Our party of travelers tasted most of the clubs, including iCandy, Woody’s, Tabu, and Voyeur, but I took a shine to the U Bar and Tavern on Camac, as lower-key places to gather, gab, and get a little dancing in.

Each night, when my partying compadres decided to soldier on into the night and past my bedtime, I would wander back to the DoubleTree on a well-lit and seemingly safe stroll. If you decide to also stay at the DoubleTree and take no other advice of mine than this, make sure you stop for a slice of pizza on your way back to the hotel at Mama Angelina’s Pizza on Locust Street that is open into the wee hours of the night. It’s across the street from your bed and seems to beckon for you to stop by. You can walk in and blink in the bright commercial lighting as you focus on countertops of thin-crust pizzas with pieces the size of your head, just waiting to go home with you to your hotel room after a questionably good-but-bad judgment call. Just do it. You’ll be happy you did.

Note: Whether you fashion your trip to Philadelphia to check out the history, the arts, the food, the gay scene, or something I haven’t even mentioned, you can get all of the resources you need from Visit Philadelphia at www.visitphilly.com.