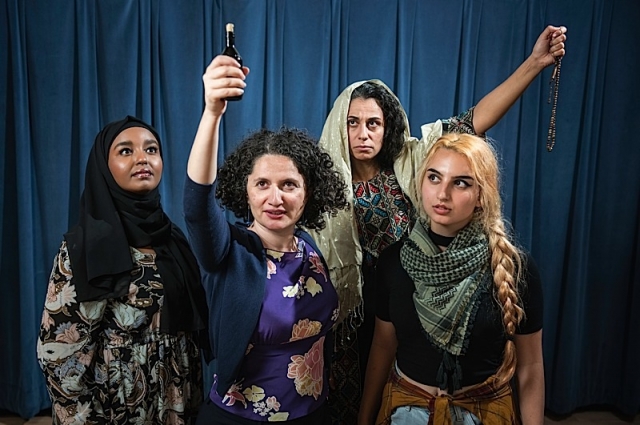 The fear of mass incarceration of immigrants animates Zafira and the Resistance, now running as part of the Guthrie’s Level 9 series at the facility’s Dowling Studio. The New Arab-American Theater Works company has assembled a talented cast to tell a dystopian tale. Playwright Kathryn Haddad imagines a tyrannical state where an America First mentality has manifested a figure akin to Big Brother in George Orwell’s 1984.
A giant screen image of that personality cult figure, named “Great Leader”, played with smooth menace by actor Garry Geikken, recurs throughout as a tool for indoctrinating high school students into a jingoistic patriotism reminiscent of what Sinclair Lewis writes of in It Can’t Happen Here. Jordan Lee Thompson’s video projections are definitely imposing.
To be clear, the resistance of the Zafira play does not equate with today’s progressive movement, the 2017 Women’s March, or antifa—all of which have been associated with the word ‘resistance’. In Haddad’s context, the ‘resistance’ stems from primarily white native-born Americans who resist multicultural concepts. 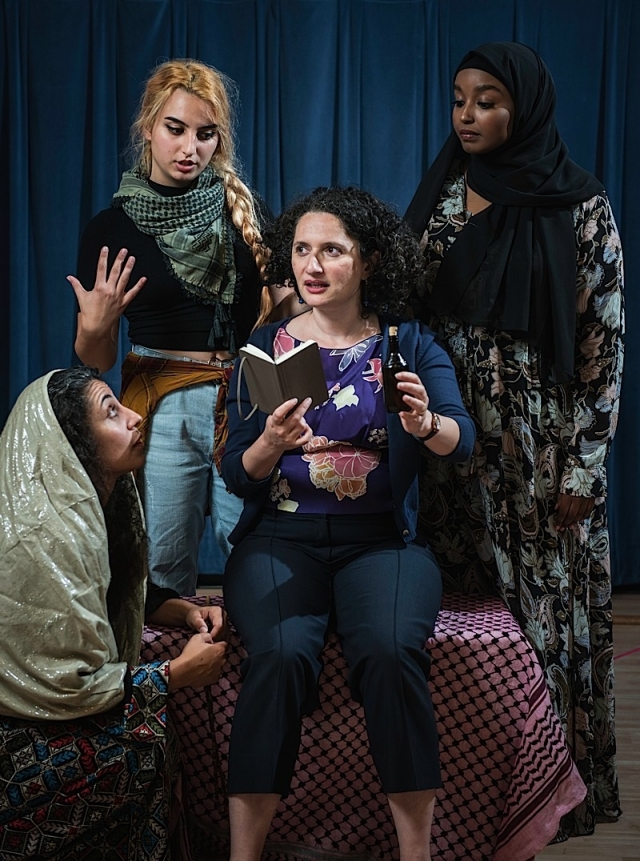 A passionate Lina Jamoul plays Zafira, the protagonist literature instructor whose globalist teaching approach stresses problems of oppression, social marginalization, and injustice. This puts her at fierce odds with school administration and faculty. Jamoul expertly embodies a person walking on eggshells in order to not upset the status quo, while resenting it every step of the way.
Throughout the play, Zafira makes references to olive oil as a healing fluid for the born and the unborn and its connection to her Lebanese roots. She extols empathy as a vital value in how we live our lives. It is interesting to think that perhaps the two most high profile Lebanese-American women today—Brigitte Gabriel and Jeannine Pirro—hold views that run strikingly counter to Zafira’s. This speaks well of the Lebanese-American community’s openness to a diversity of opinions.
Co-directors Malek Najjar and Zeina Salame get mileage out of the play’s polemical overview. The style is reminiscent of the “White Town” characters of James Baldwin’s Blues for Mr. Charlie. Overstatement is employed to drive home a point, at times to the point of caricature. Outlandish humor comes out of that. Eva Gemlo as Jamie, a fanatical student informer, is over-the-top hilarious as a racist villainess we love to hate.
Though not humorous, but every bit as effective, is an icy Heidi Berg as the authoritarian principal who enforces suffocating teaching standards with a psychologically incisive edge. Think Angela Lansbury in The Manchurian Candidate.
Despite the play’s ideological heavy handedness, the co-directors have led the actors to elicit vivid moments of emotional truth. When Jamoul and Berg clash over ideological differences, they are absolutely compelling. Stephanie Ruas as a student and Clay Man Soo as a maintenance man bring a sense of humanity and urgency as secrets of the school facility’s shadowy holding ward emerges. Both are non-Caucasian characters.
William Maus as Marcus, a student going through Kool-Aid (i.e. indoctrination) withdrawal, is touching in his dawning realization of the illusion he has been living under. It resonates of Alec Guinness’s epiphany at the end of The Bridge on the River Kwai. 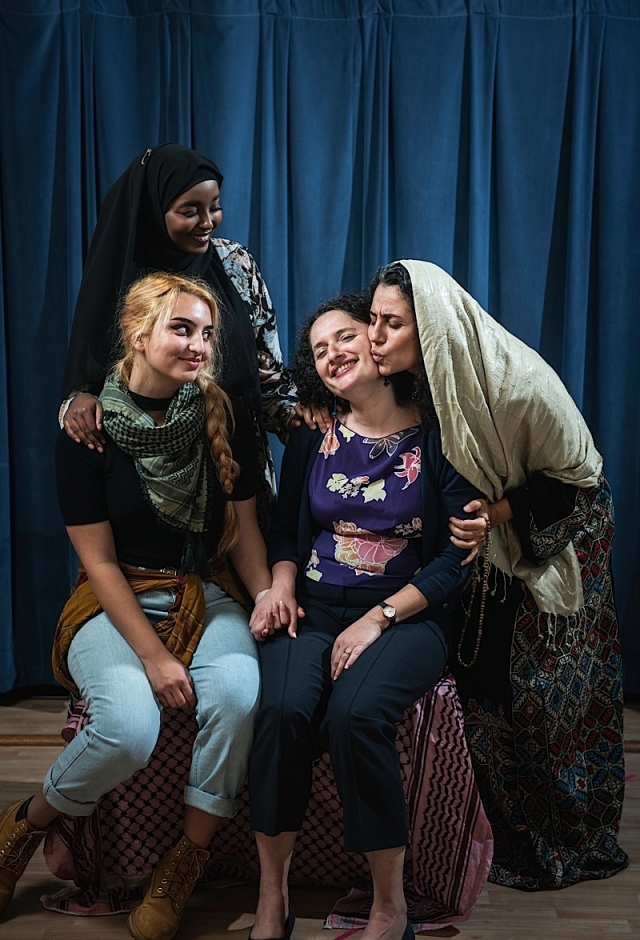 Zafira and the Resistance admirably informs the audience of sweeping stereotypes that have power to distort how people see Arab-Americans: belly dancing and terrorism. When a whole people can be reduced to simplistic images, this can leave them open to bigoted propaganda. Haddad also vividly portrays the power of a youth culture promoted by a manipulative power structure. Script and staging astutely convey how an ideology can be imprinted on young impressionable minds—the idea of the tabula rasa which insidious powers can exploit and cultivate from.
However, Haddad could go deeper inside the heads of those who uphold that structure beyond the hyperbole. The xenophobia the play is concerned about needs further excavation, and this possibly owes to our time of The Hunger Games, The Giver, Divergent, Maze Runner and other mass-consumed dystopian literature and film has saturated the market. Thankfully, there’s a rich body of literature from the not too distant past to stimulate deeper, if not more muscular, thinking in this realm.

Orwell’s Animal Farm and 1984, Ayn Rand’s Anthem and We the Living,  Pullman’s His Dark Materials, Solzhenitzyn’s various works, and Zamyatin’s We, all of which still saliently and hauntingly caution against tyrannical state overreach. Contemporary cult history has also been eloquently written about by Daniel Flynn, Jean Seberg, Win McCormack, David Horowitz, and Mallory Millett.

That said, there is some attention to 20th century history which Haddad nods to. Zafira and the Resistance contains allusions that compare the play’s containment abuse to the Japanese internment camps set up by Franklin Roosevelt’s administration during World War II and finally apologized for by President Reagan. The same administration also oversaw the Tuskegee experiment which continued through U.S. administrations of both parties right through to President Nixon. President Clinton formally apologized for that disgrace 25 years later.
Zafira and the Resistance also could let us inside what makes the Great Leader’s totalitarian vision work. What is his (or his backers’) endgame? Though her expression of politically-driven abuses and vocabulary is dramatically strong, the playwright could penetrate the human psychology of a totalitarianism that uses children so shamelessly. Just who is this Great Leader? Is he a figurehead? Or is he a cool-as-a-cucumber mad scientist? Or whatever.
Though the play’s focus on immigrant-based racism will certainly satisfy a particular audience, Zafira and the Resistance has elements that will also satisfy across the political spectrum. The play’s call to make due process a standard process and for the accused to see their accuser face to face, rather than having it leaked from behind closed doors, are two serious issues that have been front and center over the past few years. Haddad is clearly a playwright whose observations tap into the zeitgeist of the present day.
Zafira and the Resistance
Through Oct. 27
Guthrie Theater’s Dowling Studio, 818 S. 2nd St., Minneapolis
612-377-2224
www.guthrietheater.org