From Paris to Prague along German Rivers 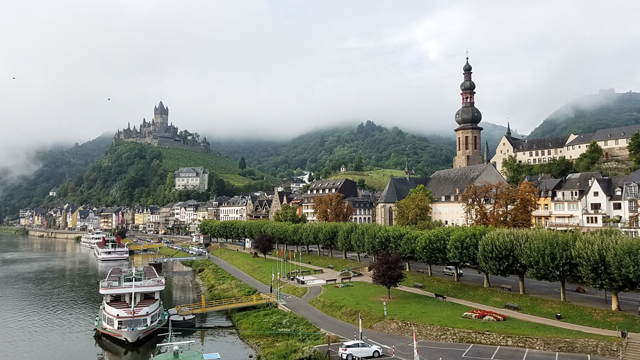 The swans were late for work. They’d been floating past our cabin’s balcony every day since boarding Viking Cruise’s riverboat Alsvin as we made our scenic way through Germany. We were sailing along the Mosel, Rhine and Main Rivers, bookended by land excursions in Europe’s hottest destinations, Paris and Prague.

So let me ask you: is that the trip of a lifetime, or not? I’m treated onboard like the goddess I was surely meant to be, starting with the morning service to my spacious, window-walled stateroom, so swift that, returning from the belt-busting breakfasts—Benedicts, omelets, smoked salmon—my room was camera-ready, with my tossed socks meticulously folded and a bookmark inserted in my paperback (which there was no incentive to open, anyway, because the passing scenery gave us front seats in a travelogue that beat any bodice-ripper). 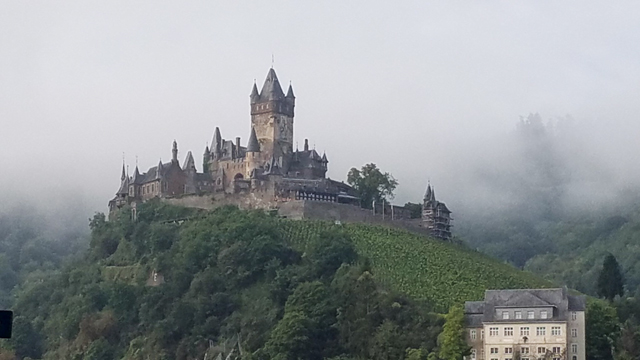 Perks included premier products in the bathroom, where my toes met heated floors, to movies on demand upon the intimate, 280-passenger ship, complete with chaises on the sundeck and meals worthy of Michelin stars—not to mention complimentary wine and beer while dining and evening entertainment. It’s totally tempting to remain onboard 24/7, but not with those picturesque, historic towns ready to welcome us via daily free walking excursions led by local experts.

First port of call: Trier, Germany’s oldest city—inhabited by Celts long before Augustus’ Roman troops marched in to create a “second Rome.” But it was Emperor Diocletian who erected those lavish building projects in his own honor. Many remain, including Porta Nigra, a formidable gate in the city’s four-mile wall, along with thermal baths, a huge amphitheater (lions vs. Christians) and behemoth basilica, all open to visit—as is the nearby Liebfrauenkirch of 1235, laying claims as the oldest Gothic church in Germany. 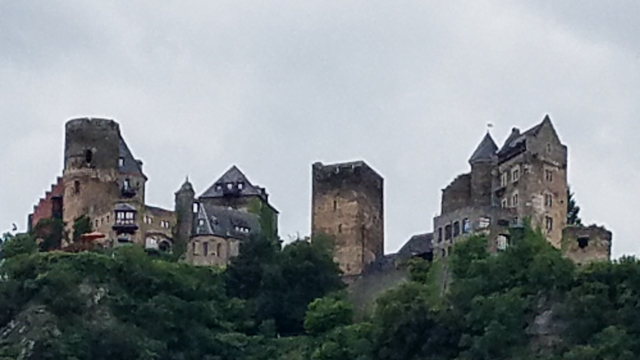 Trier’s other famous son bashed everything Constantine adored: Karl Marx of The Communist Manifesto fame. Ironically, his birth home is now the euro equivalent of a dollar store. Spy it en route to the vivacious Market Square, bounded by glamorous half-timbered houses and gate to the former Jewish ghetto.

Next, on to photo-ready Bernkastel, through the first of scores of river locks (cameras out, eyes peeled), past the initial thousand-or-so vineyards we’ll spot, climbing like green corn rows up the scalps of near-vertical hillsides.

Timing is everything. We arrived at the height of the town’s annual wine festival, in the throes of a boisterous parade of costumed revelers and tootling oompah band. The cobblestones spilled with seriously partying seniors, swaying with locked arms as they bellowed drinking songs. Even more wine stalls lined the riverbank, pouring excellent Riesling at two euros a brimful glass.

We awoke in Cochem the next morning as fog drifted across the façade of its majestic castle, left in ruin after Napoleon rampaged through town. Today it’s been restored to its Renaissance glory, where seven of its 50 rooms open to visit flaunt fireplaces paved in Delft tiles, walls with hidden passages, a hunting room hung with boar heads and antlers, and knights’ armor clanking. In Cochem’s cozy Town Square, we succumb to an indulgent pastry before browsing shops overhanging the cobbled streets. 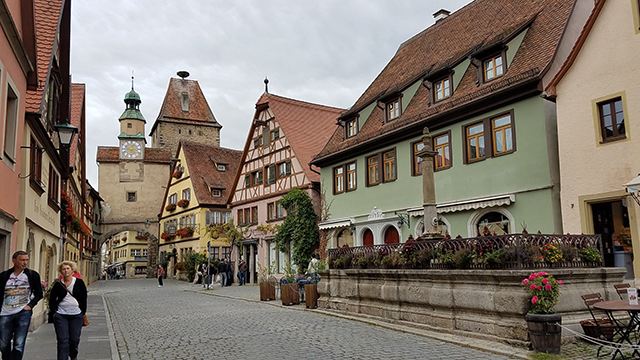 In Koblenz, the Mosel mingles with the mighty Rhine at Deutsches Eck (“German Corner”), presided over by a giant statue of Kaiser Wilhelm on his uber-horse. Graceful riverside promenades are shaded by the 12th-century Basilica of St. Kastor, gleaming with joyously painted spines spanning its chalk-white ceiling. The 12th-century Liebfraukirche anchors a pretty square that’s hub of tempting shopping streets.

Koblenz is the launching point of the legendary Middle Rhine—the rock star of the journey, studded with formidable Medieval fortress-castles and picturesque ruins that dominate hillsides at every bend. Lazing on the sundeck, we watch trains scooting along the riverbank and small towns ready for their close-up. Then, time for dinner: rack of lamb or halibut? Duck breast or pepper-seared salmon? Just say yes.

Today is another “oldest.” Heidelberg boasts the oldest university in Germany; some of its students joined us for lunch and conversation in the Hotel Ritter, a landmark since 1592. Skip dessert in favor of the local sweet called sneeball—snowball—which is anything but: layers of piecrust glued with chocolate.

Yet another castle dominates the skyline—this one looking like an out-of-control Home Depot project. Past its moat, filled with wild animals to eat or be eaten by, stands this home of 17-year-old royal newlyweds Friedrich and Elizabeth. Hubby built his bride a romantic gateway, rose garden, and aviary. Add-ons over the decades include a library, ladies’ quarters, and guard rooms, churning from Gothic to Renaissance to Baroque until felled by fire, which left only these photo-ready ruins. 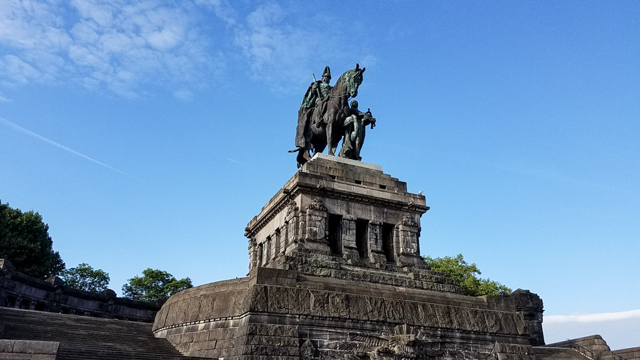 The town’s main street is an expanse of mug-and-T-shirt shops, motivating us to scurry back to the boat to dine, this time, on truffled cassoulet, mesclun and fresh fig salad, and pork tenderloin, girding us for the next day’s excursion along the Romantic Road (unromantically closed for construction) to decidedly romantic Rothenberg: Germany’s best-preserved medieval village and intact city wall, which the brave may climb to peer onto tiled roofs, church spires, and blooming gardens.

St. Jakob’s Church is home to an elaborately carved wooden altar and stony saints pacing its exterior. A former monastery enfolds the Museum of Crime and Torture—spiked chairs, Iron Maidens, shaming masks, chastity belts—utilized to induce a confession rather than as punishment. We paused for lunch at Glock on classic fare: potato soup, bratwurst with sauerkraut, apple strudel—before heading to Wurzburg to visit the prince-bishop’s residential extravaganza, which puts Versailles to shame. He hired Italian bold-name painter Tiepolo for the frescoes above the grand staircase leading to the voluptuous White Hall, Imperial Hall, and sumptuous chapel anchoring the Baroque garden. 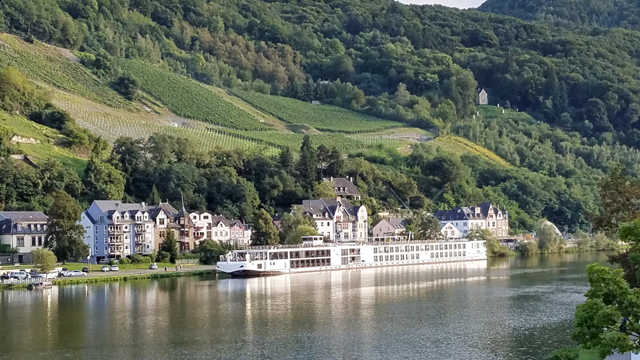 Nurnberg’s next, site of the infamous Nazi Party Rally grounds of 1935, with its pulpit for Hitler’s rants and pillars flaunting swastika flags. Then the Palace of Justice, where war crimes were tried. Finally. Bamberg, a medieval city honored by UNESCO as a World Heritage site, where we bid goodbye to our boat.

Its Town Hall, sporting murals like medieval billboards, is planted smack in the middle of the river, whose bridge leads to a worth-the-climb Cathedral, housing the tomb of Henry II and the famed Bamberg Rider statue (Horse in a church? Only here). Aside it hover the half-timbered houses prized as a movie set for The Three Musketeers. A rose garden overlooks Bamberg’s generous supply of breweries, where its special rauch bier (smoked beer) reigns. It’s admittedly an acquired taste (which I was quick to acquire). 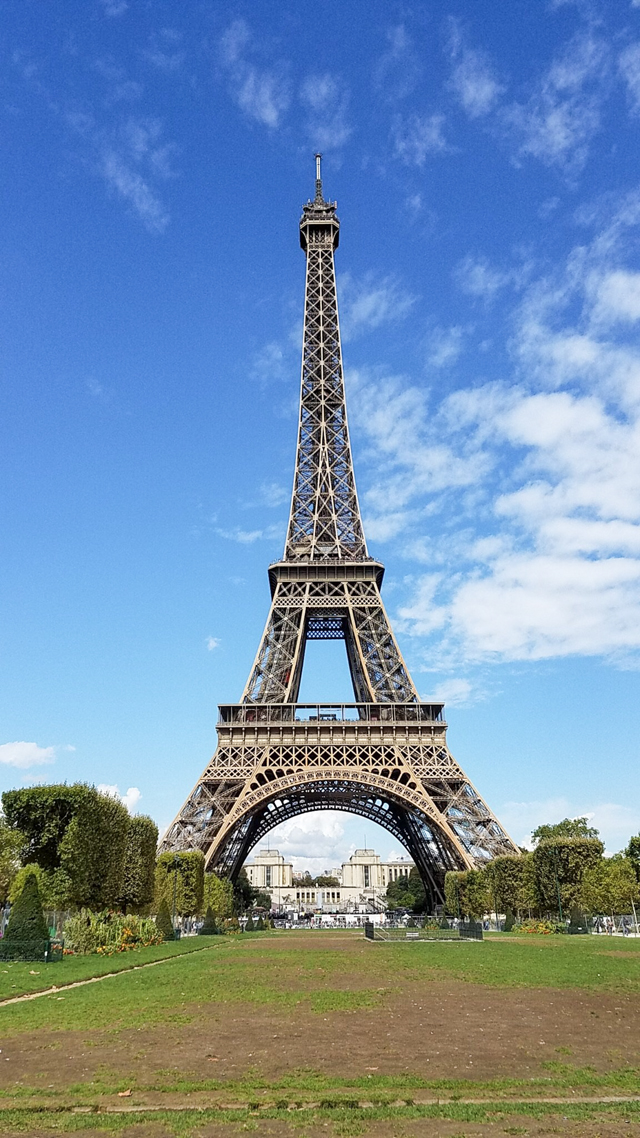 The trip began in Paris, including a bus tour of that luminous city’s fabled highlights, then plentiful free time to explore—for me, the Marais, boho Latin Quarter, a couple of museums, dinners of beef tartare—before boarding a coach heading to Luxembourg, and a peek into advanced civilization employed at a Burger King comfort stop, where we found bottles of bubbly Taittinger and Veuve Cliquot on its shelves. (Fries with that?) Luxembourg’s genteel capital invokes primo people-watching from the town square, fringed with outdoor cafes.

Our journey ended in vivacious Prague with another tour—fabled castle and Charles Bridge to the lively town square’s clock tower and another duck dinner diviine. To join the fun, visit www.vikingrivercruises.com .