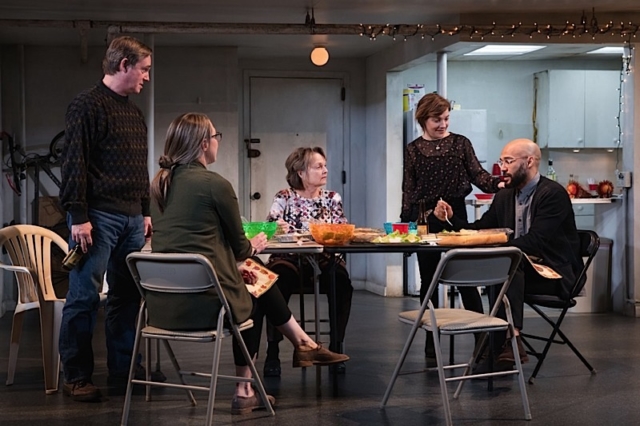 Pamela Reed and Richard Thomas are most widely known for their television performances in popular series—Parks and Recreation, and The Waltons. However, Reed and Thomas are living legends of the American stage. Their legend lives on at the Orpheum in a play I will be so bold to predict will attain legendary status itself: The Humans by Stephen Karam, winner of the 2016 Tony for Best Play.

Reed and Thomas play Deirdre and Erik, two late middle-aged parents, still married, who travel from Pennsylvania to New York’s Chinatown to spend Thanksgiving with their daughter, Brigid (Daisy Eagan) and Richard (Luis Vega), her long-term live-in male partner. Also in attendance are Aimee (Therese Plaehn), their lesbian adult daughter and Fiona (Lauren Klein), Erik’s wheelchair-bound mother suffering from Alzheimer’s. The hosting couple lives in a Chinatown, not for reasons of ethnicity or cultural interest, but because of their constrained budget. Therein lies the crux of The Humans. It lives on stage as a quintessential reflection of the economic struggle of so many Americans over the past several years. 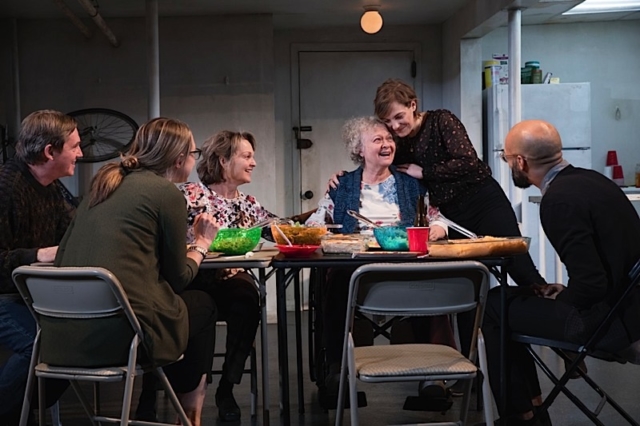 Like three other American stage milestones, Arthur Miller’s Death of a Salesman, Tennessee Williams’s A Streetcar Named Desire, and Lorraine Hansberry’s A Raisin in the Sun, the spectre of poverty seems to literally loom in the wings of the theater space.

We come to learn of particular daunting pressures the crusty but lovable older Blakes are living under. Thomas embodies profoundly the depression of a man living in fear of what’s next. Reed is deeply poignant as a woman who clings to her faith in order to somehow navigate what will be a very uncertain future. Eagan crackles as Brigid, who, like her parents, but in her own way, chafes against what Fate seems to have dealt her.

In contrast, the luminescent Vega’s Richard is a pleasing counterpoint to the Blakes’ tendency toward despair. Unlike them, he is not descended from European roots and has a more flexible view of inner life that likely comes out of his having to navigate cultural differences. To what degree might the Blakes’ overview be a byproduct of the family’s interpretation of their Irish Catholicism? That said, their faith still seems to have given them strength to endure.

Hence, the empathetic Karam is in no way out to skewer Christianity. He sees complexity in the realm of the spiritual. As with his Sons of the Prophet, wherein two gay brothers contend with family breakdowns, the playwright is thoughtful about Christian concerns. He understands that suffering is the human condition. The Humans’s lesbian representation, beautifully portrayed by Plaehn, peers into anxiety sprung from loneliness and chronic illness. It dovetails nicely with Klein’s touching rendition of Fiona.

Directed with scrupulous attention to human interaction and Karam’s numinous interests in dreams, the life of our sleeping dreams is threaded throughout The Humans to ultimately sublime effect. The ending, simply staged, with lighting by Justin Townsend (no relation to this reviewer), is mindblowing.