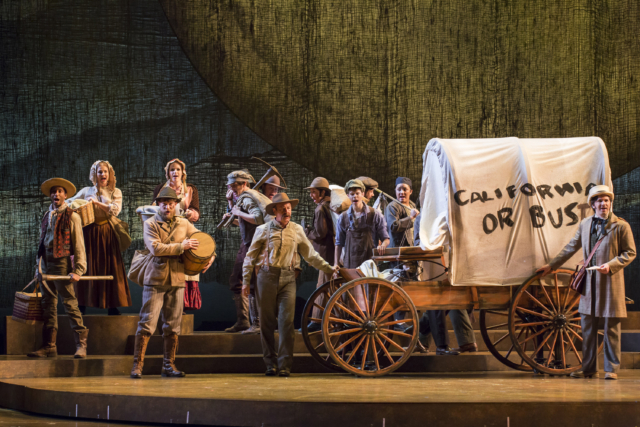 A sweeping saga of the West and the pursuit of the “American Dream,” the musical Paint Your Wagon tells the inspiring story of the rise and fall of a remote mining town during the height of the California Gold Rush. The new book for Paint Your Wagon, written by Pulitzer Prize-nominated writer Jon Marans, includes additional narratives from the era that were left out of the original version, making the story more inclusive of diverse histories, experiences, and identities.

Rhett George plays H. Ford, a free black man from New York who travels west to make his fortune. Not part of the cast when the show originally ran in Seattle in June, George stepped into the role for the run at the Ordway.

Paint Your Wagon is being hailed as a “revisal” with alterations from the original to more accurately reflect the true diversity of gold rush communities during that era. Why are these kinds of “revisals” so prominent in recent years?
Rhett George: It’s always important to get a better understanding of history from all aspects, so why not do it in a revisal? There are stories that are not always told or are forgotten about, so when musicals are revived, it’s a great opportunity to tell a more accurate or complex story. Pertaining to Paint Your Wagon, it was adding more developed storylines and characters, entirely rewriting the script, and rearranging where the songs are placed and who they are sung by to make more sense with the story.

What makes this version so different from the original classic that so many people are familiar with?
RG: The musical first opened on Broadway at the Shubert Theatre in November 1951 and the West End in 1953. Just revisiting a classic that is more than 50 years old with a whole new generation of actors makes it different in itself. This version has an entirely new book and storyline. Also, one of my favorite songs in the show, “They Call the Wind Maria,” was an ensemble number in the original (if I am not mistaken) but is now a solo standout in act two sung by the character Ben Rumson (played by Robert Cuccioli).

You are in a unique position in that you only have a week of rehearsals with the rest of the cast before the show opens at the Ordway, while most of the cast has already performed together when the show ran in Seattle. What does that quick turnaround feel like as a performer?
RG: Actually, I only had 4 days of rehearsal to learn the show with the cast. It can definitely feel overwhelming and stressful learning a show in such a short time. As an actor, you want to have time to develop and find your character. You want to feel comfortable with the choreography and blocking, especially in such a big show as this. But actors jump into shows all the time, so you just have to be as focused as best you can and dive in. This cast was amazing to me and helped a lot. My vocal track was given to me before rehearsal so I went over it the best I could to make the vocal rehearsals more efficient. So although it was a whirlwind, it was also fun and exciting!

Your character, H. Ford, is a free black man from New York who travels west to make his fortune. This is a narrative that is often missing from gold rush stories. How are you approaching the role and what do you hope to bring to the character?
RG: When I read the book of this production, H.Ford clearly seemed to be a very wise and proud man of color. Although he was a free man, he was still fighting for change and equality, which is so important and relevant with the racial dialogue and tragedies that have taken place in our time today. I am approaching the character as a person with a strong and knowledgeable point of view; a man who is on a journey with big dreams, who will not stop fighting for change and equal rights and to end slavery and ignorance. He is always educating and uplifting others through his words. Although H. Ford is very witty, there is always an important agenda on his mind. I hope I bring all those elements to the character.

You’ve also written your own music and released a couple of CDs. Is that where we’ll see you heading, or will Broadway always be your passion and home?
RG: Yes, I have two albums which I wrote and produced myself called Something Better and The Music Will Save My Life. I have been singing since the age of three so music has always been a strong passion in my life. Of course, I would love to get my music out there to a wider audience and be known internationally as a musical artist. But Broadway goes hand in hand with that passion. There is nothing better than performing live on a big stage to a large audience and feeling that energy. Although I may venture out and fulfill my other passions and dreams, I will always come back to the place that gave me my confidence in the first place: the stage.

Paint Your Wagon runs at the Ordway Center for the Performing Arts through August 21. For more information and to purchase tickets, head to www.ordway.org.