OUT Twin Cities Film Festival: Teddy-Winning* Documentary at OUT TC Film Fest is a Harrowing View of Homophobia in Today’s Uganda 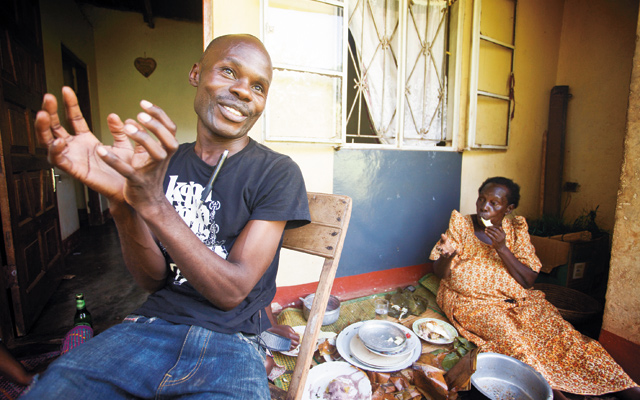 Call Me Kuchu is perhaps the most harrowing documentary ever made about GLBT experience. Filmmakers Malika Zouhall-Worrall and Katherine Fairfax Wright delve right into the homophobic hysteria that has swept Uganda in recent years in which powerful efforts to criminalize homosexuality and lesbianism with the death penalty has enjoyed popular support and grandstanding political sponsorship. We get up close to tabloid editor Giles Mahame who has led the charge by outing numerous gays and lesbians. His frequent little giggles reveal a sadistically ambitious personality. His investigative journalists infiltrate gay clubs and circles posing as gay people. He says plainly that his employees “ignore the right of privacy in the interest of the public.” Bear in mind, that outing in Uganda means eviction, ostracism, brutal beating, and being on the run. Mahame, Uganda’s Family Life Network, most politicians, and various white American evangelical demagogues like Lou Engle, shown in the film, have created a toxically superstitious zeitgeist where it is believed that gays recruit people to join their ranks, that youth are being forced and lured into homosexuality, and that a homosexual agenda threatens to sweep the Uganda educational system in the same way Engle says it has swept the American educational system.

The so-called “Kill the Gays” bill is continually put on the docket of Ugandan legislators: life imprisonment and death for aggravated homosexuality, prison time for repeat offenders, aiding and abetting the gay and lesbian community, and not reporting any homosexual person you know within 24 hours. The penal code calls homosexuality “unnatural behavior against the order of nature,” mimicking Britain’s old draconian colonialist code, long rescinded, “carnal knowledge against the order of nature.” Since the Bible says the wages of sin are death, then execution is justified.

“Kuchu” means queer and some Ugandan GLBT people have embraced the term. In an interview with a courageous young lesbian, we hear of how as a teen she was “correctively raped” by an older man to make her straight. She ended up with a stillborn child and the HIV virus. Double stigma. There are marvelous interviews with lesbian activist Naomi Ruzindana and with straight ally Bishop Christopher Senyonjo, beloved for his safe havens for GLBT folks. Give this man the Nobel Prize! There are also horrific rally sequences where shouts and chanting reminiscent of pentecostal channeling call for an end to homosexuality. Moreover, we see that queerness is associated with specific Muslim terrorist acts. Thank you to OUT Twin Cities Film Festival and its director Chris Durant for screening this towering documentary.

*FYI: The Teddy Award at the esteemed Berlin International Film Festival is broadly considered to me the most esteemed award in the world for GLBT-oriented filmmaking.

Note: In late 2011 Lavender ran the Uganda: An Overview series. Read it again at lavendermagazi.wpengine.com.