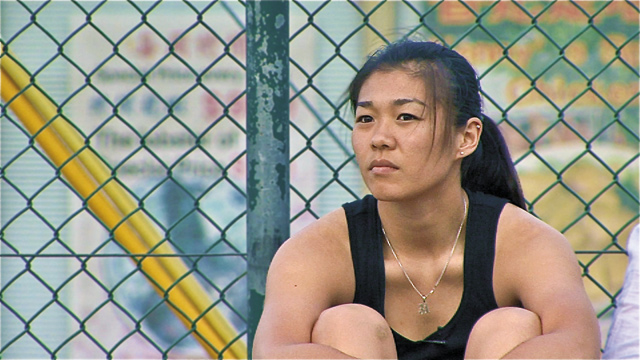 No Look Pass is an absorbing new documentary about Emily Tay. It shows the intersection of her traditionalist Burmese parents, her time on Harvard’s women’s basketball team and on a professional German team, women she has loved, and the anxiety around coming out as a lesbian.

I interviewed filmmaker Melissa Johnson about a film that surely had to have been handled with a delicate touch at times.

JT: I liked the way you combined the immigrant experience, the issue of marriage, lesbian identity, and dreaming for a bright future into No Look Pass. Is that how the film emerged as you made it or were these things you had in mind before you started shooting?

MJ: I had all these elements in mind but I set out with a pretty simply premise: follow an exceptionally talented young athlete through her senior year in college into her first year playing professionally.  I wanted to see how all the aspects of Emily’s complex identity intersect.  Basketball serves as the vehicle for her self-discovery.  I don’t think of it as a gay film, or a sports film, or an immigrant film per se–rather it’s a coming-of-age film.  A film about struggling (and ultimately succeeding) in living her version of the American Dream.  All of those elements serve as essential pillars.

JT: I got a sense that not everyone you were filming realized that Emily was a lesbian. Did you approach the shooting as simply a documentary about a basketball player?

MJ: I felt that I should follow Emily’s lead in terms of who knew that she was out and who did not. This was especially sensitive with her parents, who did not know at the time of filming. We told everyone who was participating that it was a story about Emily’s life.

JT: While filming the Vernheim section did you run into any resistance or hostility from the Germans?

MJ: Everyone in Germany was incredibly open and mellow about our filming–all of the individuals on the team as well as every venue we shot in.  Germany is much less litigious than the U.S., so getting releases signed was very easy.

JT: The sections with Angela were filmed before Don’t Ask, Don’t Tell was rescinded. What were your thoughts at the time about filming Angela’s sections? She was clearly up for it, but wasn’t it a risk?

MJ: It was a huge risk and I was very nervous about it.  Until two weeks before our world premiere at Outfest in Los Angeles we had Angela’s face blurred in the film.  At that time, Angela told me that she wanted the blur effect removed–she had had enough and was ready to assume whatever consequences would follow.  It was incredibly brave on her part and kept me up at night worrying.  Luckily, DADT was abolished before anything happened to Angela.

JT: I was moved by the sections with the family. The parents are very likable but Emily is honest about their hard discipline. Emily is also honest about how her older brother seemed to take a back seat to her while growing up. She also cries in deep gratitude in her parents’ presence for the sacrifices and extraordinary success their lives have been since leaving Burma.

MJ: I think Emily’s parents are amazing.  I don’t agree with what they wanted for their daughter, especially their expectations about love and marriage.  But there’s no doubt in my mind that they love Emily and her brother tremendously.  Emily goes on a journey throughout the course of the film; by the end, you’re right, she’s overcome with gratitude for the sacrifices they’ve made for Emily and her brother.  It’s interesting to see, too, that despite being the girl and the younger sibling, Emily took on the more “alpha” role compared to her brother.  She was thrown into the limelight because of her extraordinary basketball ability.

JT: One of the most touching scenes is when her father talks about when living in Burma, the only school he associated with the U.S. was Harvard, and that it was so awesome that his daughter was a student there.

MJ: I love this scene with Mr. Tay–he’s just so authentic.  I defy anyone to watch what he says here and not be moved.  Even my most macho friends get teared up at this part.