Out In The Food Trucks

Mobile cuisine has fast gone from trend to full-on movement. Gazing down over Marquette Avenue from the above skyway, it’s a beautiful sea of colorful trucks serving a vast variety of cuisines. It all began not long ago with the arrival of a trailer run by two accomplished chefs, who are partners in every sense of the word. As this summer heats up, we chatted with them, along with several other chefs and business owners, who are
out and proud on the city streets. 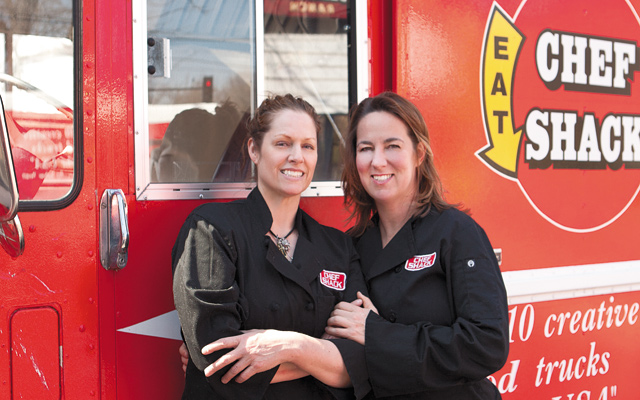 Carrie Summer and Lisa Carlson met at a job interview. Carlson was in need of a sous chef and they clicked instantly. As their relationship blossomed, they found a shared dream in running a mobile food business even as both of their culinary stars continued to shine at other critically lauded restaurants. What began with a small trailer they called the Chef Shack at the Mill City Farmer’s Market has become a fleet of trucks and two restaurants: one amongst the beautiful vistas in Bay City, Wisconsin, and the new Chef Shack Ranch in Minneapolis’ Seward neighborhood.

“We weren’t ready for a restaurant,” Summer said. “We were well-paid chefs for other people. Three years into the business, we still worked in other endeavors full time because the trucks are so seasonal.” What they did with their valuable off-time was travel, which is where they were inspired by the street food they found, like the exotic aromas of Indian spices or the comforting adobo of Indonesia. Their goal was to make delicious food more accessible and remove pretense from great dining.

While they were early, they may not have technically been the first truck on the scene. “I think our Ethiopian friends of the She Royal trucks might have actually filed the license first,” Summer corrected me. They have established themselves as leaders in the movement, even inviting potential food truck business owners to stage with them. Culinary dreamers have come from as far as New York City and California to see if they have the stomach for this challenging business. Not only are our trucks hampered by a ridiculously short season, but there are always bumps to avoid with a new business. “It’s all hands and elbows inside the truck.” Some of the useful tips are simple, like making sure you have a full propane or gas tank, to more truck-specific tips like tying down your condiments before getting on the freeway or battening down your service window so it doesn’t get taken off while driving under a bridge.

In addition to balancing the demands of the business, the duo do what they can to make certain to leave work at the door when they are at home. “Travel helps,” said Summer. “It’s magical.” They also know their jobs. “At work, she’s Chef Carlson and I’m her sous. We all report to her. Someone has to be the boss.” Meanwhile, Summer handles the private bookings (all of their trucks are available for catering events) and marketing, like dealing with pesky food writers with the utmost grace. “It’s a challenging business in a challenging industry to be a woman, but we do this because we love it. We’re blessed to feed people.” 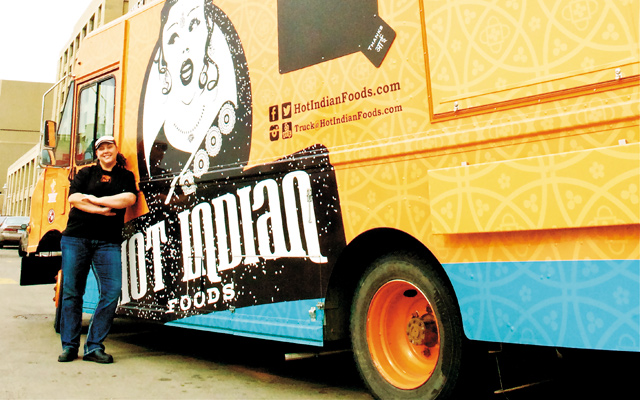 One of the newer trucks is the tangerine colored Hot Indian Food Truck where Chef Janene Holig serves up Indoritos or their Charlie Award-winning fries spiced with a heady mix of aromatics, herbs, and spices. “Seasonings are meant to be intensified in the cooking process,” she told me. She was lured into the truck by the passion of truck owner Amol Dixit and the promise of the open road. She thrives on the challenge and spontaneity of the business that has them rolling through all sorts of locations from downtown Minneapolis and now into their new stall inside the Midtown Global Market.

Hot Indian will be taking over the former Left Handed Cook space and is looking to open any day now. This will cap a busy year for Holig who is just settling into married life, which she swears was only coincidentally planned around food truck season. “My wife is extremely supportive and exciting. She made the complex timing of both pretty easy for me.”

Since their debut on the streets Hot Indian has been drawing crowds, praise, and fans. Pinning down the best moment inside the truck, though, is hard to say. “Opening night at Harriet Brewing, bouncing the truck all the way across Loring Park for PRIDE Beer Dabbler, serving outside City Hall for the Freedom to Marry first weddings, betting the ponies at Canterbury, crashing Vikings training camp, attending the Charlie’s, but the best was the Bollywood flash mob that ‘mysteriously’ appeared behind our truck on Nicollet Mall for India’s Independence Day!” It’s been a whirlwind year. 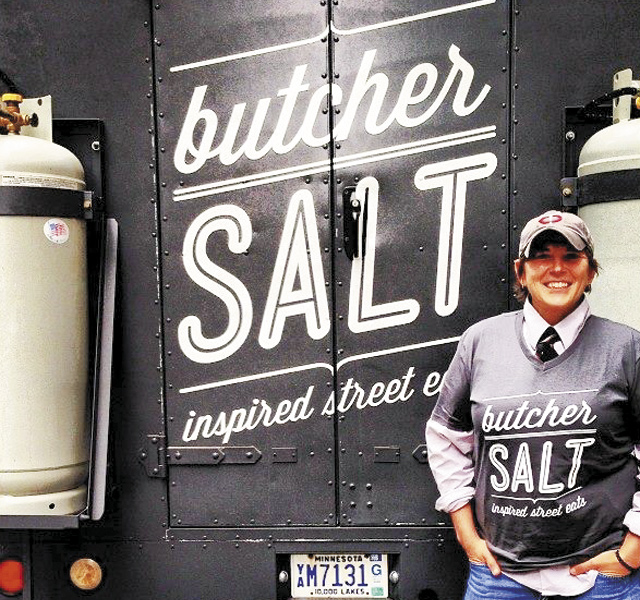 This season is only just beginning and the newest truck on the scene is the flat black and white lettered Butcher Salt run by Jean Hutar. She was successfully overseeing several Chipotle restaurants when she decided to make the move to independent, mobile business. She was inspired by Hola Arepa to make the move: their incredible food and infectious enthusiasm got her creative wheels turning. With the love and support of her partner Shari, she found a truck and got to work. Her truck serves several sandwiches and sliders, their specialty. “We’re both workaholics,” said Hutar. “We love what we do and when we get home at night we can’t wait to share it with each other.”

An ambitious soul, she’s not the sort of person to stand by the sidelines, but wants to jump in, lead, and create; but the biggest lesson she’s faced so far this year is learning to trust those around her. “I can’t do it all,” she said. What has surprised her most about the business is the amount of love she’s received from the other trucks. “Even though we’re direct competition, they’ve helped me figure out licensing, parking, permits.” 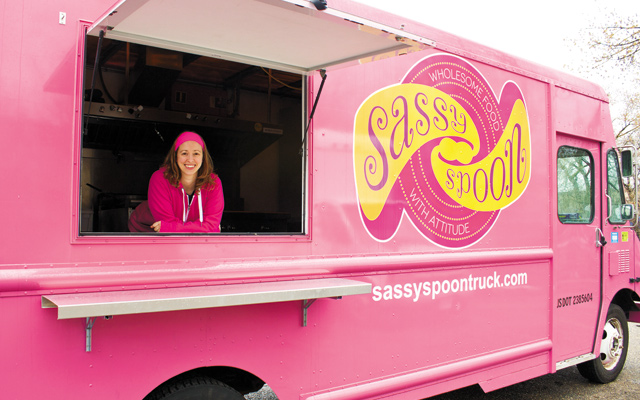 Sassy Spoon’s Tamara Brown is a big supporter of community, as a business owner and a chef. Her truck serves gluten-free dishes made with locally sourced ingredients. She’s committed to whole food (in fact, we shop at the same co-op) all year round, even when she’s not on the truck. Her holistic nutrition training and an independent spirit led her to want to open her own business. The truck was a perfect entry into feeding people the food she’s so passionate about. (Plus, those nutrient-dense vegetables and ethically raised meats are awfully tasty). “This is one crazy business! I have never experienced as much stress or anxiety as I have running this business. Food trucking is really hard work! The irony of the situation is whether my ‘healthy’ truck is actually creating ‘less health’ for my own body.  On the other hand, I’ve become friends with some wonderful people in the truck world who provide amazing support, advice, and help.” 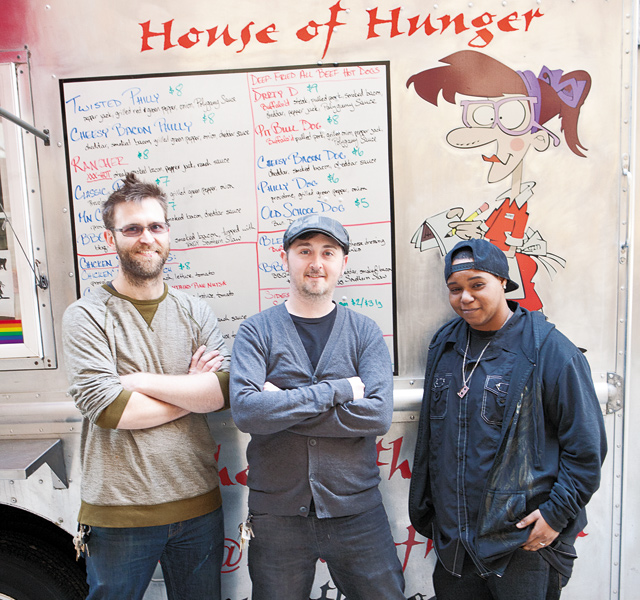 The theme of the support in the industry runs through to Wesley Kaake of House of Hunger who said he was surprised by the camaraderie and support of the other trucks. Although, they took a different path to food truck ownership, “ We originally wanted to open a doughnut shop downtown Minneapolis next to CVS in Skyscape. By the time the financing fell through I had spent 9 months working on it, quit my job, cashed out my stock and 401(k), and needed to do something fast. The city of Minneapolis kept mentioning food trucks to us when we would visit them while working on the doughnut shop and it didn’t sink in until we knew the shop wasn’t happening at that time.” Now fans know they can count on Kaake and his team for hearty fare like deep-fried hot dogs, Philly cheesesteaks, and burgers. When the truck isn’t out on the Minneapolis streets, they still manage to operate all year round with catering and events. Whenever they do have time, Kaake said they do fundraising for several nonprofits, although those that work with the GLBT community are closest to his heart.

That is a part of what makes these trucks so awesome. It’s not just seeing their bright colors and smelling the tantalizing dishes, it’s the community they foster with each other and us, their eaters. If that isn’t a beautiful dose of summer sunshine for the soul, I don’t know what is.