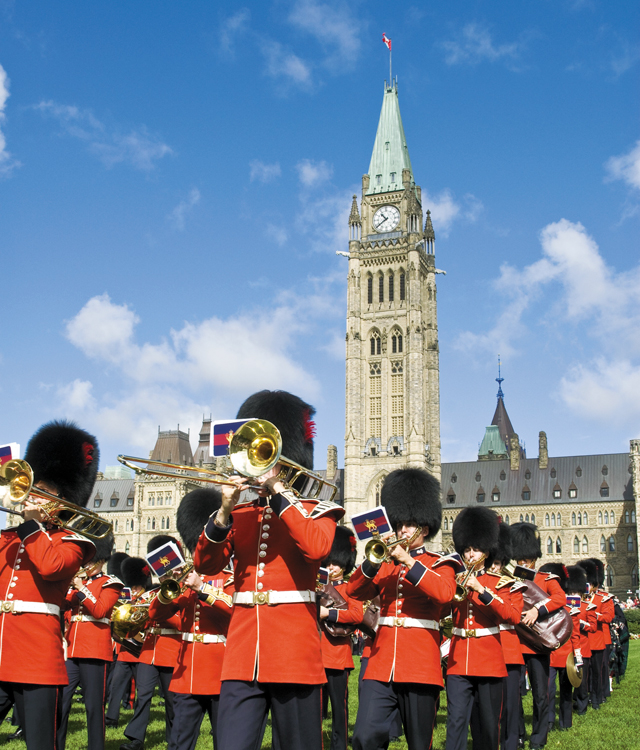 Ottawa tries harder. Although it’s the capitol of Canada, it’s number four in size (and image), trailing cosmo Montreal, Vancouver’s laid-back lotus eaters, and Toronto’s MBAs making good. The Ottawa River separates the nation’s seat from Quebec across the bridge, located here to bridge the divide between the country’s French and English citizens and also—following the War of 1812—to distance itself from the U. S. border “so invading soldiers would get lost along the way,” deadpanned Julianne while guiding visitors through Parliament.

Folks are friendly here—downright chatty—serving as unofficial ambassadors of goodwill, from taxi drivers (“Try the bagels at Kettleman’s; they’re the best!”) to café servers (“Like us to put together a sampler plate?”), to vendors, who leapt from their emporiums to guide this befuddled visitor. And at the Lord Elgin Hotel, I was treated like QE II herself.

They’re reconciled—they even joke—about their image as our country-bumpkin neighbors, but think about it: They’re bilingual, not we; they’ve legalized gay marriage; they’ve abolished those annoying pennies. No loud muzak invades shops and restaurants. They don’t cross empty streets against the light: even that’s an indication of good manners. 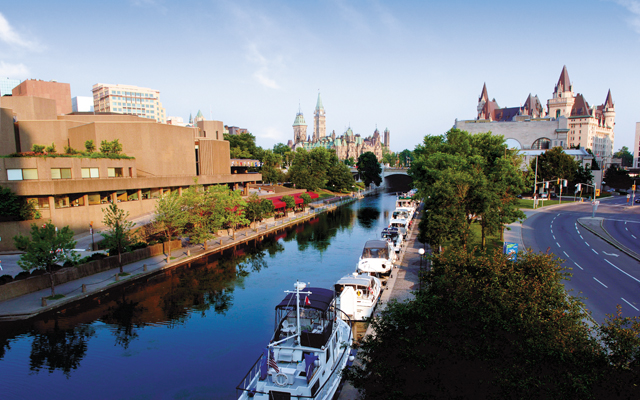 Let’s get started back at Parliament, the city’s landmark edifice, looking more cozy than imposing beneath its patina’d copper roof. Bordering the city’s iconic Rideau Canal, it’s surrounded by greensward dotted with statues, from Queen Elizabeth II astride her horse to the Women are Persons ladies leading the 1929 push to allow femmes to serve in government, too. Julianne leads us to the House of Commons, where the government party sits across the aisle from the opposition, and where, aside the Canada Doors, the Prime Minister holds news conferences (past PMs, immortalized as gargoyles, scowl at each other above it). We ogle the ornate high-Victorian Library of 1876, sole survivor of the 1916 fire that destroyed the rest of the building—a beacon of erudition back then, when (says Julianne) “culture was represented by pig races.” We ascend to the Peace Tower for a 360 view of the city as its clock bongs out the hour. P.S.: Guerilla yoga classes are held on the lawn Wednesday at noon in summer.

I pause next at neighboring Chateau Laurier Hotel (aka The Castle)—more evidence that the pig races have been deposed in favor of pursuits like high tea, all crisp linen-cum-tea sommelier plus a three-tiered tray of ultra-Canadian treats, including strawberries in ice wine, maple pastries, and blueberry scones.

Then I wend my way through the bustling Byward Market, an enclave cascading from posh boutiques along Sussex Street like Trustfund (“a lifestyle is a terrible thing to waste”) to specialty shops and pubs galore, all centered by the food market itself and a stall selling iconic beavertail pastries—fried dough liberally loaded with cinnamon and sugar, with a slice of lemon to stop your teeth from aching.

It’s here I join C’est Bon’s Chocolate Tour, munching elite truffles at Stubbe, sipping from chocolate-scented leaves at Tea Shop, inhaling heaven at Cupcake Lounge and a jolt of chocolate balsamic at Bottega Nirastro, then ending at Play, a buzzy restaurant where chocolate pâté is elevated via Grand Marnier crème anglaise, pistachios, and candied orange. It’s sooo good that I return for dinner—a glutton’s tour of small plates and genius wine pairings, ranging from arctic char on tomato-scented couscous with collards to scallops paired with Brussels sprouts and a pour of Chenin Blanc, then pork belly aligned with star anise, beets and collards, and beef tartare with sriracha aioli and a splash of Riesling. 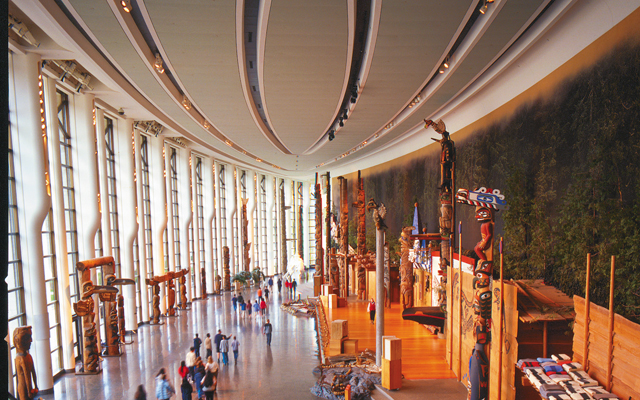 I’m back in Byward the next night at Murray Street, a meat-centric temple where pig portraits double as saints’ images and charcuterie plates come loaded with pâtés, terrines, and sides of pickled everything, from beets and cornichons to milkweed pods.

From mega-meat to none: Zen Kitchen is humming with feasting trendsters who couldn’t care less that it’s vegan—they’re simply here for the exciting eats which sizzle, from polenta fries with roasted garlic and basil aioli to gnocchi tossed with mushrooms, sweet peas, and almond pesto. Desserts are pure sin. Dave, Zen’s owner, astutely matches his plates with Ontario wines.

Where the canal meets the river looms the National Gallery, a glassy pyramid monitored by “Maman,” the supersize spider sculpture by Louise Bourgeois. Inside, I head for the Canadian Art galleries to follow its brushstrokes through the decades, highlighted by the works of the famed Group of Seven—landscape painters working just before World War I who took to heart, and brush, the romantic concept of Canadian identity to create works ranging from wide, open spaces (à la O’Keeffe) to lush canvases bursting with color (think Matisse). After them came the volatile Pop painters and the political artists of the ’60s (ironing board as a rocket launcher). The First Nations gallery pays homage to Charles Earnshaw, a Hainu aboriginal with works of pared-down beauty.

Anchoring the Quebec side of the river is the Canadian Museum of History. Its grand First Peoples Hall showcases houses and their awesome totem poles of five aboriginal communities of British Columbia under the ceiling’s giant canoe. Enter the houses to glean the story, through masks and other artifacts, that lead from origins across the Bering Straits (and a beautiful head sculpted 2,500 years ago) to powwows—the trade fairs of the day—to the Metis, with European explorer fathers. On the second floor, Canada Hall traverses the country to celebrate a thousand years of history via walk-in settings, from schoolrooms and farm houses to the fisheries, mines and mills that built the nation. 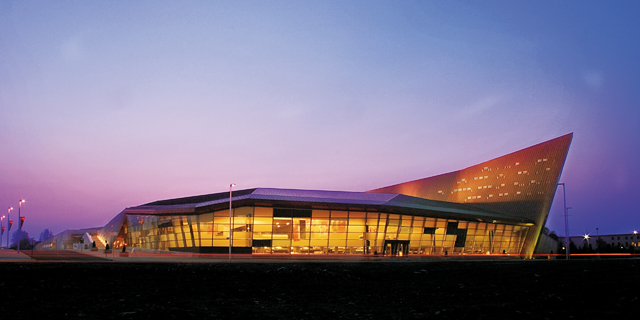 Its sister archive, the Canadian War Museum, is a must. Organized to depict “the impact of war on ordinary people in extraordinary times,” my guide explains, the journey begins in Memorial Hall—gray and foreboding, lined with tombstone-like slabs. Walls, ceilings, and floors are uneven, meant to convey the instability of war. A meandering path leads visitors through four divisions: First Nations through the European Confederation, the ejection of Acadians, the War of 1812 (“an even exchange which nobody won”), the debacle on Quebec’s Plains of Abraham: “the 30 minutes that changed Canada” as British troops fought French.

Next, World War I and the rush to enlist (lads needed a note from mum or wife) with its chlorine gas, trench warfare, and Canada’s own punitive treatment of immigrants. Then, after the war to end all wars, World War II. “World War I was viewed as a tragedy, with regret. In World War II we took more pride. A country to be counted on,” and pivotal in protecting the Atlantic Ocean, manufacturing weaponry and training British troops. Artifacts include Hitler’s infamous auto. “He utilized his image just as Roman Emperor Augustus did,” says my guide, who never paints a black or white picture as we continue through the Cold War, Korea, and Vietnam. Q= Is war bad or good? A= yes.

And a bit of trivia on view: After WWII, the government paid a researcher to develop the notorious “fruit machine” to help identify gays, “More vulnerable to blackmail by foreign governments.”

Then a “war” of another sort at the Museum of Nature’s fossil gallery, where dinosaur battles are described in a play-by-play like a football game. Seemingly every preschooler in Ottawa roared in approval. Fast forward a couple million years to visit the iconic animals of Canada—polar bear, moose, seal, whale—and learn how they adapt for survival. Turn a crank and cause an earthquake or volcano. Make a rock. It’s all hands-on.

From here, it’s a quick hike to The Glebe, a boho neighborhood (home of those Kettleman’s bagels) lined with eateries, shops of home décor and must-have togs, and Octopus bookstore with its solid section of Canadian authors. Or head for the Wellington ’hood, home of Allegro (favoring classy neo-vintage style), and Footwear Boutique (hot pink suede peeky toes, and stacked heels with red and white valentine cut-outs). Flock showcases Canada’s indie designers (love the bow ties!). Sooo, Ottawa the Dowdy? That was then. This is the wave of the future. For information, visit www.ottawatourism.ca. 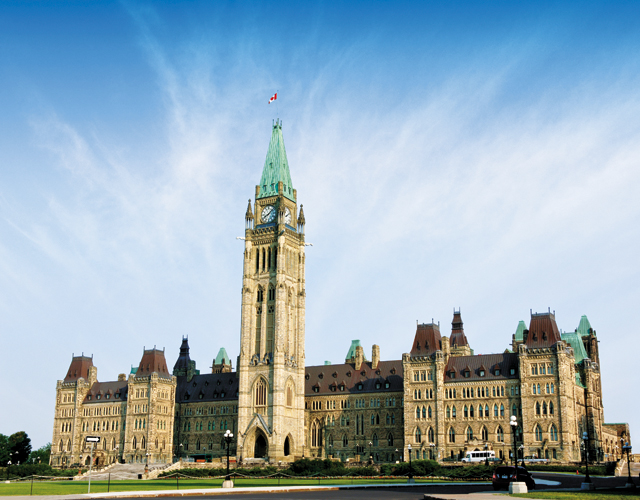 In 1971 Ottawa staged Canada’s first-ever GLBT demonstration, and it’s been leading the way ever since. The Village gayborhood occupies a 6 x 2-block stretch of Bank Street, with 40 gay-friendly businesses. For bars, clubs and events, including Pride, visit www.outottawa.com.