Orthodox Judaism Vs. Homosexuality in a Numinous Production with a Fresh Perspective at MJTC 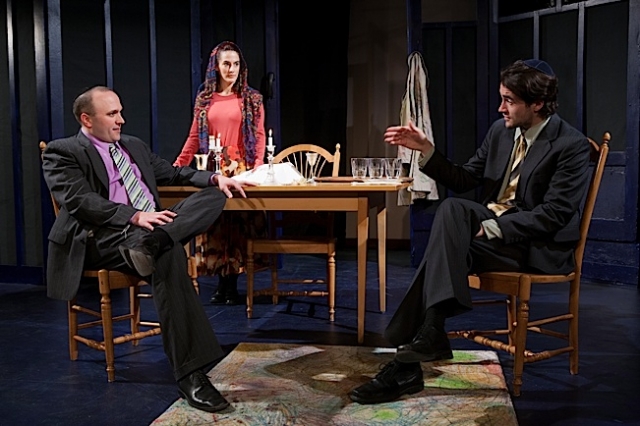 If you think gay-themed plays have come to tell you things you’ve already seen and heard before, then you must see A Strange and Separate People, now in a magnetic production by the Minnesota Jewish Theatre Company. Jon Marans’s play involves Stuart, a handsome Jewish gay man who pursues Orthodox Judaism, a branch of the faith that has zero tolerance for homosexuality. When he goes to do business with Phyllis, an Orthodox caterer with an autistic child, she is charmed by his good looks but unsettled by his gayness. When she invites Stuart to the ritualistic Shabbat dinner with her husband, Jay, tensions crackle from beneath the surface. The Shabbat scene itself is an ingeniously inventive piece of religious psychological warfare enacted exquisitely by director Kurt Schweickhardt’s topnotch three person ensemble. Angry gays and judgmental religious conservatives, can both be tedious with their chronic scripture wars at times, unless we’re talking about Uganda, the Congo, or Middle Eastern and Asian countries where even suspicion of being gay can be a death sentence. But Marans’s New York perspective manages to breathe fresh life into that perennial conflict from a Western angle. 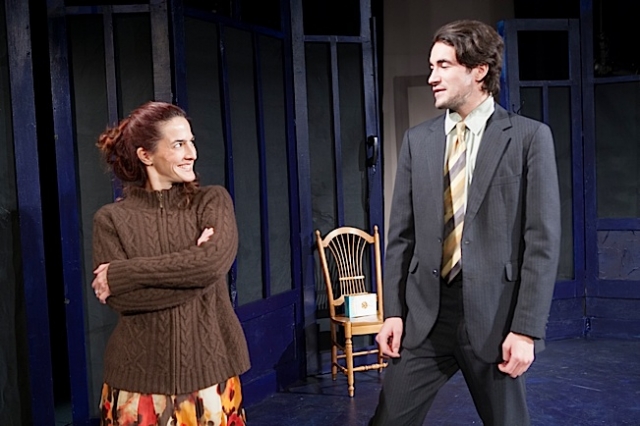 Nate Cheeseman, who looks like a young Gregory Peck, takes us on a devious journey down rationalization lane as he tries to fit his gay identity into the orthodox straitjacket. It’s a rich performance that may take you by surprise. Elena Gianetti’s terrific performance as Phyllis, balances the woman’s rigid, albeit well-informed religiosity, with a deep sense of compassion and humanity. It’s a refreshingly unstereotyped view of a right wing woman that owes as much to Marans’s penetrating writing as it does to Gianetti’s insight. She’s simultaneously maddening and endearing – quite an accomplishment. Brandon Bruce’s poignant portrayal as Jay vividly probes how religious indoctrination can and does undermine human nature. The spirit is always conveniently and unquestionably superior to the flesh, hence, you don’t have to be Jewish to appreciate the wrongheadedness of such a concept. All major faiths and countless minor ones have branches that cling to that body-hating, authoritarian notion and the world continues to pay a tragic price for that. Indeed, it’s yet another first-rate production by MJTC. Unfortunately, this show continues a negative trend in local theater where works that last well over an hour and a half have no intermission. This is a trend that needs to stop.