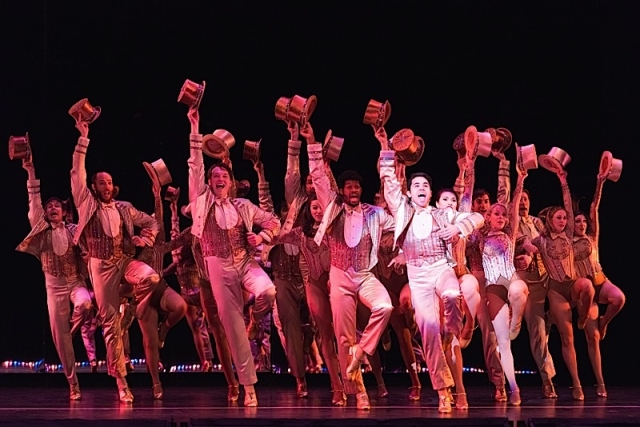 Ordway Center’s vibrant revival of A Chorus Line soars with a terrific cast that not only moves and sings splendidly but reveals the deep vulnerability that still rips your heart out 40 years after it first opened. Co-directors/choreographers James A. Rocco and Kerry Casserly are admirably true to the original vision of Michael Bennett’s landmark and intimate Broadway sensation. It won both the Tony for Best Musical and the Pulitzer Prize for Drama.

One of A Chorus Line’s emblematic scenes is between a dancer, Paul, who courageously relates the internalized shame he feels over being gay and the jolting experiences thereof that formed his sense of self. He does this in front of casting director/choreographer, Zach, an alpha hetero male, who takes him in his arms. Simple, but monumentally profound and dramatically groundbreaking. In the mid-’70s men who were men’s men, even in show biz, were compelled to keep their distance from empathizing with gay men. Also, it’s a beautiful image of the tough guy as nurturer-healer. In the ’70s that scene was instructive and illuminating for such men in realizing they could be empathetic toward gay men and their issues.

That scene is marvelously played at the Ordway by Tom Berklund as Zach and Omar Garibay as Paul. The empathy is palpable. Conductor Raymond Berg’s orchestra finds the exhilarating essence of Marvin Hamlisch’s immortal music score. The production’s only weakness is that a few of the men’s costumes cover their bodies far too much, so there is no sense of how they are actually moving. The women’s outfits are perfect. But men or women in baggy clothes are not plausible in such an audition process as that which the musical portrays. Costumes were designed by MaryBeth Gagner and Andrea Gross.