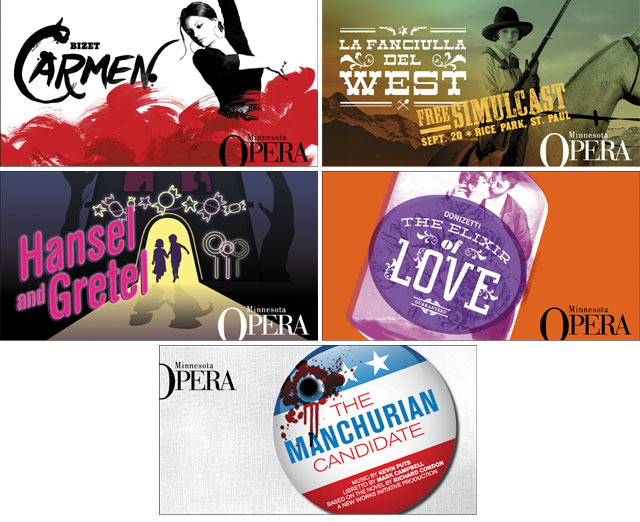 Tip from Dale: Get your tickets now. “Carmen will sell out,” predicts Dale Johnson, artistic director of Minnesota Opera, which will stage Bizet’s eruption of sizzle, steam and gore (and castanets) as season finale, April 25 through May 10. He’s ecstatic, of course.

There’s only one catch: Johnson is retiring the company’s ultimate Carmen, an unforgettable production already mounted three times—most recently in 2005—“so it’s scary to replace it. But,” he knows, “it’s time. So I wanted a very different take on it. I want it colorful, interesting, and—because Carmen herself is an archetype—exotic: like she originally appeared to the first French audiences in 1875. The idea she reiterates is, ‘I want to be free! No one’s going to step on me, even if it means death.’ So for the mid-19th century, she was quite evolved.” Nora Sourouzian, a French-Canadian/Armenian mezzo soprano, is “one of the reasons to restage it now. When I heard her, I was bowled over: ‘At last! I’ve found somebody!’”

The season kicks off September 20 with another don’t-mess-with-me lady, ahead of her time as well: not in southern Spain but the American Southwest—Puccini’s La Fanciulla del West (Girl of the Golden West), Minnie. It’s the wild, wild West as imagined by an Italian guy from Lucca—exotic again, idealized, and in the Opera’s production, “Beautiful! The three acts employ three different stage sets!”—fitting for a late Puccini opera Johnson calls “Big, broad, exciting—and kind of overwhelming.”

Why now? Again, it boiled down to cherchez la femme. “Casting it is difficult, especially Minnie. I’d heard British soprano Claire Rutter audition (we’d tried to hire her before, over the years) and said, ‘Wow! Can you sing Minnie?’” She’s romantically balanced by a rake with a beautiful tenor voice. Greer Grimsley, an Opera audience favorite, will portray the villain, Jack Rance. (“When Greer’s available, we hire him!”) Add in a rambunctious all-male chorus with lots of gun fighting, and you’ve got a show.

Just before Thanksgiving (there’s a lesson here) comes Hansel and Gretel. But this is not Grandma’s production, with cherubic kids in apron and lederhosen. “It’s a new production, and very non-traditional,” Johnson promises with a sly smile. The story, he says, shares “an affinity for a kind of Route 66 in the Great Depression story—hungry, starving kids. And in those years, the idealized vision of the time was Hollywood: Fred Astaire, Ginger Rogers. So”—follow along, here—“we’ll set it in a funhouse-fantasy-world carnival they go to. Very colorful, very exciting. There’ll be different ‘takes’ on the usual witch,” he promises. “And the angels.”

Calls for a stiff drink, I’d say. So does the Opera, so it’s followed in January by The Elixir of Love, a frothy comedy by Donizetti, master of bel canto—“and as a bel canto comedy, it’s my favorite,” divulges Johnson. “I like the characters, based on commedia del arte traditions, but also with a warmth to them—not mean, not slapstick, but real emotions. It’s very pretty: a warm show in the middle of winter,” just when everyone can use a magic potion or two.

Next up, in March, is the world premiere of another work by the Pulitzer Prize-winning duo (awarded for the Opera’s Silent Night), composer Kevin Puts and librettist Mark Campbell. Silent Night was set on the battlefields of World War I. Their new works takes place in the Korean War.

“When we asked them, ‘What do you want to do next?’ They came right back with The Manchurian Candidate.” The chilling story of a soldier brainwashed into becoming an assassin to provoke the overthrow of the U.S. government was first a novel, then the thriller movie of its day. “The story is very operatic,” insists Johnson: “fast-paced, very edgy, more like a movie. The music is spiky, but with moments of great beauty. Brenda Harris”—another returning Opera audience favorite—“will play the Angela Lansbury part, one of the great villainesses of moviedom. And Lansbury is Brenda’s idol.”

All productions are sung in the original language with English translations projected above. For more information, visit mnopera.org.

And for more opera, head to the University of Minnesota’s School of Music shows at Rarig Center: a Carmen of its own November 20-23 and The Marriage of Figaro April 16-19, with live orchestra and singers from the school’s program and faculty. In June, Skylark will produce its annual light opera—this year, Puccini’s La Rondine. The Cowles Center will not offer a concert opera this year, as in the past. Rather, the song-and-drama version of soprano Maria Callas’ life on March 15. And there’s always the Metropolitan Opera, now that the Met’s threatened season lockout has been averted. It simply requires a radio tuned to MPR on Saturday afternoons or a visit to a theater offering a simulcast of the week’s production. See metopera.org/metopera/liveinhd/live-in-hd-2014-15-season to locate a movie screen near you.