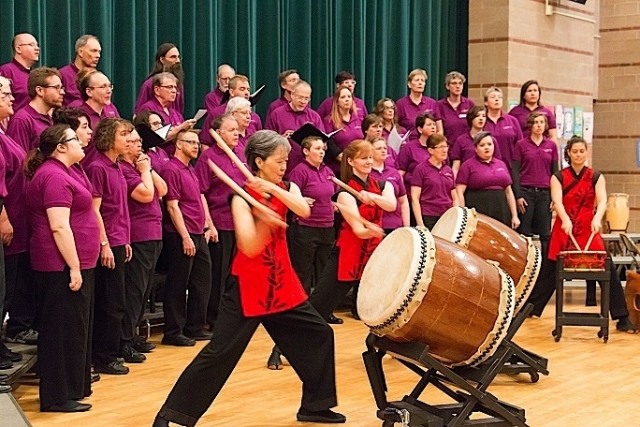 Our community has a wealth of talent. When paired with a drive for social justice that is deep and wide, we get to experience music with a mission, something at which One Voice Mixed Chorus excels. I was able to chat with them about their upcoming concert and find out what else they have in store for the rest of the season.

One Voice Mixed Chorus is teaming up with Mu Daiko for Queer Thunder!, a special performance that incorporates taiko drumming into a One Voice concert. How did this come about? What will it include?
In 2006, One Voice Mixed Chorus was the first chorus ever to take traditional choral music and combine it with the exciting Japanese art of taiko drumming. Ten years later, we’re doing it again, only bigger, bolder, and even louder! Queer Thunder blows the top off your conventional choral concert, with a one-of-a-kind, cutting-edge show that combines the vocal excellence of One Voice with the heart-pounding drama and excitement of taiko drumming from Mu Daiko. A couple of weeks ago, we took the drummers with us on our annual OUT in Our Schools tour. It was amazing to see the energy that the kids had being part of the concert with so much energetic percussion!

Queer Thunder includes several unique pieces especially designed for chorus and taiko drummers. “This was a particular programming challenge,” remarks Artistic Director Jane Ramseyer Miller. “I can’t run to the music store and purchase a score for chorus and taiko players so I had to create or redesign all of the music we are performing together.” The three drummers from Mu Diako have spent much of the winter rehearsing and preparing the music for this concert. “Since traditional taiko players do not read western musical notation, we spent the first few rehearsals figuring out a common language for how to build this music together,” notes Ramseyer Miller.

In true One Voice form, the eclectic music of Queer Thunder explores global music, spirituals, pop, and newly composed choral compositions. Audiences will enjoy the fast-paced Georgian “Drum Song,” Eleanor Daley’s a cappella “In Remembrance,” a Buddhist mantra and a rip-roaring arrangement of “You Can’t Stop the Beat.”

“Some of my favorite songs in the concert are composed by Minnesota composers,” notes Ramseyer Miller.  “Catherine Dalton, Christopher Aspaas, and Jake Runestad have all composed gorgeous and unique pieces in this concert.” 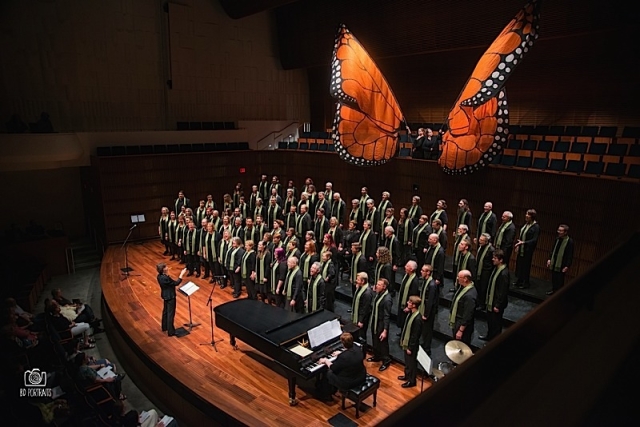 How will this be different from other One Voice concerts?
We are premiering two brand new compositions by St. Olaf grad, Mari Esabel Valverde, and they are some of the most powerful pieces the chorus has performed. Even though Valverde is currently living in Texas, her heart is still in Minnesota.

Valverde, a transgender woman who transitioned during her years at St. Olaf, selected the poetry of queer artist Amir Rabiyah for her setting of “Our Phoenix.” Rabiyah’s poetry explores a journey of brokenness into healing and transformation and Valverde has set it for SATB chorus, piano, and trumpet.

Here’s what Mari has to say about it:  “Our Phoenix’ is ours because we, the people, the queer population and our allies, share this life-struggle. When one stripe of our rainbow is denied the right to life, liberty and the pursuit of happiness, when we are targeted, harassed, assaulted and pushed beyond the edge of mortality, the impact comes back for everyone. We only have ourselves to hold accountable, and our response will set the tone for the generations who survive us. As a composer, more than profit, more than a pristine recording, more than admiration, this is what we wish for: to communicate with many people at a deep level. To empower them and inspire!”

Can you explain to us what to expect from a virtual performance by the Beijing Queer Chorus and tell us a little bit about that?
The Beijing Queer Chorus is China’s first LGBT choir, founded in 2008. They’ll be joining us via video for Queer Thunder, as part of this concert’s global theme. What’s really cool though, is that they’ll be joining us in person at the 2016 Gay and Lesbian Association (GALA) Festival this July in Denver for a performance of “I Am Flying” by Taiwanese composer, Nan-Chang Chien. The song is in Mandarin and will be on the set for Queer Thunder as well. 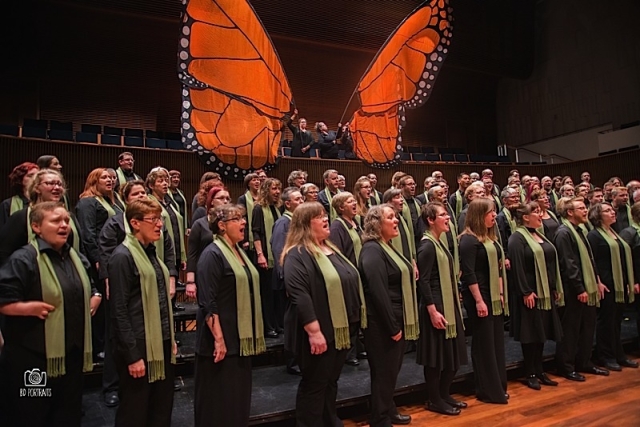 What does the rest of your season look like for programming?
After this we’ve got the Queer Music Consortium Concert in early June, and our annual Pride Concert on June 26 at St. Mark’s Cathedral on Loring Park. We’re also bringing back Showtune Showdown in June after a smashing success last year. This is turning into our annual fundraising event, and is a game show where choirs compete by singing showtunes and answering trivia with a costume contest and a ton of audience participation. That’s on June 13 at the Woman’s Club, also on Loring Park. Then, we’re off to Denver for the GALA Festival! We’re actually taking the Taiko drummers with us, to share with LGBT choirs from all over the world.

What other collaborations do you have in the works?
Oh, boy! We have some major collaborations coming up in the next year. We’re currently working with composer, Steven Milloy, to create an oratorio on the life of Bayard Rustin, a gay, African American civil rights leader which will premiere in January 2017. Then we’re bringing in the string quartet, Well-Strung, for a concert in March featuring another big commission by George Maurer and Sierra Demulder in collaboration with the American Composer’s Forum. So there’s a LOT going on at One Voice. You can get connected with us at www.onevoicemn.org or just search One Voice Mixed Chorus and you’ll find us on social media.

Queer Thunder! with One Voice Mixed Chorus will be at Hopkins High School Auditorium on Saturday, April 16, at 7:30 p.m. and Sunday, April 17, at 3:00 p.m. For more information and to purchase tickets, head to www.onevoicemn.org.