The Ordway/Park Square staging of Grey Gardens, undoubtedly Broadway-caliber, dazzles with its way of engaging confronting ideas around the calcifying effects of traditional marriage, money, and family. As directed by Jayme McDaniel and James Rocco, this vibrant vision also hearkens to big-book musicals of the 1960s like Hello Dolly! and Sweet Charity, while infusing a crisp, quirky sense of surrealism that suits our own volatile day.

Something else in touch with today’s call for transparency is Grey Gardens’s frank depiction of the toxic relationship between Edie Bouvier Beale and her gay piano accompanist, Gould. As we enter a period today where transparency is demanded of military torturers and big banks, so Grey Gardens makes a brutally honest observation about straight women and their gay male friends. Christina Baldwin and Michael Gruber nix any political correctness in their roles, spiriting forth a savvy grotesqueness that comes out of each character’s internalized self-loathing. Yet, for such a big show, they’re marvelously and insidiously understated. We clearly get the sense that when they gang up on Big Edie’s daughter, Little Edie, endearingly played by Zoe Pappa, they are projecting their own miserable envy of her youth, beauty, and prospects. It’s an archetypal story of the Dragon Lady and the Vicious Queen.

Millions of intelligent people around the world look forward to their Sunday New York Times just so they can read Frank Rich’s brilliantly nuanced op-eds. Rich, who also once served as that newspaper’s theater critic, also happens to be a huge admirer and excavator of Tony Kushner’s plays. Unless you’ve been hiding under a rock, you know that the Guthrie Theater is facilitating a celebration of a Kushner musical, a new commission, and several of his incisive one-acts. Rich will give a public presentation about Kushner’s work.

Saturday Kushner seminars will be presented at the Guthrie by some top-notch University of Minnesota professors. Delve into Kushner’s place in modern theater with Josephine Lee. Look at the relevance between socialism and homosexuality with Andrew Elfenbein. Examine the playwright’s theatrical influences with Judith Katz. Explore how America’s struggling superpower status is reflected in Kushner’s plays with Roderick A. Ferguson—indeed, no American dramatist of such prestige has taken on the superpower issue like Kushner has.

Tony Kushner’s Pulitzer- and Tony-winning groundbreaker actually is not being staged by the Guthrie. But Lowry Lab’s production could be worth seeing to get a feel for how the AIDS epidemic influenced the playwright’s sensibility. The play captures the wreckage of what closetry brings. We see two spouses in a hetero marriage go into free-fall in their own separate, horrifying ways.

You’ll want to catch Robert Gardner as what may be the most notorious closet case ever written for the stage: Roy Cohn. Gardner was named this column’s Best Supporting Actor last year for his terrific performance in Walking Shadow’s The American Pilot. The Cohn character haunts the Justice Department in search of studly young interns. Though the setting is the ’80s, it’s striking how ahead of the curve Kushner was in intuiting and exposing the closetry so many ultraright Republicans now have come to be known for.

Janczewsi’s aesthetic is pansexual, so you will see same-sex coupling and multisex groupings.
Pop also includes the revival of Arena’s 2003 dance piece Resonance, which Janczewski calls “otherworldly and primal.”

The performance location is the Lab Theater, which theater-goers will remember as the Guthrie Lab before the Guthrie shifted operations to its new digs by the Mississippi River. The new Lab is becoming more and more of a focal point for fun and “out there” entertainment. 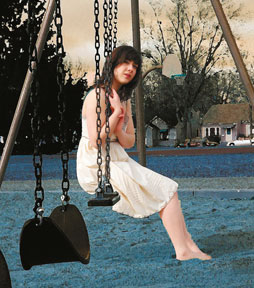 The explosive issue of adult sex with minors is the stuff of Teach Me Tonight, first written 15 years ago by Ariel Pinkerton when she was only 15. Now, 20% Theatre Twin Cities is staging this tale of high school sweethearts, a charming older man, and the collapsing of boundaries. It features Emilia Aghamirzai and Christopher Kehoe as April and Mike.

Pinkerton notes, “We still see throughout our culture the idea perpetrated that within relationships, men are the ones in power and ‘in charge’—the dominant decision-makers—and that a woman’s role is to be submissive and agreeable. How much more control and power is then added when you introduce a large age gap between them? Teach Me Tonight highlights this not only by pairing a teenage girl with a much older and more experienced man, but by having him also act as the emcee of the show, able to control and correct April’s every word and movement.”

Director Leah Cooper adds that our culture “demonizes, even criminalizes, intergenerational romance. But the same culture tolerates media saturated with role models, and imagery that condones and glamorizes it. Adults manage to stay almost willfully ignorant of it when it’s happening to a teen they know, and do little of practical use to protect teens, but then express outrage, shock, and much hand-wringing when reality is exposed. This play tolerates no such ignorance, as it dives right into this surprisingly ambiguous moral territory with a story that captures exactly, specifically, how it happens, how it looks, how it feels.”