Two of our most charismatic local actors, Terry Hempleman and John Catron, are featured in The Velvet Rut, the latest by James Still, who wrote the wonderful gay-themed Iron Kisses. This time, he explores a close relationship between a high school teacher and a Boy Scout.
Director Michael Robins, who directed Iron Kisses as well, says, “James’s plays are about the things that move us in our lives. This one’s how a teacher comes back to himself after the horror of surviving a school shooting. The Boy Scout [Catron] spends the play taking Mr. Smith [Hempleman] camping, and trying to help him get back his life. The play has everything you’d expect while two guys are out camping: fires that go out, scary nighttime stories, storms, fights, coyotes, and endless starry skies that give us the chance for true soul-searching.” 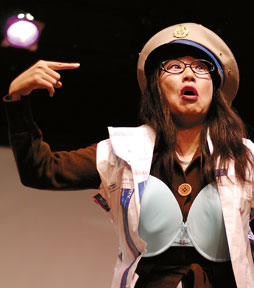 Hence, Wong calls herself an “unreliable narrator. I introduce ‘the Dramatic Arc of Fiction’ as the framework for how I will tell the story. I think it is a certain sense of ‘fiction,’ or how good people are at hiding their personal truths, that is a source of depression—particularly among Asian-American women.”

Wong also employs the use of actual yarn, which unravels throughout Cuckoo’s Nest. Unfinished knitting pieces from knitters the world over hang from above.

As Wong explains, “They represent unfinished lives that are unraveling. It’s one way in which I point to the numerous lives that are falling apart around me, as well as the ‘yarn’ of my story, which also falls apart.”

The gloriously obscene Queen of Mean, Lisa Lampanelli, makes Margaret Cho look like a sissy boy. It would be fairer to compare Lampanelli to Lenny Bruce, except she’s got it a lot more together than he ever did. She has been knockin’ em out of the park with her comedy for 17 years now, and her cheering section only gets bigger and, of course, rowdier—but not as rowdy or raunchy as Her Majesty Herself.

Lampanelli reflects, “The faggots seemed to jump on board after the Pamela Anderson Roast, because they think she’s a drag queen. What happened was, they started to like me. But I’m lucky enough that I only get about 20 percent faggot in the audience. I mean, I like straight people, too. I’m not racist against straight people, and I like interracial couple audiences. That’s fine—always the colored guy with the fat white chick. So, yeah, I think faggots just really enjoy me because I’m loud and big, and everything they dreamed they could be with tits.”

As for dykes, Lampanelli, a straight gal, still hasn’t jumped on board “the tuna boat”—her words—but she’s very frustrated that the dykes who try picking her up after her performances are so much hotter than the guys who try to pick her up.

Meantime, Lampanelli confides, “I’m a little angry with Minneapolis, because I met a guy there—a firefighter, a black firefighter. He’s really sexy, and, like, we totally made out, and, like, he’s never called me again. And I was mad. If you’re out there, black firefighter, come to the show, and take it like a man, you little bitch ass!”

Julie Dafydd is known to most of us as Lavender’s zany humor columnist. But she’s also a serious actress who relishes sinking her teeth into a juicy dramatic or dark comedic role.
Fresh from her droll turn as the opium-smoking caterpillar in Minneapolis Community and Technical College’s politically incendiary Alice in Wonderland, she waxes dictatorial in Miss Margarida’s Way, Brazilian Roberto Athayde’s so called “Tragicomic Monologue for an Impetuous Woman.”

Scott Rubsam, who directed Theatre in the Round’s productions of Pack of Lies and The Effect of Gamma Rays on Man-in-the-Moon Marigolds, is guiding our beloved columnist, as she pushes the envelope.