Gay teens, Internet sex, and adults on the down-low fuel fun and fury in Speech and Debate, by 20-something Stephen Karam, at Illusion Theater. When high school student Solomon crusades against closeted neocons, we assume he’s at least a straight ally of queer folks, but events reveal he’s a victim of Exodus International’s crusade to screw with young gay psyches—supposedly to “straighten ’em out.” 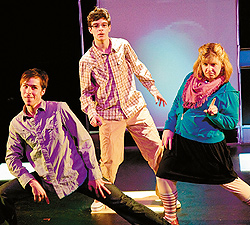 Wanna bet that down the road, some same-sex marriages actually will take place between Exodus victims?

As we leave Black History Month (February), and enter Women’s History Month (March), what could be more dreamy than the creamy a cappella sounds of Sweet Honey in the Rock? The Grammy Award-winning sextet performs as part of the College of St. Catherine’s first-rate Women of Substance series. Those six include an American Sign Language (ASL) interpreter. Their name brings to mind a perennial theme of African-American life: the Promised Land. It derives from Psalms 81:16, which describes a land so rich that when the rocks opened, honey flowed out. In Sweet Honey’s sound, you hear echoes and reverberations from the African-American spiritual genre brought from Africa to the slave plantations of the Antebellum South.

Western culture’s way of submerging sexual desires and then “acting them out” surreptitiously is revealed nastily in Hitchcock Blonde, by Terry Johnson. At the Jungle, it ranks among the most visually gorgeous shows ever, and probably the most gruesomely funny.

A perfectly formidable Tom Sherohman as the fabled filmmaker leads director Joel Sass’s exquisite cast, as it bravely plumbs psychosexual undercurrents that lead men toward cruel and potentially sadistic behaviors. The whole is charged evocatively by Barry Browing’s film noir lighting, as well as Sean Healey’s sumptuous music that nods heavily to Bernard Hermann’s swelling Hitchcock film scores. Though the plot lines get rather fragmented, it makes for a fascinating pondering of sex and power. It’s elagantly lurid.

Though homophobia poisons too many religious institutions, Spirit in the House, an interfaith spiritual performance festival, is queer-friendly.

Among its many offerings is After Leaving Eden, a multidisciplinary work created by lesbian artist Rachel Nelson. She plays male, female, and androgynous characters, one of whom spoofs politics in drag. Images by lesbian photographer and military veteran Chante Wolf are integrated into the show to reflect participation by GLBT folks in the peace movement. Direction and videography are by Kym Longhi. Drumming is by Linda Melcher.

Saving Pagan Babies: Catholic Culture Clashes reminds us that though we think a religion or denomination is monolithic, more radical variations well could be beneath the surface. This hour of storytelling will appeal to those who sometimes feel bewildered by all the rights and wrongs around religion. Performers include Ann Reay, Curt Lund, Loren Niemi, and Paula Reed Nacarrow.

Gale says the work “focuses more on my Jewish side, less on my gay side.”

However, Gale is quick to imply that this international hit he cowrote with Randy Vancourt has an irreverent gay sensibility expressed in camp musical theater spirit.

Gale warns, “Within the first five minutes, we sing ‘Yiddish Kiss My Ass.’”

What also unfolds is a spoof of what Gale calls “quasiprofessional, semiprofessional Jewish folk dance troupes that thought they were very good—where the singer can’t quite hit the high notes.”