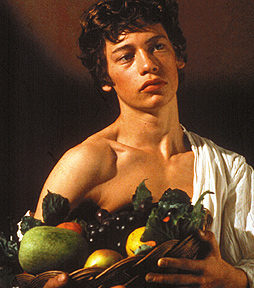 Lee creates what are called “sonic sculptures,” inspired by reflections on the Industrial Revolution and nature via his fascination with electromagnetic radiation.

If you came of age as an out queer person in a major metro area in the late 1970s and early 1980s, then Brit filmmaker Derek Jarman (1942-1994) likely entered your sphere of consciousness at one time or another. Visceral, homoerotic, and transgressive, a Jarman film has a way of getting beneath the skin.

Cocurator Dean Otto says, “Derek Jarman’s films ignited controversy as well as reverence for his unapologetic embrace of homoerotic themes. He was outspoken in his support of gay rights, and was one of the first artists to publicly address his HIV status in the height of public fear around AIDS. His work crossed the disciplines of film, painting, and design, which is why his work has been embraced by the Walker Art Center. In fact, Walker organized one of the first retrospectives of his film in North America in 1986: Angels of the Apocalypse. His death in 1994 has left a void in the British avant-garde that is lovingly addressed by his muse, Tilda Swinton, in Isaac Julien’s new documentary, Derek.”

The new Walker series begins with Derek (February 20), directed by Londoner Julien, who gave us gay indie sensations Looking for Langston and Young Soul Rebels. Jarman’s Jubilee (1977) imagines Elizabeth I time-traveling four centuries later to London’s punk scene (February 21). Caravaggio, Jarman’s groundbreaking 1986 film based liberally on the life of the Italian Baroque master, is inspired visually by his paintings, and features Swinton as prostitute Lena (February 21). You can’t get more classically homoerotic than St. Sebastian, and who better to plumb that than Jarman? You can wax passionate with his Sebastiane (1975), filmed entirely in Latin (February 22). If you’re into even further experimentation, check out Jarman’s music films (February 26).

It’s one of those stereotypes that sometimes proves to be true: Gay men worship at the altar of Musical Theater, presided over not so much by great composers or lyricists—though they are surely apostolic in The Musical’s Holy Order—but rather by the great women characters of musicals who are the goddesses.

Those goddesses are supplicated in the world premiere of Blue Umbrella’s Dreamboys. Just imagine being a gay man auditioning for My Fair Lady, yearning for the role, not of Henry Higgins, but of Eliza Doolittle, and you’ll get this revue’s drift. Five marvelously talented men sing marvelous show tunes typically sung by marvelous women. But that doesn’t mean every song’s going to be like a Streisand finale or a Merman showstopper.

For instance, performer Paul Whittemore shares, “I’ve always gravitated toward the big, emotional, heart-on-your-sleeve musical numbers, and, let’s face it, those are usually sung by women. When selecting songs for the show, Suzy Winters, our director, was always steering me away from the big, 11 o’clock numbers, because those were the ones I’ve kept coming back to. She wanted me to convey a wide range of themes and emotions, so now, we have quiet, introspective moments like “Lying There,” from The Last Five Years, to “Gimme, Gimme, Gimme,” from Thoroughly Modern Millie. One of the things I’m enjoying most about the show is how we’ve combined material from crowd-pleasers like Wicked and Millie with that of lesser-known pieces like Title of Show and Light in the Piazza.”

Funny boy Doug Anderson promises, “Paul Whittemore will blow you away with ‘Gimme, Gimme, Gimme.’ I do a number called ‘Man Wanted,’ from Copacabana, with the other four guys as backup dancers. I feel a little like Mitzi Gaynor or Marilyn Monroe. However, I am aware that I look like Mickey Rooney. I also do an Elaine Stritch number called ‘If’—all about being dumped.”

Fear not, Doug. Your vibrant coactors—Tim Kuehl, Bart Ruf, C. Ryan Shipley, and Whittemore—will pick you right back up.

Roman Emperor Caligula is synonymous with the term “decadent.” Because he had so few boundaries around sex and violence, he is the poster boy for sexual excess, under which queer sex has been categorized ever since Christianity superseded pagan Rome. Walking Shadow Company, always up for wrestling with charged subject matter, is taking on existentialist Albert Camus’s signature play about this madman’s life.

Director Amy Rummenie notes, “David Greig’s translation embraces Caligula’s rebellion against mediocrity and societal conventions, focusing on a man so obsessed with achieving personal freedom that he forces an entire society to follow his skewed line of logic. Despite his sensationalism and cruelty, Caligula’s acts prove his larger point: that in a random and uncaring universe, no action has inherent meaning. So, he takes on a new role: acting as the bland and impartial face of fate itself in an attempt to prove his philosophy—not philosophy as practiced over books and coffee, but a kind that grips a soul, and shakes an entire nation. By forcing others to view the truth as he sees it, Caligula underscores Camus’s moral that ‘one cannot be free at the expense of others.’”

Penumbra, the nation’s flagship African-American theater, is unsurpassed by any in its continual exploration of unknown annals of history, and director Lou Bellamy is truly a master of revivifying such history. He and Penumbra are bringing to life The Whipping Man, by Matthew Lopez. Like Carlyle Brown’s Pure Confidence, a recent hit at Mixed Blood Theatre, we are made to look at just what it would have been like for freed men and their past oppressors to come back into contact after Emancipation. It’s an ideal choice for Black History Month.

Bellamy appreciates how The Whipping Man examines what he calls “two seldom-explored historical realities: the role Jews have sometimes played in what came to be known as the ‘peculiar institution’ of slavery; and the existence of black Jews. I was impressed with the manner in which the playwright particularized the situation by setting his play during the Passover season just as the Civil War was ending. The dual emphasis on freedom and responsibility, for me, was striking. Audiences will hear black ex-slaves speaking Hebrew, and conducting a Seder—fascinating and enlightening—a reality that was far more common than we, in the United States, have come to believe.”

If you’re mourning that Chris & Don: A Love Story was not nominated for an Oscar for Best Documentary, you at least can work through it by catching Theatre in the Round’s revival of John Van Druten’s I Am A Camera, drawn from Christopher Isherwood’s Berlin Stories. It’s a rare op to (1) enjoy original sources of the musical, Cabaret; and (2) see how a theater and a director—respecting how plays are written—take on a classic play that exudes rather than overtly depicts homosexuality.

Director Matt Sciple points out, “The gay issues in Camera are subtextual. It was not written as a ‘gay play,’ nor is the character Christopher Isherwood written as a gay character. That being said, we’re approaching the question of his sexuality as a strong undercurrent to the main themes of making choices—or not—as history sweeps you up in it. Just as Chris [David McMenomy] attempts to maintain his objectivity long after that is possible, he doesn’t reveal his sexuality—at least onstage—to Sally [Katie Guentzel], even though she almost certainly wouldn’t care.

“The other male characters in the play dance right up to the edge of openly confronting him about it, with the character of Clive [Joel Raney]—some elements of which are adapted from Isherwood’s Mr. Norris—propositioning him pretty directly. The issue of Chris not revealing and accepting his true sexuality, then, runs parallel to his moral ambiguity in the face of an undeniable evil. The play is about the gradual erosion of his objectivity, as he stands up for himself and ultimately for others in the face of Nazi persecution. His victories are small and largely offstage, while his uncertainty and love for/fear of Sally are front and center. This allows the audience to participate in the moral relativism in a way that is visceral, funny, and extremely entertaining.”

Chinese slavery and teenaged gaming sound like an odd combination but that’s what plays into Ching Chong Chinaman by Lauren Yee, now presented by the region’s pre-eminent Asian American performance company, Mu Performing Arts. Director Jennifer Weir calls it a “subversive comedy that centers around a an unusual Chinese American family, blissfully unaware and irreverent of their own cultural identity and stereotypes. It twists and turns enlisting indentured servants, Korean orphans, infidelity, World of Warcraft, Princeton, golf, and a good ‘ol tapdancing showstopper to tell this family’s story. How the hell this all fits together is an amazing thing to see.” She says it’s moving as well.