Lula Washington is one of the great success stories in the history of African-American dance. Born into poverty, and unable to take dance lessons growing up in Watts, she did not pursue her destiny until she was a nursing student. Seeing the fabled Alvin Ailey American Dance Theatre spurred the energy that ultimately led to founding her own Los Angeles dance school and company. 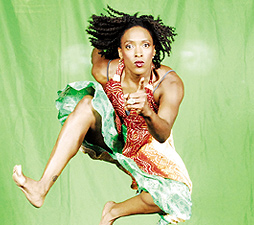 The Ordway is hosting Washington’s troupe, with its eclectic blend of hip-hop, jazz dance, and African movement. It opens with “Songs of the Disinherited,” a meditation on the struggle for justice and equality. One piece pays tribute to integration in 1957 at Little Rock Central High School. Another, “The Movement,” honors Rosa Parks, who refused to sit in the back of a Montgomery bus in Jim Crow Alabama.

What a perfect event to celebrate the inauguration of our first black President!

Everett’s latest, Two Left Feet, is, in his words, “inspired by a really sad little painting of two feet, one of them inexplicably blue.”

Showcased along with other short plays deliberately inspired by bad art, in Two Left Feet, director Laura Leffler-McCabe has reversed the script’s traditional gender roles. It now involves a female soldier who goes off to war, and returns as nothing but a foot. This must be considered Everett’s homage to Theater of the Absurd—in the footsteps of Ionesco, Beckett, and Albee.

Coulombe says, “This, too, is a metaphor, for hope, for the possibility of setting things right, regaining our judgment. Tulips are bulb flowers—something rather nondescript that you plant in the fall with the hope that in spring, after the harsh winter, something beautiful will sprout from the earth—order out of chaos, so to speak.”

Nobel Laureate Harold Pinter died of cancer December 24, 2008. Although heterosexual, he was highly sensitive to gay oppression and the fluidity of sexuality.

Scotty Reynolds is curating Mpls. Pinter Studies as a walk-through, of sorts, in the Minneapolis Warehouse District. You can see some of Pinter’s most queer-conscious short plays. Expect audio effects and atypical forms of theatrical presentation.

One of the selections, One For The Road, is dreadfully timely in our era of publicized torture.

Director Maggie Scanlan feels the piece is “heavily homoerotic, where the torturer/interrogator and his interrogatee are more like estranged lovers than strangers. And the threat or promise of consummation lies at the heart of their interaction.”

Jeffry Lusiak, known for his artistic directorship of queer theater troupe Outward Spiral, stages what is arguably Pinter’s most forthrightly gay-themed play, the forlornly existential Family Voices, in which a mother lives in anguish about her gay son.

Lusiak shares, “It reflects the queer journey from home to the unknown. Many of us have experienced the journey of leaving our small town in search of ourselves, entering into a world we feel destined for, yet are naively unprepared to maneuver.”

As well, Terry Hempleman, who has gotten glowing Lavender reviews as an actor over the years, will direct his gifted and gorgeous wife, Camilla Little, in The Black and White.