Walker Art Center’s annual Out There series is still the best bet for those who relish experimental performance work from outside the Twin Cities. Three pieces are part of this year’s event. 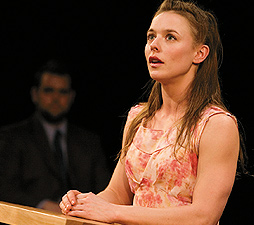 We’ve heard a lot about America’s image being tarnished abroad. Five Days in March looks at US attacks on Iraq as seen through the eyes of four Tokyo adolescents. Director Toshki Okada plays with our sense of time and human intimacy, as war raises its horrific head.

England features UK playwright/actor Tim Crouch and actress Hannah Ringham in a minimalist journey that uses the Walker gallery space. It played to great reviews and box-office success at the lauded Edinburgh Festival, as well as in Australia and Ireland.

New York’s Young Jean Lee gave us the mind-blowing theatrical satire Songs of the Dragons Flying to Heaven at Out There few years ago. She’s back with yet another New York hit, CHURCH.

Lee shares, “Basically, I grew up in an evangelical Christian community, and was always really turned off by religion—in particular, by the intolerance and homophobia. I went to Berkeley, where it seemed like practically everyone I knew hated Christians, and ended up in the New York Downtown theater scene, where I don’t think I met a single person who was really religious. Then, it started to dawn on me that the narrow-minded attitudes of my friends and me towards Christians had quite a bit in common with the Christians’s attitudes towards people they don’t approve of. So, I started to explore the possibility of making a Christian church service that embodied all of my lefty, open-minded views, and also tapped into the positive, even beautiful aspects of Christianity. The show was produced twice in New York, and both times, the atheists and the Christians were equally moved.”
Halfway Home
Through Jan. 18
Jewish Community Center
4330 Cedar Lake Rd. S., St. Louis Park
(651) 983-6626
www.urbansamuraipro.com

Lesbian tensions in a heterosexist society are a source of comedy in Halfway Home, by Diane Banks. The consistently sharp-edged Urban Samurai group is the ideal producer for this madcap look at dysfunctional family life.

Rebecca Gebhart, who plays a lesbian daughter, Brenda, relates, “The relationship between Brenda and her mother is like walking a tightrope. Brenda tries to overcompensate for a lifestyle her mother wouldn’t approve of or understand by trying to go above and beyond the call of duty for her. However, there is a level of resentment, because Brenda just wants to be able to live her life and love whomever she wants without judgment and persecution.”

Marcia Svaleson, who portrays Gwen, Brenda’s heartthrob, thinks that her character has “no malicious intent when she ‘crashes the party.’ I do, however, think she encourages Brenda to be herself, and not hide from what scares her, namely, coming out to her family. Gwen has gone through her own journey of self-acceptance, and now is very comfortable with who she is and how she lives her life. I think there is an element of pride also, for Gwen. She crashes the party because she won’t be the dirty little secret. Brenda and she have a life together and love each other, and to lie about it could undermine that, and, as she says in the play, ‘breed resentment.’ She’s been patient, but now, she needs to be acknowledged. And yes, because she’s comfortable in her skin, she’s exceptionally friendly and accepting. She’s not selling an agenda, and she’s not aggressive, just outgoing.”

Playwright Carlyle Brown and his lead actor, Gavin Lawrence, wowed us recently in that electrifying production of Are You Now or Have You Ever Been…

In Pure Confidence, set before the Civil War, Lawrence plays Simon Cato, a black jockey-slave whose exceptional talent puts him in contact with Colonel Wiley “The Fox” Johnson, played by Chris Mulkey of the gripping gay indie Mysterious Skin. Simon makes a fascinating effort to buy freedom for himself and his wife. When the war strikes, everything changes. Simon is a composite of men who actually existed, and Pure Confidence is the name of a horse.

The play, a hit at Louisville’s revered Humana Festival, was hailed by critics in productions in other cities. It’s a rare thing for Mixed Blood to take on a historical play. This selection seems a perfect choice, given that it’s a theater examining race relations, and history is where race relations were authored.

Charles-Francois Gounod’s Faust, with libretto by Jules Barbier and Michel Carre, is one of those rare works that resonates with polar opposite audiences. Hence, in a time fueled by Obaman rhetoric, for better or for worse, of ‘reaching across the aisle’, the 1859 classic has renewed relevance.

At the Ordway, Minnesota Opera has ‘reached across’ to New York’s Doug Varone and Dancers to enhance Faust’s tale of a man who sells his soul to Satan/Mephistopheles for youth and sexual conquest. The choreography mischeivously underscores the sinfulness with kinetic attendants flickering around Mephistopheles’s side, commandingly and classily played by Kyle Ketelsen.

Director-choreographer Varone achieves an archetypal sense that often rivets. There are delightful bits throughout derived from the awareness the mortal characters lack regarding Mephistopheles’s manipulations, but ultimately, there’s a real spiritual power that uplifts, no matter what your faith or absence of it.

All voices are first-rate. Nicole Percifield enchants in a sensitive cross-gender turn as Siebel, a youth infatuated with our heroine, Marthe (Kathleen Humphrey). The Hell scene is properly decadent in a way that recalls the films of Luchino Visconti, but thankfully, Varone doesn’t fall into any homophobic pitfalls that often go with such medievally-derived Hellacious concepts. But be warned: costume designer James Schuette’s leather and punk motifs, frankly, work quite well on Andromache Chalfant’s regal set.

Another stellar partnership is occuring between The Acting Company and the Guthrie with a crackling and bare bones staging of William Shakespeare’s Henry V. Director Davis McCallum’s text-driven interpretation actually makes one consider that this play deserves a higher ranking than it’s always been given in the hierarchy of greatness within the Shakespearean canon. Often regarded as a patriotic and even a pro-war play, McCallum’s shining cast mines the words’ imagery so that a graphic sense of military devastation is felt throughout. I wouldn’t exactly call it an ‘antiwar’ approach. It’s simply what’s in the text and it will still appeal to even militaristic conservatives, though McCallum’s view clearly details war’s grisly horror better than most productions of Henry V and so challenges any flippancy and apathy about war.

This staging also owes much to Matthew Amendt’s vibrant and bristling turn in the title role wherein every one of his numerous scenes has a contained, spontaneous, and fascinating life of it’s own. That’s why this production, for its almost three hours length, seldom lags. Amendt gives us a flesh and blood man who certainly has a heightened view of himself, but he also wrestles titanically with his temper. This is actually the hallmark of Amendt’s performance: he shows us how Henry is constantly trying to, to put it in contemporary terms, manage his anger. It makes us love and hate him. His is the best local Shakespearean performance since Jim Bovino’s Coriolanus by Flaneur Productions in ’06.

If you follow other local actors, you’ll surely be impressed by William Sturdivant’s growth spurt in various Henry V roles. It’s now time for him to get a lead Shakespeare role. Sturdivant definitely has the chops, the strength, and the charisma. Moreover, the entire ensemble is seamlessly precise and grippingly vital.