Jon Ferguson Theater & Ktron Productions have staged a beautiful and beguiling production of Animal Farm at the Southern Theater. Ian Woolridge’s stage adaptation of the George Orwell classic is not a talky rendition of a politically philosophical novel, but a hard-hitting satire that moves briskly and harrowingly. The Orwellian metaphor of animals adapting the same power grabs and manipulations and men is dark comedy at its darkest. What if the flawed human tendency to enslave, control, and be unnecessarily cruel were built into all of nature itself?

The entire ensemble is highly physical, cleverly exaggerated, and impeccably timed. Regrettably the program does not list the characters the actors play. But you will see some extraordinary performances within this uniformly imaginative cast.

Home viewing of dvd’s has taken us away from experiencing great classic films on the big screen like they were meant to be experienceced. That’s why the Walker’s retrospective on Japanese filmmaker Nagisa Oshima is especially wonderful. He was nominated five times for the Cannes Film Festival Palm d’Or five times.

Oshima’s cinema often reflects the devastating breakdown in post-World War II Japan and how that translated on a human level.  It’s also bold in its expression of sexuality with his most famous, and to some, most infamous work, In the Realm of the Senses (1976) which plays Friday, Nov. 21 at 7:30 pm.

Gay themes and Iraq get thrashed out in Dying City.

OBIE Award-winning playwright Christopher Shinn contrasts straight soldier Craig and his twin gay actor brother, Peter. Craig is outraged when he discovers his bro still is sleeping with his dysfunctional ex, and freaks at the thought of the two men having sex. In this Bottling Company production, Ian Holcomb plays both roles. 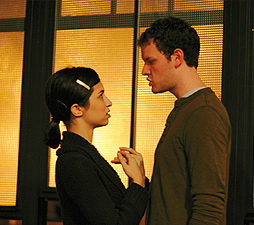 Baldwin explains, “When we have a significant loss, we can dive into other people to escape from one’s self—trying to find that person you’ve lost through somebody else.”

Catherine Johnson Justice plays Bone, whose online dating habit takes her down the self-destructive road of alcohol and sexual overload.

That said, Baldwin is no prude. Her plays remind us simply to understand for all its beauty, sex still has a negative charge that sometimes can get the ruthless upper hand.

That depiction is about not only female objectification, but also America’s obsession with winning. By bending gender with vaudevillian flair, Split Britches defies traditional theatrical narrative. This is a great opportunity to see radical theater in the spirit of the 1960s era of protest. The troupe is an important chapter in queer performing arts history.

Edgar Allen Poe’s story “The Masque of the Red Death” inspires innovative Sandbox Theatre’s new collaboration, The Horse, The Bird, The Monkey, & The Dancer. Protagonist Prince Prospero, who has undergone a gender-switch, is played by Katie Kaufmann, now Prospera.

Codirector Ryan Hill notes that the “uncommon friendships” Prospera makes on her journey are with “characters who represent conflicting aspects of her own personality. She befriends a dutiful, but overly obedient, horse; a helpful, frightened bird; a curious, undisciplined monkey; and a passionate, unambitious dancer. They’re the types of friends you find in Medieval morality plays, where big concepts like Fellowship are given a body, personality, and voice onstage.”

Lesbian playwright Paula Vogel won the 1998 Pulitzer Prize for her play about a sexually romantic relationship between a girl and a man in How I Learned to Drive, which is being revived by Theatre Unbound.

Vogel wrote the work because, as director Maggie Scanlan puts it, “Lolita, by Vladimir Nabokov, was her favorite book, and she wanted to tell the story from the girl’s point of view. I find it less a story of victimization and perversity than a love story—an unorthodox, and certainly not without its ghosts, love story—but a love story all the same. The woman has returned to her past in order to unravel the truth behind what, as a child and then a young adult, she couldn’t really process—a love that truly ‘dare not speak its name.’ As the play goes, both parties have affection and even love for each other, which differs from the obsessive tale of forbidden love and sex in Nabokov. Though admittedly inappropriate, in the play, the minor does receive valuable things—respect on some level, understanding, acceptance, and encouragement as well—from the adult.”