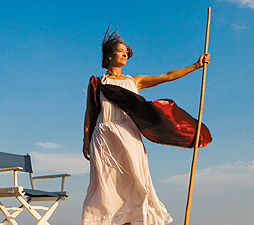 Jordan Harrison’s acclaimed play Amazons and Their Men is not actually about Leni Riefenstahl, who made beautiful propaganda films for the glory of Third Reich, but the parallels are clear. Hitler’s propagandist had to abandon a film project about Amazon Queen Penthesilea when Germany invaded Poland.

The character dubbed “The Frau,” played by Walking Shadow’s Zoe Benston, steers the action on a sound set in Germany in 1939, while a bloody war is happening just outside. Paradoxically, on the movie set, they’re fantasizing a romanticized version of the Trojan War. As events unfold, the fictional beautiful war is intruded on by the actual one.

Harrison says that Amazons’s gay characters are “very secretive. In the world of the play, their sexuality puts them in quite a bit of danger. But they’re filming this occasionally homoerotic sword-and-sandal movie, which seems to embolden the two male leads to act on their desires. There is an almost camp sensibility to the play’s ‘on camera’ scenes: outsized acting, daring duels, poisoned grapes, blonde equestrian vixens. The play is less about homophobia, and more about the responsibility of artists during wartime. In writing the play, I wanted to ask whether it’s the responsibility of artists to make work that reflects the world they live in. Can engagement sometimes be as dangerous as disengagement?”

Stage beauty and classical actress par excellence Stacia Rice once again is sinking her teeth into one of the juiciest roles ever written for a woman: Shakespeare’s most fearsome female creation, Lady Macbeth.

Rice explains, “It must have been a bitch to be a woman of Lady M’s time—especially difficult if you’re a woman with fire and ambition. Where’s your outlet? I think women in that time with such qualities did what they could to manifest their goals. They manipulated their men. And the best way—perhaps the only way—to do that was with sexuality and an oddly domineering maternal power. Certainly, Lady M is ravenously in love with her husband, but she’s also ravenously in love with the idea of getting to the throne.”

MCTC’s Theater Department is always receptive to challenging plays. And Terrence McNally’s 1995 Tony-winner Love! Valour! Compassion! is perhaps the edgiest choice yet. On an academic level, it’s clearly a nod to master playwright Anton Chekhov, but also it’s so totally gay. If you only know the play by the film version, you’ve missed the raw immediacy of how McNally’s situations play live.

Director Michael Robertson shares, “I’m excited about the casting, because we are using both racial and age diversity in this production, which certainly reflects upon the Twin Cities GLBT community. Both interracial gay relationships and intergenerational gay relationships will be reflected in these casting choices.”

Added sweetener: Kevin Iverson will be central to modern and classical dance that occurs in several scenes.

Defiance
Through Nov. 9
Park Square Theatre
20 W. 7th Place, St. Paul
(651) 291-7005
www.parksquaretheatre.org
Playwright John Patrick Shanley wowed us with Doubt, the first in his yet-unfinished trilogy of plays about American hierarchy. The second in that trio is Defiance, which plays Park Square. Set in 1971, it penetrates a shift from the old order in the United States military to a new one. Though race plays a part of this, it’s by no means the whole issue.

Director John Cranney observes part of the play’s conflict “is that the military is, in a sense, a world apart. It’s its own kind of society, and that’s on purpose. It serves a great need. When you put yourself in danger, you need to depend on the people around you. It is a way of life, and it’s regimented and organized that way.”

Cranney adds that we watch someone from the old-boy network not seeing what the world was like surrounding him.

Note: Going to Defiance will enrich viewing Doubt with Meryl Streep when it hits movie screens later this year.

The displaced and the disengaged take the stage in The Caretaker at the Guthrie. Harold Pinter’s innovative drama is no longer the unsettling event it was when it first played in 1960, but it’s nonetheless, a revealing document of a shift in British theater and social decay in post WorldWar II Brit society.

The play’s relative lack of structure and comparatively stagnant situations wieghed against the traditionally plot-driven structures of the day, are inescapable and well drawn in the Guthrie revival. Moreover, director Ben McGovern’s actors have explored their roles from our ’08 vantage point to gritty, socially class conscious effect. It becomes a powerful statement on relentless poverty, medical abuse, and the tyranny of the black market in post war societies. Post-Soviet Russia comes to mind as a contemporary parallel as does the gang culture of post-Reaganomics America. But in its own terms, this Caretaker reveals not only the alienation of the individual, but three misfits at the mercy of the post-war era, where so many traumatized souls still fell through the cracks of the Marshall Plan.

The actors could have opted for excess scenery chewing given the eccentric to weird nature of their characters but they raise the bar and give us an artful recreation of both a genre and an era. Steven Epp of Theatre de la Jeune Lune fame, is dazzlingly seedy and volatile as Davies the drifter, a working class victim of a culture where so many were displaced. Kris Nelson is touchingly understated as Aston, himself a victim of 1950s institutionalized pyschological engineering. Stephen Cartmell emanates electrically the methodical cruelty of a sharpwitted gangster, the type which takes tribalist control of situations when societies fall into disarray. Paradoxically, though all three characters are invevitably stuck in their own limited interpretations of what it is to be human, all three actors make us aware of the tragic dimension inherent in the three men’s inability and-or incapacity to communicate and hence, create.

Keating Economics: John McCain and the Making of a Financial Crisis
www.keatingeconomics.com

Barack Obama has been perhaps too much a gentleman for not making a bigger deal out of John McCain’s participation with the Keating Five. Like the other major scandal of the Reagan/Bush One era, Iran Contra, there’s surprisingly little ink on it. But of course there are whole bookcases in libraries and certain book stores when it comes to the scandals of Nixon and Clinton.

However, the Obama campaign’s sharply informative 15 minute documentary, free of charge online, is reliable and incisive as it puts forth the GOP Presidential nominee’s role in the affair back in the late 1980s and early ’90s. Federal Banking Regulator William Black Ph.D. narrates much of the short with details about the unprecedented $615 million fraud that involved Charles Keating’s violation of the direct investment rule that restricted how much savings & loan companies could own in the way of real estate as opposed to making loans on. There’s compelling footage of McCain, a U.S. Rep in 1990 being grilled by the colorful Okalahoma Senator Howell Heflin. The Alabama Democrat’s appearance is worth watching in and of itself. He reminds us that the American South actually has produced some formidably hard hitting liberals. In sum, a wonderful little film that fills in some important gaps in our general knowledge of relatively recent political wrongdoing.

Recall that James Cromwell played Charles Keating in the sexually charged 1996 film, The People Vs. Larry Flynt. He also plays George H. W. Bush, the father in the new film, W.
A Plague of Angels
Through Nov. 2
Theatre in the Round, 245 Cedar Ave., Mpls.
(612) 333-3010
www.tTheatreintheRound.org

Rugged individualism at the mercy of medical  self-righteousness unifies A Plague of Angels by Mark St. Germain. Jean Salo is fire and steel as Mary Mallon, better known as ‘Typhoid Mary’, an Irish immigrant who worked as a cook in the New York City area a century ago and unwittingly infected many people with typhoid fever. It’s a classic portrayal of denial, both in the crisp writing and in Salo’s fine performance.

Jenifer Reed Anderson is equally riveting as Dr. Ann Saltzer, who coldly weighs Mallon’s personal freedom against public health’s greater collective good. Yet we find she also has an axe to grind. Director Janice Stone’s tight ensemble mines the anguish while keeping the pace brisk and compelling. St. Germain reminds us about public ignorance at the turn of the 19th century about germs being a major cause of disease. It oddly parallels certain attitudes today that assert that climate change is a myth. There’s also food for thought about what happens when we individually and collectively stigmatize others for whatever reason. Think of how AIDS sufferers have been stigmatized.