The Guthrie’s Little House on the Prairie is an absolutely glorious homage to Rodgers and Hammerstein, Aaron Copland, and “Americana.” Rachel Portman’s music and Donna di Novelli’s lyrics, along with Francesca Zambello’s direction, capture the expansive spirit of 19th-Century America, once regaled in Hollywood and on Broadway, which vanished after Vietnam and Watergate. 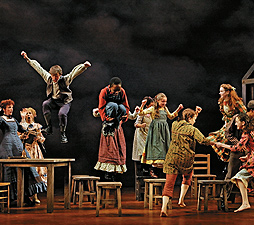 It was not the ugly, dark specter of American imperialism, but the idea of the liberated human spirit conquering negativity—the American spirit of hope that freed the slaves, gave women the vote, and demanded the New Deal—which was a core American belief before the nihilism of the past half-century took root. Rachel Sheinkin’s script, based on Laura Ingalls Wilder’s books, puts girlpower front and center. Kara Lindsay’s lead performance is magnificent.

For those who argue that the genocide of the Indians invalidates Wilder’s view, I respectfully disagree. That’s another play I hope some major theater will take on. Sources like the Blackfeet oral histories, Duane Schultz’s Over the Earth I Come, and other works remind us that’s a whole other dimension to be explored.

Director Steven J. Meerdink says, “This means the other characters exist almost entirely from Jamie’s point of view. This is quite unusual for a musical, and it creates some interesting dynamics. The characters representing his disconnected downward spiral—his partying cohorts and ex-wife—are depicted as shallow and one-dimensional, while those who could redeem him—his brother, mother, and a potential love interest—are seen with much more humanity. The ‘Jamie-centered’ concept melded together with a music-video feel from the 1980s provides for some drug-induced hallucinations in the form of Jamie’s flowing memories, as well as a missing girl from a milk carton and the headline-grabbing tune ‘Coma Baby.’”

You be the judge of whether A Life in the Theater has homoerotic overtones. Indeed, plays by David Mamet often seem to emanate some of that. The Jungle’s sublime revival of love-hate professional relationship between a young actor and an aging one sometimes makes you wonder. Moreover, this particular revival mines more dark wit and despondency than its two previous Jungle stagings. Bain Boehlke, who plays the older John, and who also directs this production, fleshes out the existential terror of a man desperately grasping to control his unfolding deterioration. Robin Everson endears as ambitious young Robert, yet makes us question his capacity for empathy, which Mamet holds as paramount.

The Tiny Jumbo Jolly Grim Show
Oct. 24
Beakman LIVE!
Oct. 25
In the Heart of the Beast Puppet and Mask Theater
1500 E. Lake St., Mpls.
(612) 721-2535
www.hotbt.org
Paul Zaloom and Lynn Jeffries are presenting an adult puppet show, a kid-friendly one, and workshops at the region’s preeminent puppet and mask theater.

Of The Tiny Jumbo Jolly Grim Show, Zaloom remarks. “My Punch and Jimmy Show is a queer adaptation of the traditional Punch and Judy hand-puppet show, a rowdy and ribald 450-year-old morality play that was performed by itinerant puppeteers to largely adult audiences. In my show, the older, pugnacious cad, Punch, lives with his young, buff, and shallow boyfriend, Jimmy, and their little adopted baby, Precious. Punch is an old-school ’60s firebrand, and Jimmy is a Log Cabin Republican, which Punch considers to be oxymoronic—with an emphasis on the moronic. Punch deals with the LAPD, the executioner, Death, and the Devil himself, all of whom wish to destroy him for specious reasons. Of course, our little hero, Punch, triumphs over them all, but is finally outdone by his outsized libido and untamable desires.”

Congratulations Red Eye Theater for your 25th Anniversary! And congratulations on your lovely new production of Amanda Tears, Teenage Detective by Gregory S. Moss. Director Steve Busa has elicited the shimmering strangeness and beauty of this quirky tale of a high school heroine played by the darling Amelia English, investigating the disappearance of her best friend. Though you may think it has something to do with human trafficking, it ends up being of a mystical nature. It’s a mystical sensibility that seems to be making itself in Red Eye’s aesthetic recently. Nothing wrong with that. There’s also a delightful drag turn by Nick Crandall as a macho gangbanger who yearns to wear a wedding dress.