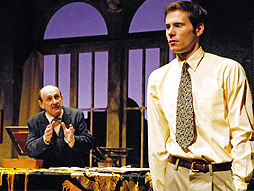 Theatre Latte Da Artistic Director Peter Rothstein, who has staged the show at Guthrie’s Dowling Studio, calls it a “song about healing, liberation, redemption. Set in Vienna in 1986 on the election of Kurt Waldheim, a former Nazi, this play by Jon Maran is about the friendship between two men: Josef [Raye Birk], an old Viennese voice teacher, and Stephen Hoffman [Jonas Goslow], a young American piano student. I found it incredibly witty, profound—and, of course, musical.”

Sean Cercone’s staging of Swing! bursts with robust sensuality and Big Band stylishness that oozes the feel of a ritzy nightclub circa World War II. Kate Margaret and Fred Steele spark a tingling chemistry in the beguilingly funny “Bli-Blip”—given Chan’s mainstream audience, it was great to see this interracial number delight the crowd. Alison Solomon’s choreography is sexy ’40s glamorama, flickering brightly with ensemble precision. George Maurer’s swing band is perfection. Only one nitpick: Songs about Harlem are served more convincingly by a nonwhite singer.

We stand by aghast at the bankruptcy of Lehman Brothers; the bailout of Fannie Mae and Freddie Mac; and the takeover of Bear Sterns by JP Morgan Chase. So, consider Power, by Nick Dear.

Director Lynn Musgrave says it’s “about the irresistible attraction of power, often for its own sake, at the expense of everything else. France in 1661 was bankrupt, while capitalism thrived. The haves acted with impunity, while the have-nots either struggled for their very existence, or depended upon those with money to ‘lend’ at an exorbitant and uncontrolled interest.”

Power considers what happens when an obsessively religious accountant also is obsessed with taxation. Will you as audience member accept his narrow interpretation of the law, and subsequent pious conversion of the King? What if this cost-cutting were to set up the questionable imprisonment of a benefactor of arts, engineering, and science? What has this to say about the free-market mania of our own neocon era?

Director Mary Finnerty notes, “Wasserstein offers us the best of well-made plays, like You Can’t Take It With You, seasoned with the wit and self-deprecation of a Woody Allen film.”

Wasserstein, true to form, looks into the problem of a woman in love with a bi guy.

The piece examines, in Sherman’s words, “how victim and aggressor become forever linked by their shared violent experience, an event to which they are both witnesses. By subtracting violent action, and focusing instead on the social experience of personal trauma, copperhead probes the ways in which coercion requires intimacy, physical assault confronts our common anatomy, and violent exchange is a transmission of more than action—also feeling, intent, and state of mind.”

Touch, by Toni Press-Coffman, probes the psychological aftermath of rape and murder.

Director Paul Von Stoetzel points out that the rape reminds surviving loved ones of “the horror that a loved one endured.”

Regarding sex-worker-character Kathleen [Mykel Pennington], Von Stoetzel remarks, “She illustrates how women are not just commodified by their bodies, but how commonplace it is. She epitomizes the strong woman, as she recognizes and is completely aware of men’s weaknesses when confronted by stark sexuality. Sex—pure sex—with no contrivances around it is what she embodies, and it scares men.”