Playwright Matthew A. Everett’s latest, Leave, is his “gays in the military” play. Homophobic military culture mandates that a young Marine, Seth (Nick James Parker), and his civilian husband, Nicholas (Tim Schmidt), must use code words and secret identities for cover. Their path is crossed by Tyson (Bennett Smith), a former soldier who rejected Don’t Ask, Don’t Tell, and Jonas (Alex Carlson), another gay Marine. 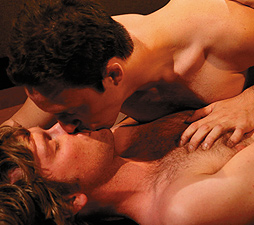 While researching, director Justin Latt, who watched videos of soldiers leaving for and returning from war, was struck by how “our gay service members are not allowed public displays of emotion. The demands of their service are compounded by their need for secrecy.”

Latt thinks that Everett’s hard look at posttraumatic stress “is different than anything else I’ve seen.”

As Latt adds, “These gay marines have someone worth fighting for, worth dying for. It just happens to be a man.”

Fences
Through Sept. 21
Penumbra Theatre
270 N. Kent St., St. Paul
(651) 224-3180
www.penumbratheatre.org
Penumbra Theatre’s revival of August Wilson’s Fences is one of the most tightly acted productions of recent years. Director Lou Bellamy’s electrifying cast and C. Lance Brockman’s viscerally naturalistic set capture the gritty distress of a 1950s African-American working-class family. James A. Williams rivets as ruthless, hard-ass Troy Maxson, the embittered sanitation worker who can’t get over his thwarted heyday as a Negro Leagues baseball player. His failure impels him blindly to sabotage the athletic success of his son, Cory (James Alfred). Out of all this, Troy’s psychosexual and sexism issues surface, proving, yet again, Wilson’s numinous insight into the often twisted psychology of machismo, no matter what color.

Wellstone! is being revived for election season. He and his wife, Sheila, died in a plane crash in Northern Minnesota just days before the 2002 election, which he was expected to win.

Playwright and lead actor Mark Rosenwinkel doesn’t evade the controversy around the late Senator’s support of the Defense of Marriage Act (DOMA).

Rosenwinkel says, “Paul and Sheila Wellstone had a very traditional marriage, conservative even, with Sheila practically babying him—putting milk in his cereal in the morning, laying out his clothes on his bed, etc. Because of this, some of his associates felt that, despite his strong stand on human rights, he was personally uncomfortable with the idea of same-sex marriage. With the reaction of his many GLBT supporters, including his own staff members, being so immediate and negative, DOMA became the one vote he later said he regretted. He also admitted to mishandling the announcement of his decision on a talk radio show, without having informed his aides or leaders in the GLBT community.”

Nonetheless, Wellstone rightly is held as a historic ally for queer equality.

The IVEY Awards for superior achievement in Twin Cities theater have been very open to queer content and artistry since they began four years ago. This is significant, given that the event has become the principal annual local celebration for the art form. Indeed, nationally, our local theater scene typically is noted to be second only to New York. Yes, we rival and surpass, in the eyes of many, theater in Los Angeles and Chicago. Remember that Minneapolis has had a record of three Tony Award-winning regional theaters. This year’s IVEY special guest host is the lovely Melissa Gilbert, who also appears in the Guthrie’s magnificent Little House on the Prairie.

Bisexual 1932 Olympic gold medalist Babe Didrikson Zaharias is celebrated in Andrea Jill Higgins and Carolyn Gage’s new musical. Folksinger Ellis plays the title role of the woman who went on to excel in golf, and win the US Women’s Open 16 years later. Gage also penned The Second Coming of Joan of Arc and The Anastasia Trials in the Court of Women. She is one of the most hard-hitting playwrights of queer issues ever. It will be interesting to see how she handles Babe’s eventful life.