On the Record: Erasure, Feist, Tori Amos, and Dessa 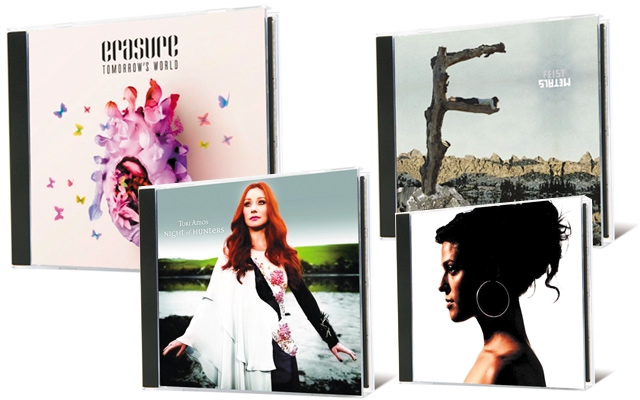 Erasure seems to have to been on the scene for millennia (OK, technically they have, but that’s not my point), unleashing synth-based hit after hit for more than 25 years. Their latest is a short and fairly sharp release, skipping over the filler that usually packs dance-pop albums for a strong nine-song, 32-minute set. Alan Bell has one of the most distinct voices in the snyth-pop world and he uses it to full effect throughout here. Perhaps as a way to showcase their august position in the scene, Vince Clarke builds the beats and tunes using plenty of vintage equipment, which gives the whole album a richness missing from most modern dance releases. It’s not pushing new ground, but fans will find plenty to love here.

I could make all kinds of counting jokes about Feist’s fourth album, but space is limited. I will say that is more than a worthy follow up to her smash The Reminder, building on that album’s solid foundation and exploring fresh sounds throughout. The Canadian singer-songwriter moves out into new territory for her, building songs – like Bjork or Tori Amos – that rely as much on the dark mood of the sounds as anything she sings. Current single “How Come You Never Go There” rides a gentler musical path than many of the others here (there’s even a bit of banjo in the background), which does a nice job of tempering the mood in the face of the likes of “Graveyard” or “Cicadas and Gulls.”

Queen Tori goes full classical on her Deutsche Grammophon debut, building a dynamic set of new tunes out of variations on pieces by Bach, Chopin, Debussy and Shubert.  This being an Amos album, there’s also a concept running through all of the tunes – of the hunter and the hunted and their comingled existence. Part of what makes the collection so breathtaking is the musical approach. Amos fully strips away the rock sound here, leaving us mainly with just her (often untreated) voice and piano, only occasionally being joined by strings or woodwinds (and her daughter, Natashya) for the songs. At times in the past, her gifts have been buried in the mix, but here they are clear as a bright, sunny day.

Not a new album per se, but a collection of recorded tunes with a teaser for her real follow up to A Badly Broken Code, due early next year. Then again, anything new from this Doomtree member is welcome. The first 10 cuts (culled from her debut ep and lp) sport arrangements built for a live tour and showcase a terrific, low-key and sparse musical approach that only heightens the impact of tunes like “Dixon’s Girl” and “Kites.” The new song, “The Beekeeper,” is stunning on its own. Dessa builds a tremendous, epic story in the course of four minutes, using the musical lessons she learned from working with the live band. This is the essential download here, but the rest is worth its price.