While Justin Bieber and the cast of Glee’s endless cover tunes fight it out for teen-pop supremacy on the Hot 100 charts, Lady Gaga puts them all to shame with her fast-rising latest single, “Born This Way.” As an attempt at a dance-floor-packing new gay anthem, it works pretty well. Oh, sure, it sounds a hell of a lot like Madonna—and I’m not sure if “don’t be a drag, be a queen” really is as fist-pumping a slogan as Lady Gaga thinks it is—but the song bounces along with plenty of dance energy. Though it’s pretty mechanical, going the Madonna route means a little more humanity is here than in a lot of recent pop songs. Then again, Lady Gaga is as much an ongoing piece of performance art as a chart-topping musician, so the entire song’s whole “emerging from the egg” version at the Grammys (shades of Spinal Tap there) really may be its lasting legacy. 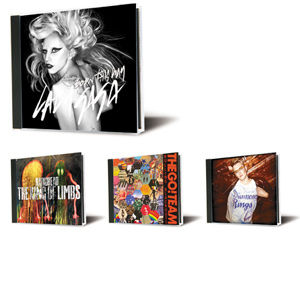 The King of Limbs
Radiohead

Over the past few years, Radiohead has become well-known for its mode of releasing music as much as their albums. On the heels of 2007’s pay-what-you-can In Rainbows comes The King of Limbs. It can be purchased via the band’s website for $9 for the basic audio files, or more for a physical copy—which won’t be out until the end of March in a normal edition, or May in a deluxe version. Meanwhile, the eight songs here continue the later-period, angst-ridden, dark-rock music that Radiohead has employed in the years following its experimental Kid A/Amnesiac era. It isn’t the most accessible set of songs you’ll hear this year, as the band often employs lots of dense electronic layers, loop effects, and other distortions to keep the listener off-kilter. Thom Yorke remains a maudlin soul, whispering and moaning his way in the front of the mix, leaving the listener feeling claustrophobic—in other words, typical Radiohead.

The third album from the Brighton sextet explodes in the opening seconds of “T.O.R.N.A.D.O.” as a cheerleader-like chant fuels a quick two-minute dance stomp. It’s a perfect introduction for the band’s bright collection of fuzzy, dance-crazed noise, with distorted guitars, big beats, and jolly vocals from beginning to end. The Go! Team freely blends and bends genre to their pleasure, such as on “Apollo Throwdown,” where hip-hop meets pop, all with a beat that would not sound out of place on a classic Tom Tom Club release. That immediately is followed by the Motown-like drive of “Ready to Go Steady.” Then comes “Bust-Out Brigade,” which sounds like the lost theme to some funky 1970s cop show. These disparate styles could become exhausting, but the band’s good cheer and excellent chops give it the consistency needed to engage the listener from beginning to end. Lots of pop music wants you to feel good. The Go! Team actually makes you feel good.
Special Affections
Diamond Rings

This one-man band impressed audiences during his recent opening slot for Robyn, and his debut album showcases that same potential. The brainchild of Canadian indie rocker John O’Regan, Diamond Rings features synth-heavy rock fueled by his smoky baritone, and a driving darkness that would not be out of place on albums by The Cure or Depeche Mode. That comes through lyrically as well, with lots of mentions of dying forests, hard times, falling out of love, and a three-wheeled hearse (he did start writing the songs while suffering from Crohn’s Disease). Despite it all, this isn’t a maudlin record. Instead, it seems to be full of the chilly winter energy of O’Regan’s native Toronto, where the long dark nights can get you down, but also provide the fuel for musical thrills. You may feel a bit depressed listening to Special Affections, but you usually can dance to it—and that can count for a lot on a long winter night.