Adele fights against the sophomore slump—and the dreaded “Best New Artist” Grammy—with a smoldering collection of tunes that belies her age (despite the title, she is actually 22). These songs look at love—finding it, losing it, fighting against it—through the mind of a young woman just crossing over from her teenage years. It means a lot of yearning here that sometimes doesn’t feel as sophisticated as the music or the delivery, but she does showcase musical maturity beyond her years. Opening ‘”kiss-off” track “Rolling in the Deep” sets the mood well, as a dark, country-style song provides a perfect backdrop for Adele’s strong, clear (oh so nice to hear a song without electronic treatment) voice. At times, the album slips a bit too far into the mellow, unleashing a string of sound-alike slow-tempo numbers around the middle. And the bluesy riff on The Cure’s “Lovesong” probably should have been left as a B-side. 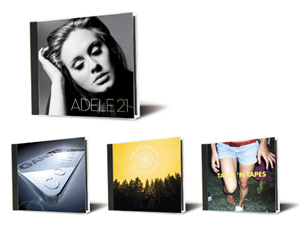 As post-punk pioneers, Gang of Four fused angry guitars with heavy beats, essentially setting the stage—for good and bad—for the likes of Bloc Party and Franz Ferdinand two decades later. So, it’s no surprise that the band would want to get back into the action. Content features some of the thrills that marked early classics like “Anthrax,” “At Home He Feels Like a Tourist,” and “Damaged Goods.” But on the whole, it feels much more like their later, less-realized, albums, such as 1995’s Shinkwrapped. Some good stuff is here, especially on the front half, where songs like “Who Am I” and “You’ll Never Pay for the Farm” bring out skittering guitars, bouncing bass lines, and Jon King’s acerbic vocals. Still, it doesn’t take long for the album—like the latest release from post-punk contemporaries Wire—to wear out its welcome, relying too much on music that lacks Gang of Four’s original fire and wit.

The King is Dead
The Decemberists

After the polarizing epic The Hazards of Love, the Decemberists return to earth with a simpler, country-fied release. The approach has led to commercial success—a Number 1 album! More importantly, it makes for really satisfying listening. While Colin Meloy’s tangled storytelling has given way to more straightforward songs, the band’s musical approach has tightened. The tinges of country are not far from the rocking folk they always have employed. Helping the vibe are a pair of ringer guests—singer Gillian Welch and R.E.M. guitarist Peter Buck—who lend their talents to the first single, “Down by the Water” (alas, not the P.J. Harvey tune, but a good song nonetheless). Welch’s world-weary backing vocals add depth, while Buck’s guitar evokes the classic mid-’80s sound of his longtime band. Never outstaying its welcome, The King is Dead is perfect music for late-night driving on a long road trip.

Oh, the dangers of being a buzz band! These locals set the indie world abuzz with their 2006 debut The Loon, but found diminishing returns as the years went on. Their third album, Outside, probably isn’t going to change that perception. Tapes ’n Tapes strives to find the easy-sounding indie-rock of their debut, but often come off as if they are trying way too hard. The band’s bouncy indie-pop certainly can be appealing, and some moments evoke their debut, such as the driving “Nightfall” or “Desert Plane,” which give the album a strong middle. But on tunes like Vampire Weekend sound-alike “One in the World” or the dry swing of “Hidee Ho,” the album really stumbles by being too eclectic for its own good. Outside is not a terrible album by any stretch of the imagination, but just is missing the fire to make it rise above the current crop of similar-sounding releases.