“On Golden Pond” Glistens with Golden Performances at the Jungle 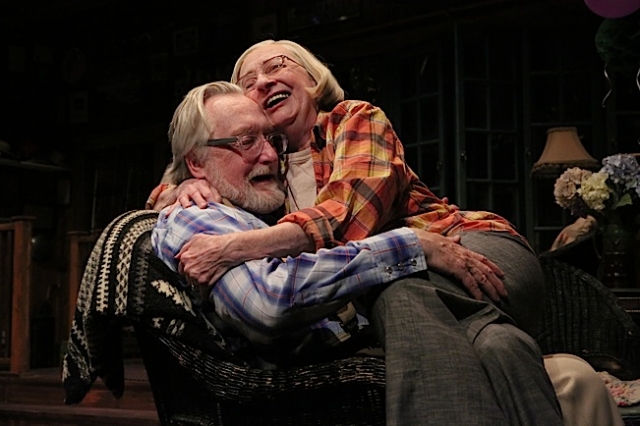 Few plays are as militant about letting bygones be bygones as On Golden Pond. An elderly couple, Norman and Ethel Thayer, spend summers at their New England cabin on Golden Pond as a way of escaping the changing world around them. It’s a common desire, if not a fantasy, that many people have: returning to nature in their “golden years”. Playwright Ernest Thompson’s strongest element is the play’s inherent love of nature, which shines through in the current Jungle Theater production. You can see the lake outside the big upstage window of Bain Boehlke’s fabulous north woods lodge-style set and it makes you want to go right up there and wade right into it.

The play’s conflict centers on Chelsea, the Thayers’ adult daughter. She and Norman have some bone to pick about his mean-spiritedness toward her when she was a girl but Thompson never sufficiently fleshes it out. Thanks to Jennifer Blagen’s vibrant performance, Chelsea is someone we nonetheless have feeling for.

Boehlke has not only designed the set but he has also directed the production and portrays Norman. It’s clearly a labor of love and he shapes a far more likable Norman than Henry Fonda’s overrated, albeit Oscar-winning film performance. At the dawn of the Reagan era, when the film was released, the American public saw aging male crotchetiness as charming, unlike our own era of elder anger machines such as Dick Cheney and John McCain. Even if you happen to agree with their politics, you still can’t help but wince. Happily, Boehlke reminds us that it’s possible for curmudgeons to still be lovable as opposed to monstrous.

Wendy Lehr’s Ethel is also a vast improvement over Katherine Hepburn’s Oscar-winning portrayal.* In the film, Ethel is a protoypically enabling matriarch, incessantly protecting her man from emotional truths and scolding daughter Chelsea for (naturally) wanting closure. In that sense, the role is annoyingly typical of women of Tom Brokaw’s questionably dubbed Greatest Generation. But Lehr miraculously avoids the enabling element, giving the role a kind of energized serenity. Yet again, another superb Wendy Lehr performance.

Michael Booth is touchingly vulnerable as Chelsea’s significant other. E. J. Subkoviak is gritty and sweet as the mailman who dated Chelsea long ago. And Peder Lindell is splendid as a young boy who enters the Thayers’ far too settled world, bringing them an understanding of how the world is changing. And that change can often be good.

*Hepburn won the Oscar over Diane Keaton whose brilliant and superior portrayal as Louise Bryant in Reds defied traditional women’s roles in many remarkable ways and also covered a far broader emotional and intellectual range than Ethel Thayer. Some have also felt that Jane Fonda playing the role of the defiant “bad girl” Chelsea, was a way of the film appealing to conservatives who like their gender and family roles strictly codified, not to mention seeing Hanoi Jane humbled.