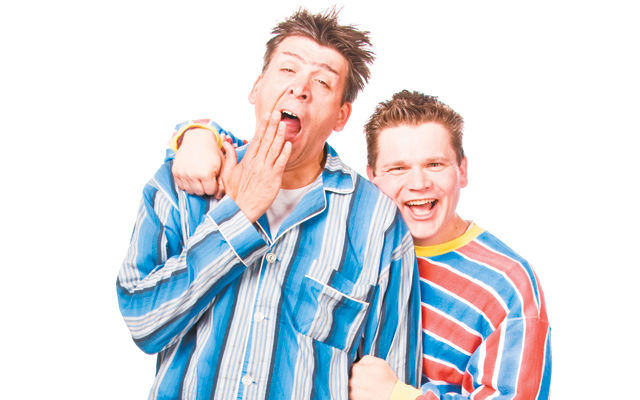 Bradley Greenwald is one of the most acclaimed and popular Twin Cities-based actors. Though he is noted for his classical and operatic vocals he wasn’t even exposed to that dimension of music until he was an adult. Moreover, Greenwald didn’t start acting as an adult until age 35. And that wasn’t a supporting musical role. It was the epic non-musical lead  in Harvey Fierstein’s Torch Song Trilogy at the Jungle Theater. However, you can see him in a major musical role as Fagin in Theater Latté Da and Hennepin Theatre Trust’s Broadway Reimagined production of Lionel Bart’s Oliver!As a youth, Greenwald was involved with band and Civic Summer Theater in his hometown of Fairmont, Minnesota. Classical music and opera were totally out of his sphere. As an undergraduate at the University of Minnesota–Twin Cities, he was not a music major but a German major with aspirations to teach. In his sophomore year he took voice lessons with Barbra Kiereg who introduced him to German classical music: Schubert, Schumann, Wolf. This led to singing in Vern Sutton’s esteemed Opera Workshop. Greenwald remarks “I thought, This is opera? This is great!” In 1989, the student took what he thought would be just time off from the U of M to join Minnesota Opera’s tour of Puccini’s Madame Butterfly which led to roles in Britten’s A Midsummer Night’s Dream and Larsen’s Frankenstein. On the opera’s 1991 tour of Mozart’s The Magic Flute, Greenwald met future husband, tech crew member John Novak. He says they were married “in spirit in 1991; in the eyes of the State of Minnesota, on our 23rd anniversary, September 22, 2014, in our garden.” When asked about how they keep their relationship strong, he says, “That’s a skill set. After 23 years, still learning it, always will be.” 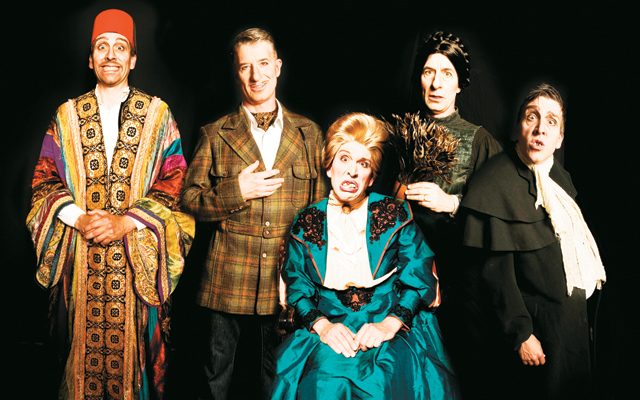 Greenwald and Steven Epp in The Mystery of Irma Vep; photo by Ann Marsden.

After the tour, the career stream began to flow for concerts, music-theater, and workshops, Greenwald didn’t return to the U, which made for a shift of awareness, meaning he had to, as he says, “develop quite a big bag of skills. Styles, for example: the differences in singing Baroque, Mozart, musical theater, and commercial jingles are specific skills, and if you’re fluent in switching among them, versatility would open up more work opportunities. I could already sight-sing, which means read a piece of music cold without the need of being taught the part beforehand. And this probably got me a lot of work in the beginning. I lied about certain things, like I could speak French dialogue, I could dance, I could do an Elvis impersonation. When I’d get the job, I’d scramble to learn how to do it before the contract started.”

The segue into Greenwald’s acting career seems to have happened with Theatre de la Jeune Lune’s 1994 mash-up of the Molière comedy and Mozart opera, Don Juan Giovanni. Innovative Jeune Lune was unique as both a world-class theater and avant-garde opera center. Greenwald seemed destined for theatrical expansion. At a gathering at Jungle Theater Artistic Director Bain Boehlke’s house, the host said that Greenwald should play the lead in the three-and-a-half hour Torch Song Trilogy, which by then had become a classic in both contemporary American and gay drama. 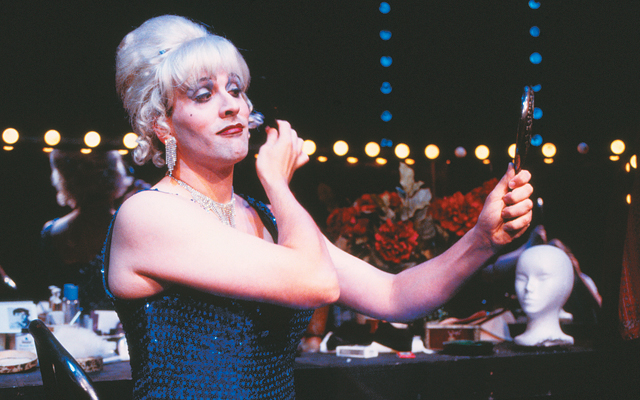 Greenwald says that Torch Song was “the most overwhelming job I’d ever had. I didn’t think I was right for it! Previously, my text had always had a musical partner which which provided emotional content, phrasing, and style, not only to use but work against. But with a play there’s no music. The music (in a straight play) is in the language and I didn’t know how to access that.” Nonetheless, the 2001 production was a hit with critics and audiences, alike. Greenwald, like many Jungle actors, attributes his success to Boehlke’s inspiration.

One could say that the rest is Twin Cities theater history. At the Jungle, Greenwald would go on to do two runs of Charles Ludlam’s multi-character The Mystery of Irma Vep, but his triumph, which Lavender named the best performance of the 2000s’ first decade, was two runs staged by Joel Sass of Doug Wright’s I Am My Own Wife, the solo bio-drama of the life of transgender German Charlotte von Mahlsdorf.

In bold contrast, he delighted audiences at the Children’s Theatre with the Sesame Street-inspired Bert & Ernie, Goodnight! in 2009. CTC Artistic Director Peter Brosius shares, “Whether it is creating a tender, touchingly and hilariously exasperated Bert to Reed Sigmund’s Ernie or insisting on not being a narrator but rather being on stage in the middle of the action reliving each moment of his life with increasing joy and accelerating anxiety in A Christmas Story or inventing the greatest crow ever to preen and caw on any stage in The Snow Queen, Bradley brings such grace, intelligence, and wit to a rehearsal room and a stage. He is a mad joy to work with, smart as hell, generous, fierce, demanding, open, and playful all at once. He brings out the best in all of us: directors, actors, and audience. The warmth pours out of him, that gorgeous voice and his sly and dangerous wit are all nothing short of extraordinary.” 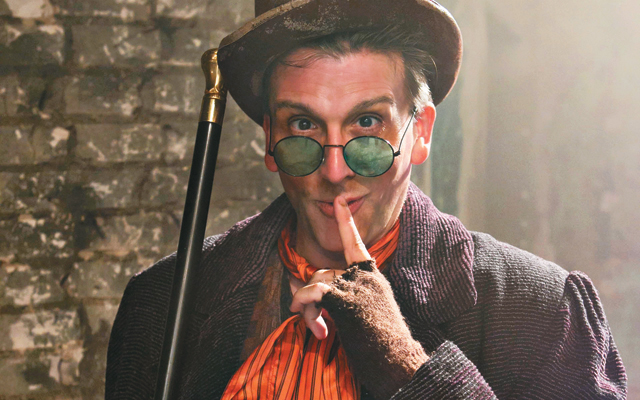 Greenwald as Fagin in Oliver! Photo by Heidi Bohnenkamp, 2014

Another terrific portrayal was the iconic Emcee in Frank Theatre’s terrific 2011 staging of Ebb & Kander’s Cabaret. Director Wendy Knox: says, “Working with Bradley is a treat. He’s so smart and he keeps an eye on the overall production and offers ideas and comments to make things better, helping to push the whole thing to be the best it can be. Plus an added bonus—for me—he’s very funny and can be very naughty.”

Cabaret and Oliver! are musical stalwarts with critical reflections of their societies. In the latter, Greenwald plays Fagin, who runs a theft ring of desperately poor boys in Dickens’s London. He observes that “Fagin is a mother to those boys in his own way, but they can never provide him with the really substantial hauls that (adult) Bill Sykes can bring in. These big hauls are complicated with violent behavior and cruel self-preservation.” Clearly, this comment shows Greenwald as a sharp observer of text and human nature. Oliver! director Peter Rothstein says, “Bradley is the ideal artist to have in the rehearsal room. He is incredibly versatile as an actor and singer, but he also has a theatrical mind bursting with creativity. Bradley possesses a profound understanding of the theatrical event.”