The legendary Minneapolis GLBT establishment known as the eagleBOLTbar continues to stand tall as it approaches its 21st birthday. 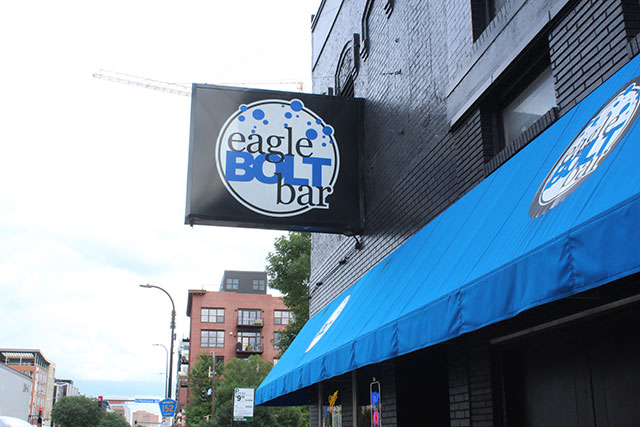 How apropos is it that one of the Twin Cities’ longest-lived and venerable gay nightclubs is officially old enough to buy a drink?

The beloved eagleBOLTbar, a neighborhood bar & grill and gay bar located in the East Town section of downtown Minneapolis, has certainly earned that drink, and ever since owner and proprietor Edward Hopkins opened what was originally called the Minneapolis Eagle on Sept. 8, 1998, the club has been a respected pillar in the Twin Cities gay scene.

“I purchased the previous business by making a down payment with a small inheritance from my parents who had passed a few years before,” said Hopkins. “The leather community had gotten wind of our opening and had scoped the space out prior to our official opening. The first night was very exciting and also terrifying. I remember going home and crawling into a fetal position and wondering what had I gotten myself into.”

Those opening night jitters were proven wrong, however, as the Eagle became a popular destination for leather events, dance nights, football viewing parties, and show tune Sundays. In 2002, Hopkins purchased the dilapidated building next door, eventually reopening it as a video bar the next year.

“The roof had caved in from the weight of snow, and the wooden floors were so severely buckled that you could not drive a tractor over them,” Hopkins recounted. “We referred to the first building as ‘The Eagle’ and the new building as ‘The Bolt’. We attempted to continue to enforce a dress code in one space, but after a few years decided it was easier to combine everything and be known as eagleBOLTbar.”

Hopkins said that the establishment was a resounding success right out of the gate, with patrons taking to the fun theme nights and proximity to sports venues.

“The Eagle started 3 for 1 when our community was not really gathering for happy hours,” said Hopkins. “It took off immediately. In the same respect, our weekly beer bust was immediately successful. People love our version of Showtune Sundays. Being near to the new US Bank Stadium, we have some very busy unexpected days.  Our current standout feature is our new, large patio with comfortable seating and great landscaping.”

The eagleBOLTbar is host to a kitchen open daily for lunch and dinner, and brunch on Sundays, while visitors can come on down for activities ranging from karaoke and pull tabs to drinking on the patio and breaking out the leather and rubber gear for monthly theme events. Most importantly, eagleBOLTbar is a frequent contributor to numerous charitable causes.

“[We] participate in Dining Out for Life as a 100 percent donor since our first year, we contribute to cancer organizations (after losing several family members to cancer), and we are a proud sponsor of gay athletics,” said Hopkins. “We support several softball teams and the kickball league. We reserve Saturday evenings from 7 to 10 p.m. for any group who wishes to hold a charitable event in our space.”

Looking back at 21 years of running the eagleBOLTbar, Hopkins expressed both pride and amazement at the many patrons, employees, and events that have been in the space.

No matter what’s happening in the building, it’s always a hot time at eagleBOLTbar, and no matter the day, month, or year, it’ll always have a place in the Twin Cities’ rainbow community’s heart.

“People may settle down or move away and new people may frequent our little bar, but our customers always seem to feel at home,” said Hopkins.