Ten years ago, there was no reason to pull off the highway as you barreled down I-94, heading for the bright lights of Madison or Milwaukee. Today, folks in the know from those Wisconsin cities are heading west to where the action is… and that’s Eau Claire. 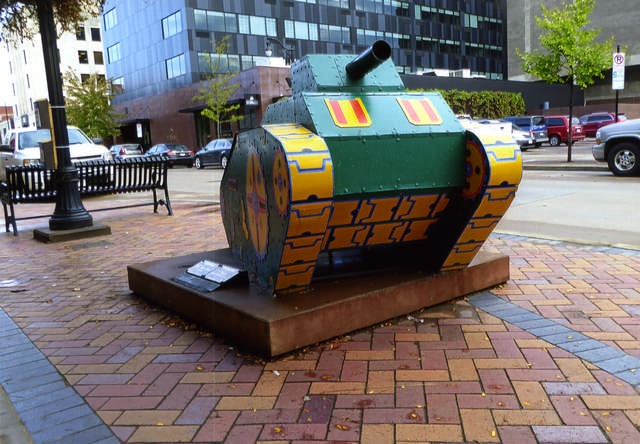 A star of the Public Sculpture Walk in Eau Claire.

Oh, sure—back in the day, the city’s graduates left town before the ink on their diplomas was yet dry, lured by the artsy vibe of Austin or Portland to secure their rep as hipsters. Today, the same folks are moving back to Eau Claire to ride the wave of its new-born creative spirit. It’s catnip for artists of all flavors. And that’s no accident.

“Today it’s a disruptive town. ‘Alternative’ is positive,” declares Greg Johnson, one of a triumvirate of visionary entrepreneurs who helped turn the downward spiral around. They eavesdropped on the plight of Mayo, which operates a clinic here, and Janf Software; both had trouble attracting smart new hires with nothing to do outside the cubicle but snooze. 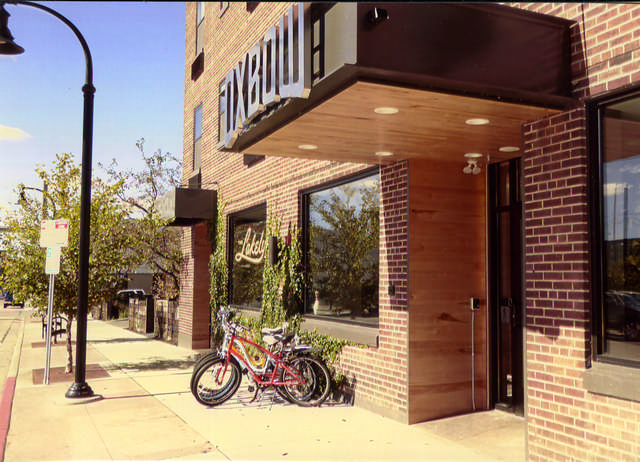 Oxbow Hotel is Eau Claire’s hipster central, with live music in the bar, and LPs and phonographs in the rooms.

Artisan Forge was the first wake-up call. Greg launched the collective in a former trucking facility in order to pull lonely, isolated artists together in collaborative studios. Today it’s a petri dish of talent that has ramped up cultural attractions throughout the town. Classes are offered in everything from pottery to glassblowing. (“We discovered there were 40 glassblowers in town. Who knew?” reports artist Ed Dubick and wife Kendra, who relocated here.) Also popular is a Women in Welding class. The building includes a sales gallery, performance space (steampunk to torch-bearing dancers) and, soon, more in-demand studios and a coffeehouse. 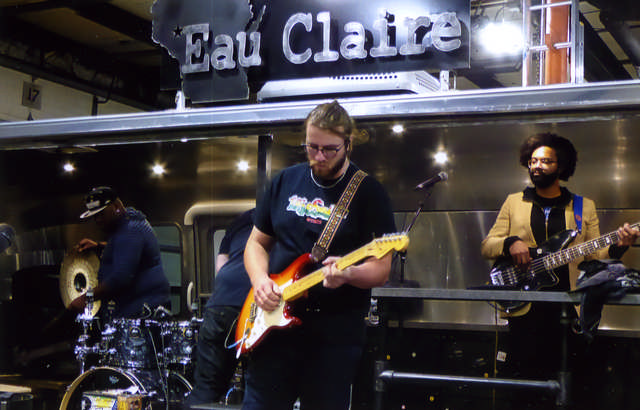 Nick Meyer also signed on to make things happen. He publishes Volume One, the city’s arts/entertainment paper, with offices above a store he fittingly named The Local, source of all things witty and Wisconsin. Recently, Nick converted a ho-hum hostelry into the snazzy Oxbow Hotel, a hipster’s haven tricked out with art gallery, restaurant, and bar with live local jazz. Every guest room features a record player, with a cache of vinyl LPs.

That record collection was curated by the third man instrumental in the turnaround, local musician Justin Vernon, frontman for Bon Iver. He’s a major player in Eau Claire’s six huge annual music festivals (including the largest jazz festival outside of New Orleans), with upwards of 20,000 in attendance. It doesn’t hurt to have the UW-Eau Claire’s strong music department in cahoots. (The school sports five jazz bands, a polka band and a harp choir. As they say, “Alternative is positive.”) The U is collaborating with city, state and private funders to build a huge arts/performance center, called the Confluence, to open on the riverbank in October 2018. 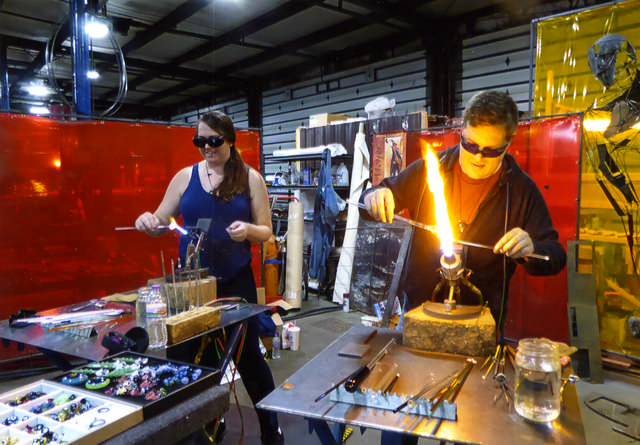 Riverbanks? They’re another of Eau Claire’s lures. The union of the Chippewa and Eau Claire Rivers leads to 100 miles of popular biking/hiking trails. Conveniently, one licks the site of Brewing Projekt, a craft brewery offering flights of three for $4. (Take that, big cities!) Another brewery launched in 2010, called Lazy Monk, favors traditional-style lagers in a German-style setting.

“No TVs, no Muzak: This is a place for meeting friends,” declares owner Teresa Frank.

The young maverick behind Infinity Beverages opened his own winery/distillery in 2010 at age (gulp!) 23 to produce “products you won’t find anywhere else.” Case in point: vodka made from sugar beets and apples. 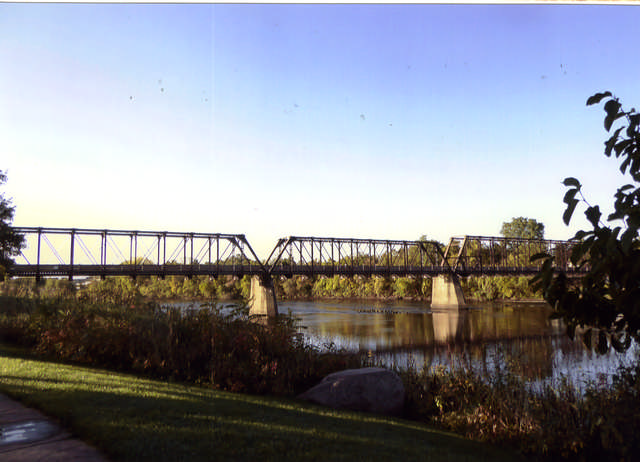 Another young couple runs Autumn Harvest Winery, where apples share the glory with grapes. Pick your own Honeycrisps, put together a picnic (cheese and sausage available) and sit a while to listen to live music, invites the fledgling entrepreneur who took on the family business.

Shopping along that avenue is a big step above the usual tourist town’s tired t-shirts and tacky coasters. Step into Tangled Up in Hue for another dose of local talent in the form of artisan-crafted antler jewelry, crocheted cacti, felted vases, bicycle-spoke bracelets and more. Approach nearby Antiques Emporium with a U-Haul, for if you collect it, they’ve got it (stuffed animals included). Janet Carson Gallery showcases a cleverly curated cache of creative artists. Back at the Local Store, you’ll also find Wisconsin everything: Drink Wisconsinally bottle openers, road-map blankets, loon cookie cutters, plus CDs and books by local authors. Its neighbor, Red’s Mercantile, introduced Eau Claire to stylish women’s duds when owner Becca Cooke, who’d fled to California, returned to her invigorated home town.

The city’s self-guided sculpture walk features 42 sidewalk creations to admire. Which calls for a cuppa, right? Rest your feet at ECDC (homemade pastries, too, including dangerously delicious macarons). It’s housed in the forward Lismore Hotel, boasting a cool bar called Dive, atop the former rooftop swimming pool. Back on ground level stands the town’s most imaginative kitchen, The Informalist, where espresso/chili-rubbed pork belly with pickled ramp pesto and a fried green tomato Benedict made my day (wood-fired pizzas, too).

Mona Lisa’s is the source of well-executed Italian fare. Owner Lisa Aspenson did “local” before anyone else got the message, in dishes like pork tenderloin with fig chutney; gnocchi atop autumn veggies; wild mushroom ravioli; and all breeds of pizza. To satisfy a burger craving, steer to Classic Garage. You’ll spot it by the pink Cadillac owner Rick Payton parks by the pumps and his baby-blue Caddie just inside—sexy advertisements for his Fifties menu, served on Formica tabletops. Rick is one of those Austin émigrés who settled in Eau Claire, as did several of his acquaintances when he spread the word.

“People are kind and respectful here,” he notes. “Coming from Texas, it was kind of unsettling.”

Unsettling, you betcha. Alternative, too. And as exuberantly disruptive as those famous capitols of cool. To stoke your inner rebel, consult www.visiteauclaire.com and head on over.