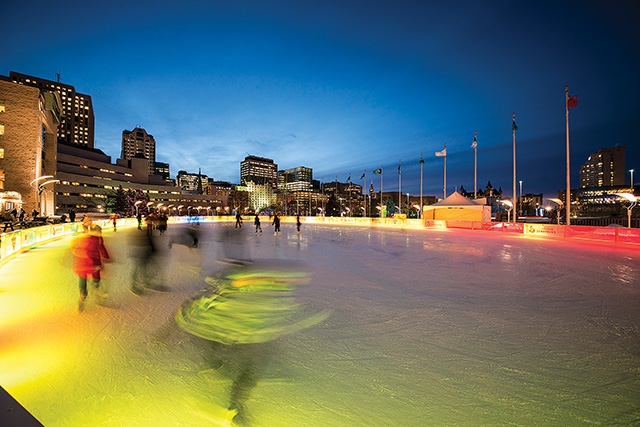 Regardless of the season, the city of Ottawa is a treasure to behold. Photo courtesy of Ottawa Tourism

I’ve just returned from the nation’s capital, and I heart the heck out of it.

No, not our capital. Rather, that of our kinder, gentler northern neighbor, Canada. Ottawa anchors the eastern border of Ontario, springing from a British heritage, while just across the river lies Francophone Quebec—a best-of-both-worlds combo for tourists to savor.

My hotel, the grande dame Chateau Laurier, rises like a castle above the 4.8-mile Rideau Canal, which empties into the Ottawa River. In spring bikers and joggers enjoy the canal’s 750,000 tulips; in winter’s freeze, it becomes a skating path. It’s where the city came into being as a trading post.

Still is. Today, the nearby ByWard Market—block upon block of indie boutiques, lively pubs and dining spots and summer’s outdoor farmers market—is a magnet for locals and tourists alike. A tasty intro is a walking tour by C’est Si Bon, with ten stops at food haunts such as Maple Country Sugar Bush, to discover the difference between light and dark syrup and learn the story of the famous maple sugar heist—“a uniquely Canadian crime,” allows its owner.

House of Cheese provides samples of regional specialties, while a shack called Beaver Tail dispenses this iconic pastry, sprinkled with sugar and cinnamon and served with a squirt of lemon to balance the sweet. Le Moulin de Provence Bakery nearby sells its famous Obama cookie—the one our former prez enjoyed.

Shops like Corazon de Mais (yummy tacos) and steaming naan from Shafala Bazaar hail the city’s multi-culti heritage. Cupcake Lounge ruins your diet with treats like its Earl Grey tea and pineapple-upside-down numbers. Cocktails, too. The finale is a bite from the small-plates menu at Play, a locovore-forward café.

More foodie finds: Riviera, anchoring a former bank building, draws trendsters for its famous pastas (lobster spaghetti, anyone?) abetted by starters like my assembly of Canadian mushrooms lavished with black truffle and a poached egg atop rich brioche toast, followed by a salad of citrus, endive, ricotta and walnuts. Check out the forward cocktail list, too. 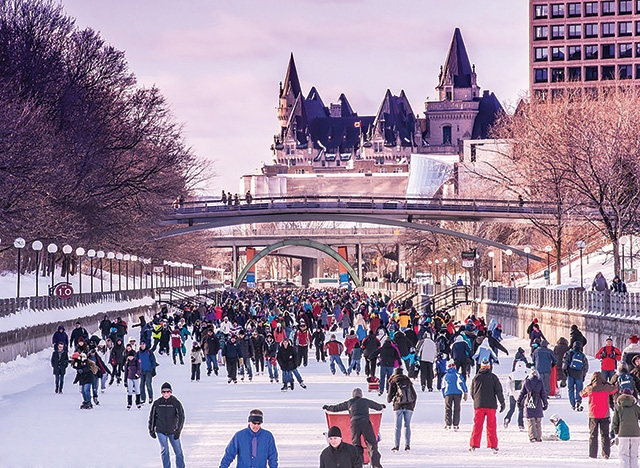 The Rideau Canal connects the city of Ottawa to both the Saint Lawrence River and Lake Ontario. Photo courtesy of Ottawa Tourism

Metropolitain Brasserie draws the Parliament Hill crowd to its raw bar; they linger for classic Parisian fare, ranging from bouillabaisse to steak frites. I slurped my own weight in oysters, then demolished steak tartare, followed by profiteroles. At the Chateau’s La Terrasse—the city’s premier open-air dining destination—savor cheese and charcuterie plates or fork up an elegant salmon tartare. I followed up with a lobster roll, then a chocolate-cherry tart with red licorice sorbet (yes, it works). Swell cocktails again. (This is getting to be a habit.)

After dinner, Parliament Hill is the place to be in summer. Join throngs seated on the grass for the Northern Lights sound & light show across Parliament’s façade, unscrolling the story of the nation’s history. Return in the morning for the heart-thumping Changing of the Guard to watch as kilt-clad pipers precede the booming brass of soldiers in jaunty red jackets and beaver hats marching to “Red River Valley” and excerpts from (huh?) “Don Giovanni” before assembling with musket thumping and clicking heels. Return Wednesdays for noontime yoga or Sunday’s zumba (all of the above are free).

Another fun freebie: the nearby Bank of Canada Museum, far from the yawner you might expect. Create your own avatar (mine: blonde mermaid) to interactively explore finance moves that affect you (inflation, budgeting, etc.)

Must-see museums are Ottawa’s forte, starting at the National Gallery of Canada, designed by starchitect Moshe Safdie and anchored on its plaza by Maman, the mammoth spider mascot sculpted by Louise Bourgeois. Traverse its galleries rich with all the bold-name Europeans, then discover the newly-integrated work of First Nations artists; Canada’s iconic Group of Seven, up-ending landscape painting; and arresting contempo pieces. Scoot over to the brand-new Ottawa Art Gallery highlighting that Group of Seven plus First Nations artists’ modern takes on canoes: one birch, another of cereal boxes.

The Canadian War Museum, a favorite on a previous visit, drew me back to experience war’s unsettling effects. Follow paths depicting Canada’s role in the Boer War (“the dirty war”)—its first international conflict, then the War of 1812 with us; World Wars I and II (wherein Nazis torpedoed Canadian harbors) and ensuing battlegrounds, from Korea to Kandahar. Through newsreels, artifacts and oral accounts the bloody stories are unreeled, asking, finally, “Why does war matter?” A new National Holocaust Museum stands, fittingly, just across the street.

Then cross the river into Quebec for the much more mellow and beautiful Mosaiculture in Jacques Cartier Park. Here (through October 15) 40-plus larger-than-life sculptures are fabricated entirely of plants: an uber-owl; a Chinese dragon; a mega-hunter stalking giant polar bears; a grander-than-grand piano.

From here it’s a short stroll to the Museum of Canadian History, recently reorganized to educate visitors on not only the Vikings’ arrival and accomplishment of the ensuing Brits and French, but also the treatment/extinction of First Nations people and mixed-race Metis.

To mingle with locals, venture into their neighborhoods, too. Head to Lansdowne for its lively Sunday farmers market (crafts and food court too). Continue to the Glebe to patrol avenues lined with shops and eating ops. Detour to the nearby Remic Rapids portion of the river to gaze on the dozens of balanced-rock sculptures artist John Ceprano constructs anew each spring as a paean to nature and meditation on water, he says: “a chance to get out of myself.” And mighty popular.

Hit Wellington Street West to discover indie establishments in which to eat, drink and shop, particularly at Maker House, filled with fanciful all-Canadian products, including wooden bow ties, paper deers’ heads, leather six-pack carriers, and a book called How to Move to Canada.

I’m tempted. To plan your own visit, check out www.ottawatourism.ca.

Canada has a long legacy of acceptance. It was the fourth nation in the world to legalize gay marriage, in 2005. Ottawa’s mayor is gay, and he’s frequently spotted in the city’s Gay Village, says Christian Garceau, organizers of the Village Gay Legacy Project and also affiliated with Capital Pride. He’s guiding me on a walking tour of the Village, via a new app available for self-touring. It documents the area’s rich GLBT history, past and present, pointing out historic gay bars and business establishments—although Christian notes that “gay bars” as such are obsolete today, thanks to wide acceptance everywhere. (Not so back in the day, when Canada once employed a “fruit detector” machine to out closeted citizens—for which Trudeau publicly apologized in 2017.)