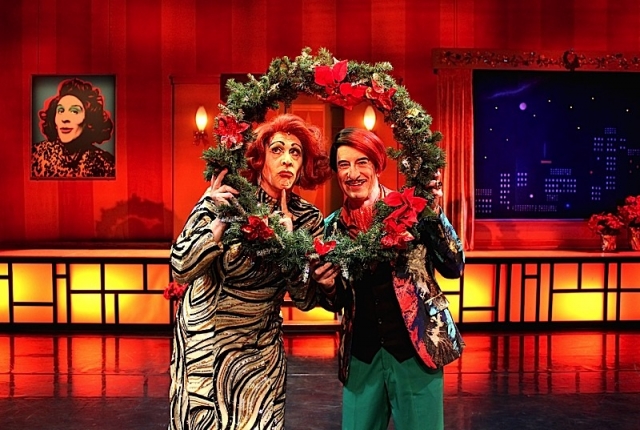 James Sewell Ballet has staged the uproarious Nutcracker (Not So) Suite, a campy spoof which originated in Myron Johnson’s fabled camp dance troupe, Ballet of the Dolls, several years ago. It continues a holiday tradition at the Cowles Cener with a new generation of dancers who capture the vibe of Manhattan’s Upper East Side, 1963, rather than imperial Russia. The setting is enhanced by elegant scenic design by Steven Rydberg and costumes by Stephanie Karr Smith (who herself was a Doll) that reflect the upper crust milieu. As usual, this year’s production is directed and choreographed by Johnson.

This modern re-imagining of gay legend Pyotr Ilyich Tchaikovsky’s classic Christmas ballet is dominated by a gloriously commandeering Bradley Greenwald as Mama Flo. This grand dame’s daughter, Marie (an endearing Stephanie Moffett-Hugg), has been infantilized and raised to live in her mother’s shadow. However, the girl is outgrowing her Barbie Doll fixation and the wonder of real in-the-flesh boys is beginning to bud within her awareness.

Greenwald recalls screen goddesses of Old Hollywood—imagine Lauren Bacall, Gloria Swanson, and Marie Dressler all rolled into one! As usual, his vocals are terrific and Greenwald definitely knows how to punch in those lower tones for hilarious effect. Steven Epp, of Theatre de la Jeune Lune fame, plays Flo’s crusty brother/Marie’s uncle, a role that Johnson himself has played previously. Epp brings a seedy side to the man that plays crisply off the haughty Flo and the innocent Marie. Add to the mix Mary Jo Peloquin as the dutiful maid, who seems to sense those moments when Flo almost takes things a little too far. The chemistry between these four performers simply delights.

At a Christmas bash attended by Flo’s sophisticated friends, all of the guests are played by rhythmically fabulous dancers, shimmying and shimmering to sparkling holiday tunes. These include piano selections by Jerry Rubino. Act Two waxes surreal with fantasy matched with dreamily imaginative lighting imagery from designer Michael Murnane. Da’Rius Malone exudes a sensual edge to the Rat King. The appealing duo of Andrew Lester and Eve Schulte and are kinetically robot-like as Ken and Barbie dolls come to life. Their plastered-on smiles, continually forced, bring to mind Stephen Colbert or The Joker of Batman fame. They have a magnetism that is hard to take your eyes off. Doll veterans from way back, Karr Smith and Julia Sutton, also blend into it all and are still moving beautifully.