Now You See It: ‘The Naked Magic Show’ Reveals All

Or so says Brisbane magician Christopher Wayne, one half of The Naked Magic Show. Wayne, along with his naked magician counterpart, Mike Tyler, will be equipped with a top hat but not much else when they stop at Minneapolis’ Pantages Theatre during their American tour. 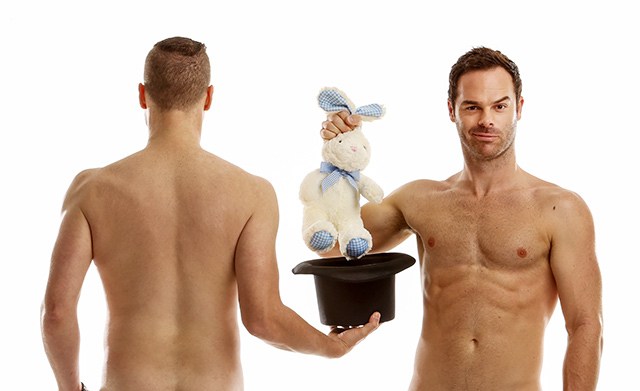 Of course, naked magic wasn’t always part of Wayne’s career path. In fact, he was a pastor at a Christian church in Australia (although he now identifies as Agnostic), and it was actually there that he rediscovered magic as an adult. “The reason I decided to be a magician full time was because I honestly couldn’t think of a good reason to not pursue my childhood dream,” he says. “I figured, ‘What would be the worst thing that could happen if I just tried?'”

As a fan of all things magic, when Wayne sees a good magician perform, he’s enthralled. “One night I was at an event and they had booked a magician (it was Mike) and he was one of the best performers I had seen live,” Wayne remembers. “I asked him to show me a trick, and he ended up stealing my watch without me knowing! I asked him on a ‘bro date’ and we had so much in common, we have been best mates since.”

The two enjoyed successful careers doing regular magic until the male stripping movie Magic Mike was released. They discussed how people kept making Magic Mike jokes to them (“How big is your wand?”, “Can you make your clothes disappear?”) and then they realized…in the history of magic, nobody had ever made a naughty magic show. It was such a simple idea in its core, but Wayne says it has changed their lives. Abracadabra, a show was born, complete with birthday suit.

According to Wayne, there is nothing more vulnerable than being naked on stage; it’s the ultimate trust exercise. “No way was I always this comfortable with my body!” Wayne admits. “I had to lose about 55 pounds (I used an online converter to figure out what pounds were) to get in to shape for this show. We were both magic geeks first and foremost, so we had to make sure our bodies were in prime condition, and we both had to get used to being naked in front of people. Two years on however, I can honestly say that the best part of my day is standing naked in front of a thousand people while they are having the time of their lives.”

And of course, when you are naked on stage, there is always space for things to go wrong. “Our worst injury came when we were doing a photo shoot in Australia,” Wayne says. “We were recreating our now famous poster shot, and Mike had to throw a fireball into the air for the photo for some additional ‘flair.’ The fireball landed right on my penis and gave my job and my hobby quite a burn. The lesson: always keep your penis away from open flames.”

Wayne promises that audiences have never seen anything like The Naked Magic Show, and they promise to deliver what the poster says. “We step up to the plate and deliver what is the naughtiest and funniest magic show that you will ever see, and we guarantee that by the end of it you will have seen everything,” Wayne says. “Honestly, by the end of the show people have tears streaming down their faces from laughter, and the ultimate shock-and-awe expression on their faces from a final act that has to be seen to be believed.”

Wayne describes the finale as magical, rude, shocking, and hilarious, guaranteeing that you will walk away from it in shock and disbelief. “Magically” speaking, the show also features a trick that involves every single audience member — where the magic happens completely in your hands. People always tell the magicians that they can’t believe they got to make magic happen from their own seats.

Since the show began a couple years ago, Wayne says it has grown and evolved, saying it was “really good” at best. But he and Tyler kept working on the show, listening to audience feedback, and spending every spare minute to make parts of the show move faster, to get more audience involvement, to create bigger “Wow!” moments, and to get as many laughs as possible.

“We wanted this show to be unlike anything else on the planet, and we worked on it day and night,” Wayne says. “Two years later, I can honestly say that this is one of the funniest, entertaining, and most unique shows anyone will ever see; which is why we sell out everywhere in the world that we go. I’m really proud of that, and I love that audiences enjoy it as much as we do.”

But beyond the magic, Wayne is also a strong ally for the community. As a straight male, he doesn’t have to be so outspoken about GLBT issues, but he and Tyler are very active supporters of the GLBT community in Australia, something that Wayne says was important to them before they were ever naked magicians.

“There are a few political parties and religious groups [in Australia] that are really outspoken about their opposition to marriage equality and to educating our youth about LGBT issues,” he says. “There is something inside of me that is heartbroken about the fact that in my country, gay people don’t have the same rights as me. Because of my profile as an entertainer I have been given a platform and a voice, and I choose to use that voice to stand up for LGBT rights, marriage equality, and, importantly, to let young people who may be struggling with sexual identity know that they are loved, valued, and cared about as much as any other person.”

The former Christian pastor who cut ties with his former life and beliefs, primarily due to irrevocable differences between the church and his personal stance on gay rights, said that he loves the diversity in the audiences he sees, citing both ladies’ night out as well as a large number of GLBT members of the audience. Whatever your identity, Wayne promises you will have a good time.

“You will never see a naughtier or funnier show than The Naked Magic Show, and we can’t wait to show you our magic wands,” he says, with a wink. “Oh, and one more thing: We’re not naked the whole time. It’s like a first date. We kind of make you work for it.”

The Naked Magic Show
April 28, 8:00 p.m.
Pantages Theatre
www.hennepintheatretrust.org
Must be 18+ to enter.