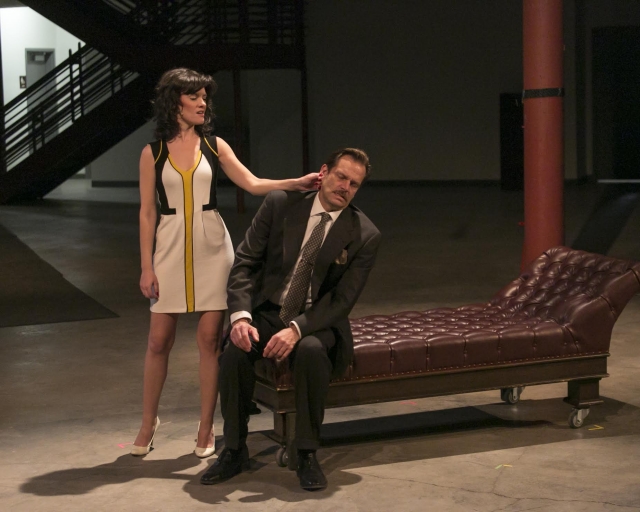 In the late 1950s Harold Pinter (1930-2008) shelved his play, The Hothouse, because he thought it was too far beyond belief. However, as his playwriting career advanced, he deeply explored issues of being trapped and tortured in such remarkable plays as The Homecoming and One For the Road. However, in recent years The Hothouse has been revived and Dark & Stormy Productions has given it a mesmerizing staging at the Grain Belt Bottling House in northeast Minneapolis. This dark comedy has renewed relevance in light of the recent release of the CIA torture report bravely exposed by Senator Dianne Feinstein.

Benjamin McGovern’s direction is more penetrating, passionate, and vulnerable than his very good staging of Pinter’s The Caretaker at the Guthrie a few years back. His actors also electrify as they reveal the play’s searing wit. The Hothouse‘s setting is a sanatorium where a patient has been killed and another impregnated. There is bureaucratized secrecy surrounding the degrading and dehumanizing treatment of those within the institution. Pinter’s use of incomplete sentences and deftly daggered wordsmithing, rendered by the superb cast, enhances the play’s suspicious nature and mystery splendidly. Moreover, there’s an inherent sense of surveillance in the production’s concept as audience members listen to the action they see before them on headsets. The bottling house site is a vast lobby and the miked actors play at various points within that vastness. It’s as if we are always eavesdropping.

Robert Dorfman plays Roote, an aging administrator, who on the one hand is losing his grip on the job, but on the other, is threateningly manic in the service of keeping things secret. It’s a bedazzlingly understated performance that keeps us always guessing about just what this guy has to hide.
Mark Benninghoffen and Bill McCallum create a visceral chemistry as two very different alpha male administrative types who each have a deep-seated need to control things. The endearing John Catron plays Lamb, a naive and sweet-natured staffer, who does not even begin to fathom the mean-spiritedness around him.
A vibrant Bruce Bohne is palbably gritty as Tubb, the refreshingly down to earth sanitorium janitor. But the fact that he’s such a “regular guy” is unsetlling and is perhaps an indictiment of average people in society who turn a blind eye to institutionalized cruelty.
Sara Marsh is an elegant femme fatale in the role of Miss Cutts, Roote’s mistress. She evokes the spirit of film noir as woman who does what she feels she has to do in a man’s world. Gender relegates her to certain limits.
The Hothouse has been receiving acclaimed revivals including this one. And this production is selling heavily. I take all this as a sign that this is a play ahead of its time whose time has finally come.
Note: Harold Pinter won the Nobel Prize for Literature in 2005.
The Hothouse
Through Jan. 4
Grain Belt Bottling House, 79 13th Av. NE, Mpls.
(612) 724-5685
www.darkstormy.org