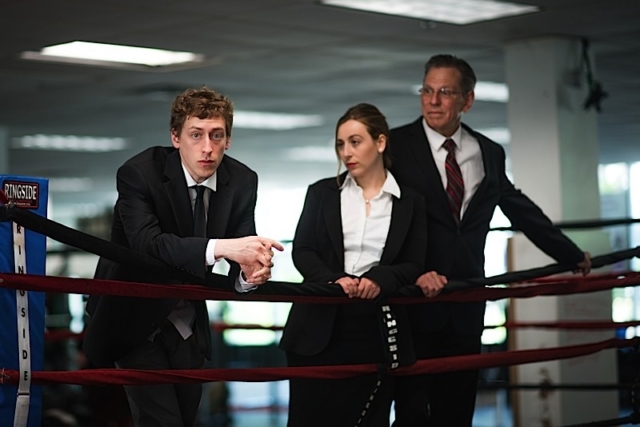 Kari Steinback will direct the debut production of Hypnic Jerk Theatre with a production of Mike Bartlett’s Bull. Office politics are portrayed as a metaphorical bullfight. Themes of bullying and cruelty as a form of entertainment are explored by actors Lauren Diesch, Ben Shaw, and David Wasserman, who impressed audiences earlier this year in Candid Theater’s Peter and Alice. They will perform the piece in a boxing ring set-up. Think of “spectators at a sports event.”

The press information says that “Hypnic Jerk” refers to the involuntary twitch that occurs when a person is beginning to fall asleep, often causing them to awaken suddenly for a moment.  The aim is said to jolt audiences into discussion, awareness, and action. Steinbach, who has recently directed terrific productions of The Caucasian Chalk Circle for Lex Ham and The Metromaniacs for Theatre in the Round Players, says “Bull provides a perfect example of the ways that acceptance of cruelty has seeped into our world—into the workplace, politics, and even our entertainment. Much of reality television has a Darwinian facet to it—where backstabbing and devious alliances are a part of the survival-of-the-fittest ritual.”