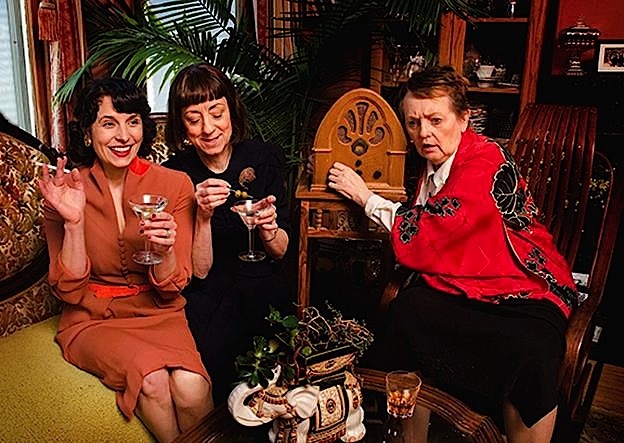 The new theater troupe for women over age 50, Prime Productions, has launched their life with a wonderful production of a vibrantly intellectual play that also sparkles with passion and wit: Steven Carl McCasland’s Little Wars. The performance space is at Mixed Blood Theatre and even if  you don’t have a degree in literary studies or women’s studies you will likely find the piece to be filled with humanity.

Little Wars imagines a fictional salon-style meeting in southern France on the eve of the Nazi occupation. Director Shelli Place’s superb cast captures viscerally and palpably that impending political breakdown as the play progresses from beginning to end. You know you are in the hands of first-rate artists when you can actually feel that shift. Not to mention the shifts that occur interpersonally between the characters themselves.

The women are some of the major writers and patrons of the time, and frankly, for all time: Gertrude Stein and her wife, Alice B. Toklas, Agatha Christie, Lillian Hellman, and Dorothy Parker. Also featured is Muriel Gardiner who aided in the escape of Jews out of Nazi-occupied areas.

McCasland’s script is drenched in alcohol and out of this the women reveal true and hurtful feelings about one another and various other things, including the political climate. The only character that didn’t feel truly written was Hellman, though actress Vanessa Gamble renders the character as written, exceedingly well. But Hellman had a grittier edge to her and her sympathies for the Marxist dream were very much a part of her essence. Yet McCasland doesn’t delve into this. Indeed, most of Hellman’s plays, other than the lesbian drama classic, The Children’s Hour, exuded a strong skepticism (at least for capitalism): The Little Foxes, Another Part of the Forest, and Days to Come.

Nonetheless, the others are vividly captured by the playwright and the cast. Candace Barrett Birk’s Gertrude and Sue Scott’s Alice anchor this production with splendidly subtle power and are the very picture of women at intimate ease with one another. Alison Edwards nicely reveals a progression within Agatha that goes from crisp to compassionate. Laura B. Adams brings a glamour and a strong femininity reminiscent of the popular films of the time. Elizabeth Desotelle balances likability and sarcasm to satisfying effect. A masterful Miriam Schwarz delivers a wrenching, yet underplayed turn as a maid who has endured horrors particular to the time. The ensemble embodies an era that we still need to ponder and learn from.