Lavender comes out with a new issue every two weeks, each one covering a new restaurant or food and drinking topic in some way, shape, or form. In a place like the Twin Cities, a hotbed of culinary delight, we do our best to keep up. To that end, I want to shine the light on a few of the places that have opened recently that you should know about and what I find to be enchanting about each of them. 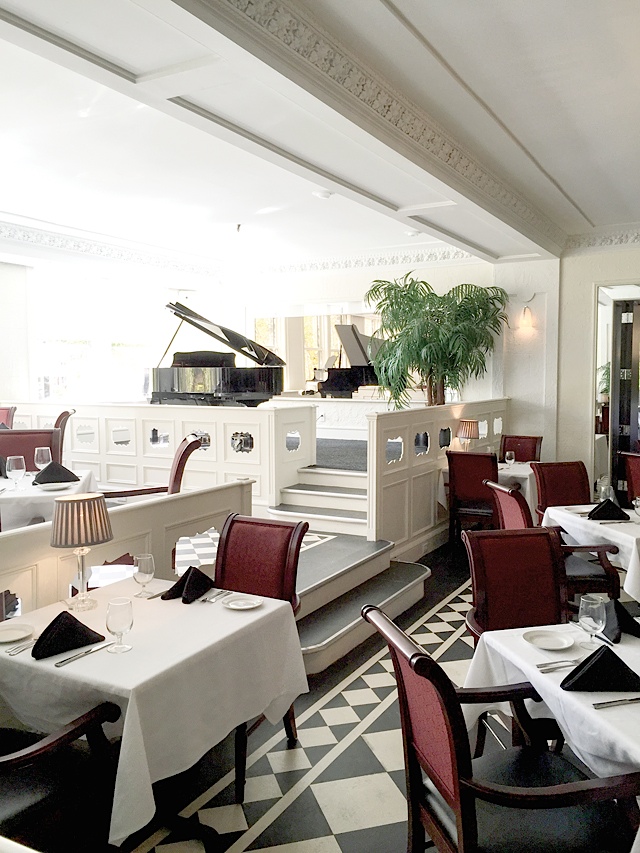 Brought to us by the same group that has W.A. Frost and Company, the University Club of Saint Paul, the Saint Paul Athletic Club, and Stout’s Island Lodge, Commonwealth Properties has gifted us with a gleaming gem: The Commodore Bar & Restaurant. The Commodore opened as a hotel in 1920 and is now condominiums. Though the space for the restaurant and bar had been used for private events over the years, the recent overhaul of the art deco bar and restaurant seating in its first floor has brought it back to life for the public. Hailing a time when F. Scott Fitzgerald lived within its walls and bootlegging was a thing, the drinks are made with Gatsby in mind and the spirits all come from within “bootlegging distance,” so, they’re local. I recommend gussying up and getting reservations for the dining room, or bellying up to the bar for the Commodore Burger with gruyere and fries. 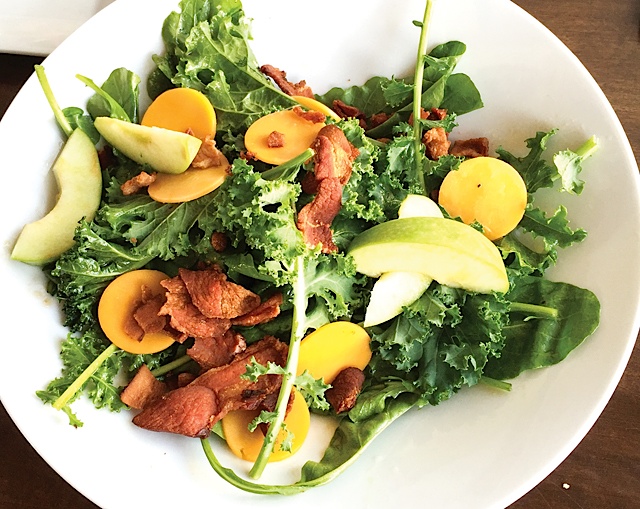 A day trip that tends to be common among Lavender readers is a jaunt down toward Lanesboro. Or, some make a weekender out of it, hitting the Root River Trail, some antique shops, as well as one of the many gay-owned bed and breakfasts in the area — something that I recommend highly, as do I recommend going a little further south to Harmony, for Estelle’s. In a small town that’s known for having the biggest Amish community in Minnesota, there is this new eatery (opened in July 2015) that won me over in moments. The decor is both light and rustic, the people are friendly, and the food is superb. I’d heard that the duo behind the restaurant, Matt Brown and Heidi Harstad, had experience at Travail, Pig Ate My Pizza, the Rookery, and Haute Dish, so to say that the squash soup that changed my life started as a bowl of food bits and a puff of cotton candy that was dissolved by the soup as it was poured over it is neither a surprise nor an oddity. That it tasted so good was downright staggering, though. The sandwiches, salads, and desserts we devoured all had the same effect on us: they made us smile and wish for more…as did learning from our server, a lifetime friend of Heidi’s, that the restaurant is named for Brown and Harstad’s infant daughter. A delight of a place. 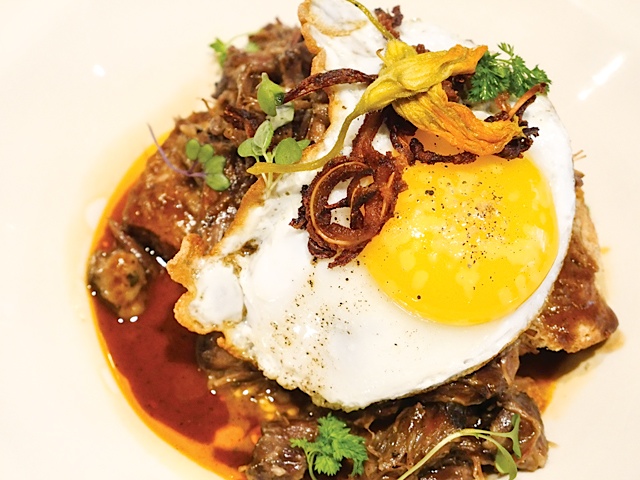 One of the most impressive renovations in recent history is this newcomer to Mears Park in St. Paul, Handsome Hog. What had been Bin Wine Bar, a not-unattractive space itself, has been completely redone to become a sophisticated, savvy setting for a contemporary Southern restaurant. While I’m handing out blue ribbons for design, let me also say that it’s “Some Pig” that Chef Justin Sutherland’s putting out. Open for lunch, dinner, and late-night noshes, the Handsome Hog has all the bases covered from cocktails to charcuterie to entrées to dessert. My non-hog personal favorites included the Chicken N Waffles (rosemary and pear-infused waffles, buttermilk fried chicken, honey cayenne butter, and bourbon maple syrup), Hushpuppies (made with crawfish, roasted corn, and smoked green tomato relish), the Beef Short Rib (with potato wedges, mustard greens, smoked trumpet mushrooms, and pickled watermelon rind) and a decadent dessert of Smoked Peaches & Cream (vanilla cremeux, grilled peaches, smoked candied almonds, peach ice cream, and smoked almond milk). And that I can hit it up before or after a Saints game via the Green Line LRT is only a bonus. It’s a renovation for not only that space, but for the food scene over at Mears Park. 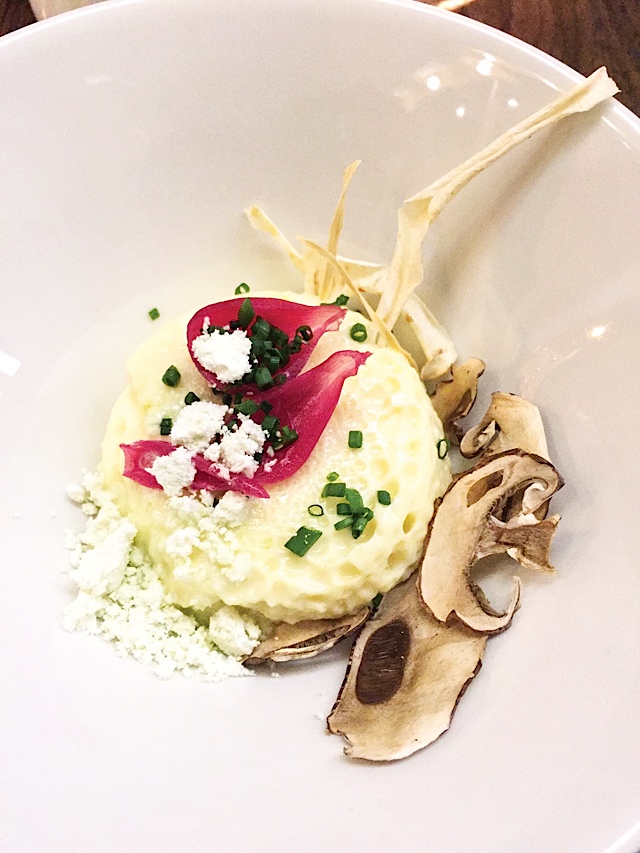 The Merriam Park neighborhood of St. Paul has been hankering for a place like Heirloom. Some have called it a restaurant desert, I’d just call it ripe for the planting. Living fairly close to this newcomer, I want to give a heart-felt welcome to the place that’s dishing up what they call “modern farmhouse cuisine.” Chef Wyatt Marsh is taking what is seasonal and both serving and saving it; giving us what’s fresh in spring and summer as well as preserving it for fall and winter. I like the concept, I like the execution. The service has been earnest, the space is inviting and I’m looking forward to my brunch reservations there this weekend. For supper, I’ll tell you that while I ate my way through a fair portion of the menu, my short list includes the must-have Parsnip Custard (with pearl onions and mushroom and parsnip chips), the Ricotta Gnocchi (with N’duja sausage, bitter greens, and duck egg), the Pork Jowl (with sweet potato puree, sour cabbage, and cranberry) and the Carrot Cake. 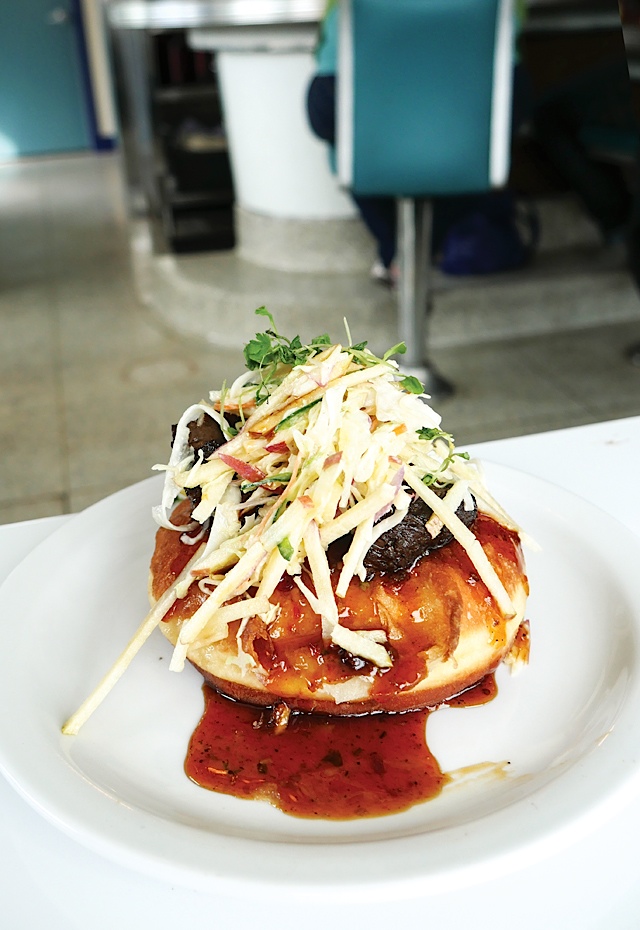 The newest Pennsylvania import to Minnesota is the 1957 Fodero diner on Lake Street, called the Hi-Lo Diner. I was able to buzz in there on their second day of business and taste for myself what they’ve got going on in that sleek, silver fox of a restaurant. Be sure to order one of their boozy shakes or other cocktails and then settle in for their signature Hi-Tops: fried dough with your choice of toppings. What’s basically a donut disc becomes a vehicle for their cheeky and tasty interpretations of pop-culture nods like the Gary Coop-er (topped with buttermilk fried chicken, maple-bourbon syrup, country gravy, and micro arugula) and the Kim Jong Yum (topped with braised Korean short rib, simple glaze, apple-bacon slaw, and wasabi micro-greens), which will be my go-to Hi-Top. Be sure to also try The Commercial (a white cheddar biscuit smothered with prime rib, beef gravy, whipped potatoes, horseradish cream sauce, and scallions) and the Crispy Chicken Sandwich (with apple-bacon slaw, Hi-Lo pickles, and garlic aioli). Brought to us by James Brown and Mike Smith of Forage Modern Workshop and Brownsmith Restoration, along with Pat McDonough and Jeremy Woerner of The Blue Door Pub(s), I have no doubt that this Hi-Lo venture will also succeed. 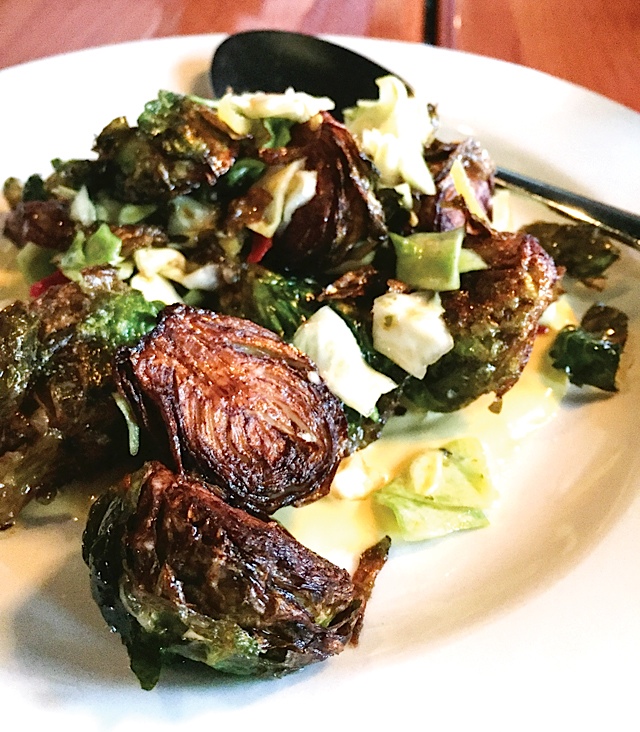 There was a time when I’d drive down Randolph Avenue in St. Paul to get to a former favorite called the Mildred Pierce Cafe. Time passed, the restaurant didn’t make it, and it became a fond memory. Today, thanks to the opening of Mucci’s Italian, I can make the same trip and end up with a new and improved destination with its own food memories, brought to us by way of Tim Niver and Chef Chris Uhrich. Niver also owns The Strip Club Meat & Fish as well as Saint Dinette, and this new venture will undoubtedly be as successful, if the lines at opening are to be any indication (they don’t take reservations so arrive for opening or prepare to wait…and it’s so very worth it). Listen carefully to the daily specials (the pasta with lamb meatballs, wild mushrooms and kalamata olives was lip-smackingly good), but be keen on what’s laid out before you in the menu. The deep-fried pizza dough delivers savory flavors (trust me that the Kenzie Jo with crème fraîche, pears, pecans, pancetta, mozzarella, and red wine reduction is even better the next day) and the Brussels sprouts are killer. Get the Tiramisu. It looks like a slab from your grandma’s 9 x 13 aluminum pan, and it could very well be, if your grandma could make Tiramisu this good. Mucci’s is comfort food at its finest. 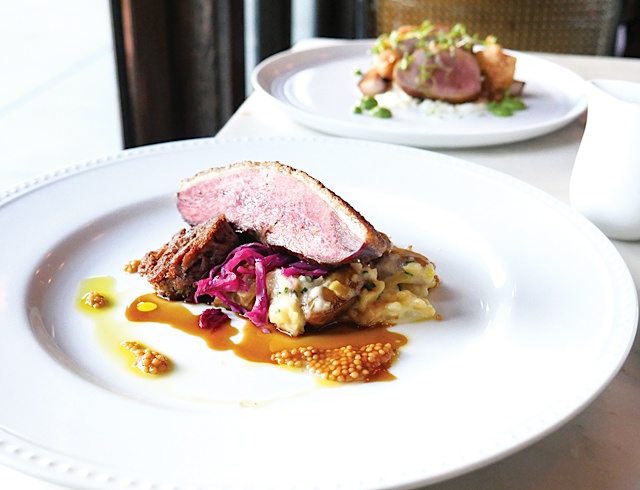 South Minneapolis has gained another fine restaurant by Steven Brown of Tilia; this time, the former Lynn on Bryant space has been transformed into a welcoming French oasis, St. Genevieve. When I arrived on an unseasonably warm spring day, I was seated in the sun next to an open window, happy to be basking. I could have sat there for hours. Wait. I did sit there for hours. The sun went down, the floor-to-ceiling windows were closed, the ambiance changed to be more lively as the volume went up, contained by the walls and windows. The menu offered up a number of options; my favorites were the small plate of Leeks (braised and topped with truffle vinaigrette, speck, and parmesan), the Ribeye Tartine (with grilled ramps and wheatberry), the Pork Tenderloin (with cheese grits, celeraic remoulade, onion puff, and pork belly), and my first rhubarb of the season on a Crème Fraîche Panna Cotta (with cardamom shortbread). Sparkling drinks flow, the staff is convivial and I drank in the joie de vivre. What more could I want? Je ne sais pas.