“New Electric Ballroom” Cryptically Cautions Against Staying Stuck in Your Past 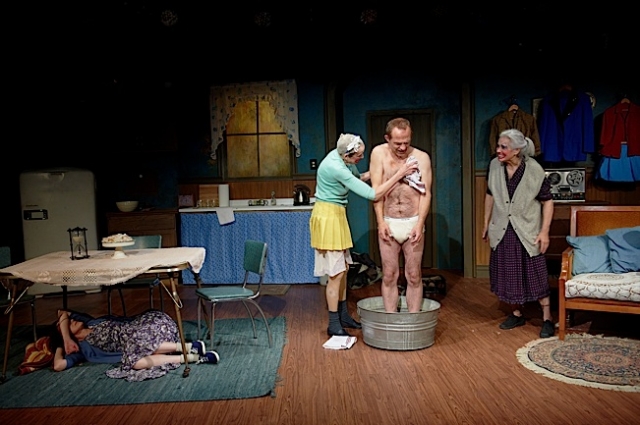 Think about someone you know, yourself included, who fixates on something dreadful, real or perceived, that actually happened to them at some point long past. Because you are an empathetic person you may well let them talk about it, because that may be something they need to do to move on. And it may give you the chance as the listener to learn something about human nature.

But when that person cannot let go of the memory of that wounding event, however awful it was, they will in some way, infuse the energy around them with that woundedness. This can become toxic. This pattern of enabling those who can’t/won’t let go, typically starts in childhood, often with a parent,  a friend of the family, or another relative, who inappropriately burdens the child with baggage that the little one has no capacity to process.

Imagine a 40 year old woman whose much older sisters have replayed a determining negative event, charged with sexuality,  that happened to them when they, the older ones, were just discovering they ways of (heterosexual) men. And imagine that the 40 year old has been internalizing this negativity since she was a girl. The older sisters have determined their attitudes about men, sex, and romance out of this one single event of decades before this and have lived their lives according to the post-adolescent conclusion they drew way back then.

Moroever, the older sisters actually act these experiences out on a regular basis in their home. They even use an outdated tape player for sound effects, an example of how they perversely live in the past. And the home, which is their own egocentric little personal theater, has no visitors except for a kindly fishmonger who all of them are perfectly rude to.

And you guessed it, they rarely, if ever, leave the house.

Irish playwright Enda Walsh’s captivating The New Electric Ballroom takes this wound fixation to an extreme conclusion. Frank Theatre is presenting a haunting production of the play at the New Century Theatre.

Breda (Melissa Hart) and Claire (Katherine Ferrand) act out their bad experiences daily. These splendid veteran actresses play the roles with grotesque flair. Hart elicits a palpable sense of traumatization. Ferrand contrasts her beautifully as someone who has reverted to childhood. I loathe the excessive way so many theater people are using the term “fearless” these days, but in this case, Hart and Ferrand are legitimately that.

These victimized sisters have now victimized their 20 years younger sister, Clara (Virginia Burke). She has never known love because the older ones have damaged her ability to simply trust the life force and herself. When a fishmonger named Patsy (Patrick Bailey) pops in intermittently throughout he is treated with disdain. The irony is that the sisters complain about the pettiness of the locals their home town throughout but we see that they have shabby manners and a whole variety of prejudices.

Burke brilliantly reveals the perils of taking in the negative vibrations of others over a long period of time. Bailey is endearing and sweet, so the older women’s callousness, especially Breda’s, has a cruel edge.

Director Wendy Knox has penetrated the deeper meanings beneath the words and has conducted the piece like chamber music that pauses and then revs up and then onto another rhythm. This compels her actors to cast a spell upon the audience. This is also served by an enchantingly, yet hauntingly nostalgic sound design by Michael Croswell.