A Honeymoon of Music, Art, and Eats in Nashville: So Cool, It’s Hot

Whatever is in the drinking water, I want some: Nashville is on fire. People are moving in to the tune (sorry!) of 94 per day — creative spirits, not accountants. Once-gritty neighborhoods are morphing into hot spots at the speed of light, and the once-moribund downtown shimmies with a reborn vibe. A small town with a big attitude, they all tell me. 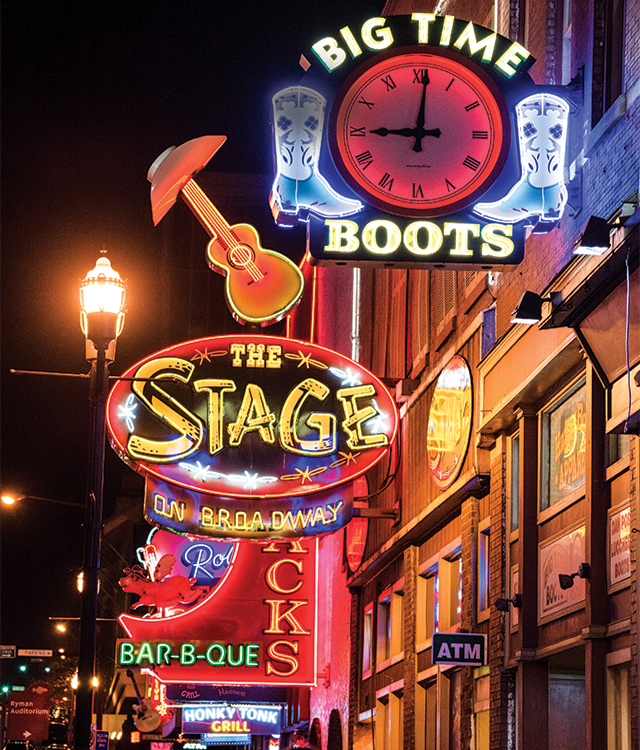 Neon lights on Broadway at night in Nashville, Tennessee.

Blame it on the music. “If you’re a songwriter, this is the only place to be,” declares Kentucky farmboy-turned-album-idol Jeremy Spillman. When people talk of “the industry,” it’s the one involving guitars and microphones.

Putting its money where its vocal cords are, Nashville’s music institutions have undergone massive expansions, filling new spaces with interactive features that make them even more engaging, starting with the Ryman — originally a church, converted to an auditorium. Today it’s the Mother Church of Country music, where the Grand Ole Opry got its start. If its ghosts could talk, you’d hear the voices of Patsy Cline, Bruce Springsteen, and James Brown among the choir.

Close by on Music Mile, the Country Hall of Fame also grew in order to showcase exhibits like the story of Sun Records’ Sam Phillips, the white guy first credited with understanding black R&B and first to record Elvis. Memorabilia, film clips, and recordings trace the history of Country — “always about real people, real lives” — from rough roadhouses to the stages of the present. Another display pays homage to the historic, and then-controversial, entrance of Bob Dylan to the country scene with Johnny Cash. Declared Dylan, “Johnny is your North Star; you guide your ship by him.” And with that endorsement, America came on down.

And they heard, “Hello, my name is Johnny Cash.” A new museum dedicated to the Man in Black celebrates his life and songs, decade by decade from the ’50s on. In April, a similar museum opened to honor George Jones, the man in the “storybook marriage” (well, for a while) to Tammy Wynette who later slipped from bad to worse. The rumor on the street is that in 2016 they’ll film the story, “No-Show Jones,” with Brad Pitt and Sandra Bullock.

Facing the Music City Walk of Fame waits a bus to truck fans to RCA’s hallowed Studio B, where, declares Brenda, our guide, “you’ll step inside the most important recording studio in the world” — think Charley Pride, Hank Snow, Willie Nelson, and, of course, Elvis. That Steinway? The one he played at 3 a.m. recordings. 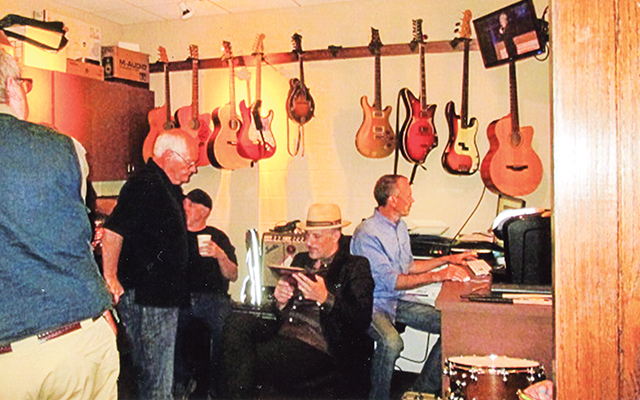 Art for the Eyes

The vibe from the musical talent lures visual artists, too, armed with brushes, cameras, and, like Alan LeQuire, a sculptor’s chisel. He’s the creator of the supersized Athena holding pride of place in The Parthenon, a temple to the arts constructed for the city’s 100th birthday in 1896 to underscore Nashville’s claim to culture as “the Athens of the South.” In LeQuire’s studio, where he’s currently creating a sculpture honoring women’s suffrage, he chats about the surge of “Nashville’s vibrant arts scene” — a flame he fans by offering weekly open-studio nights, a come-one, come-all chance to sculpt from live models.

LeQuire is also represented at Haynes, a primo West End gallery claiming Contemporary American Realism as its focus. From there, it’s a short stroll to downtown’s beauty queen, the Frist. The museum emerged in 2001 from an ultra-gorgeous WPA-era post office, whose classical façade leads to Art Deco eye candy within. It hosts traveling shows, such as the upcoming exhibition of Italian sports cars. “Hustle!” decrees Mancil, docent extraordinaire, as we stand, open-jawed, gazing at the building’s lovely bones.

Anchoring the nearby Fifth Avenue Arts District is The Art Company, founded to honor regional Tennessee artists 20 years ago “when downtown was boarded up,” reports its manager. “Now we have 20 galleries and a First Saturday Art Crawl.” Nearby, Rymer Gallery blows our mindsets with its show of animals created out of Crayolas. (Outside, a plaque reminds us that this was the site of Civil Rights sit-ins in the ’60s.)

In 1994 the arts scene expanded to the Wedgewood Houston neighborhood when Zeitgeist Gallery opened in what now blooms as a cultural incubator. “We’re the shock troops,” says its manager, intent on fostering “conversations coming out of artists’ studios” as well as hosting concerts by Nashville’s new breed of contemporary classical composers. Next door, David Lusk Gallery represents 30 mostly Tennessee artists in solo shows. 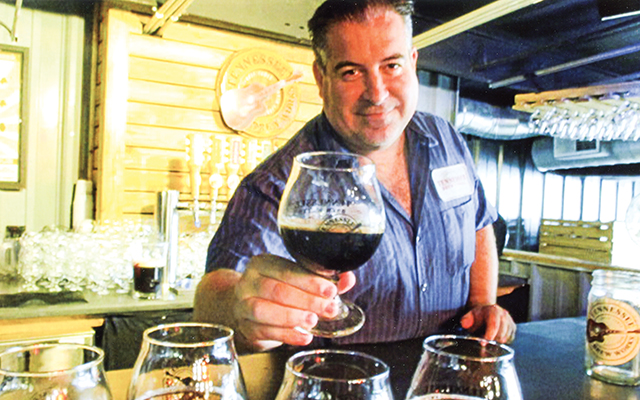 Art on the Plate

Not long ago, the town’s creatives got fed up with boring eats. Vanguard chefs got the message and moved in. Today the food scene is national news. Says Randy Rayburn, owner of Midtown Café, “In my lifetime, Nashville’s gone from meat-and-three [sides] to chain restaurants to ‘imitation’ fare — French, Italian, fostered by our inferiority complex — to an explosion of creative food.” Sample his signature artichoke-lemon soup as proof.

At Mason’s, in the Loews Vanderbilt Hotel, its out-there crab cake corn dog made it to The New York Times. Don’t miss the peach truck peach salad, the shrimp with antebellum grits and tasso ham.

“Creative people want to be around other creative people,” they tell me at Capitol Grille, anchoring the grande-dame Hermitage Hotel. Here chef Tyler Brown reinvents Southern fare such as sweet onion bisque with brie grilled cheese croutons and bacon; hanger steak from the restaurant’s own farm, served with field pea ragout, turnip and celery mostarda; and an uber-Southern coconut cake.

The flat-out hardest rez to snag is for The Catbird Seat, the Southeast’s answer to The French Laundry. Diners at the 35 seats fencing the working kitchen walk away stunned but smiling from prix-fixe fare that includes beef tartare with snail eggs and begonias and, for dessert, ice-box pie ice cream sandwiched between salad greens. Today it’s helmed by Dublin-born Trevor Moran, but it’s our own Erik Anderson (Sea Change) who put it on the map; he recently returned to Minneapolis to open Brut with fiancée/chef Jamie Malone. 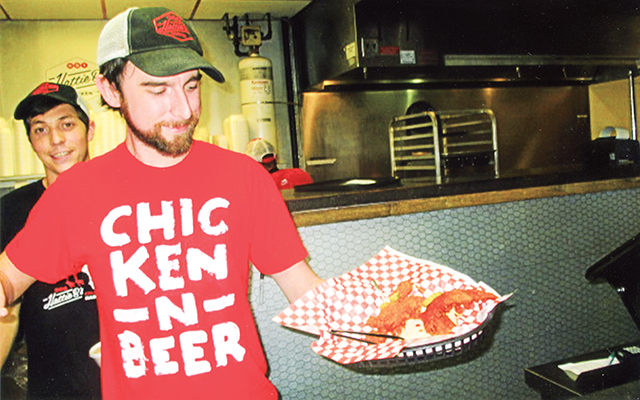 Can’t leave Nashville without baptism by its legendary hot chicken, done best at a dive called Hattie B’s. Join the line for the fowl crisp-crusted in fiery-to-fierier chili batter. When the guy in front of me ordered Damn Hot, the counterman furrowed his brow and with concern inquired, “Been here before?” For a tasty overview, join a Walk Eat Nashville food tour (www.WalkEatNashville.com).

Something else is brewing, too. Chris Spears launched Tennessee Brew Works in 2013 to take his home-brewing passion to the ultimate level. Southern Wit, a Belgian-style white ale, is his best-seller, the Basil Ryema, a farmhouse ale with Thai basil, his most talked-about. Beer-cum-yoga Saturdays, too. Stay for the kitchen’s smorgasbord platter of cheese, charcuterie, and more.

Green Briar Distillery, founded in 1870 by the Nelson family but shuttered in Prohibition, was rediscovered by Nelson brothers Charley and Andy and revived to turn out sour mash Tennessee whiskey (tours and tastings). Different from bourbon, we ask? “Mellower and softer,” Charlie swears.

To plan your own experience, click on www.visitmusiccity.com. And to check out the GLBT buckle in the Bible Belt — bars like Tribe, Play, Blue Genes, restaurants, gay-friendly hotels, and gyms, visit www.Nashville.gaycities.com.